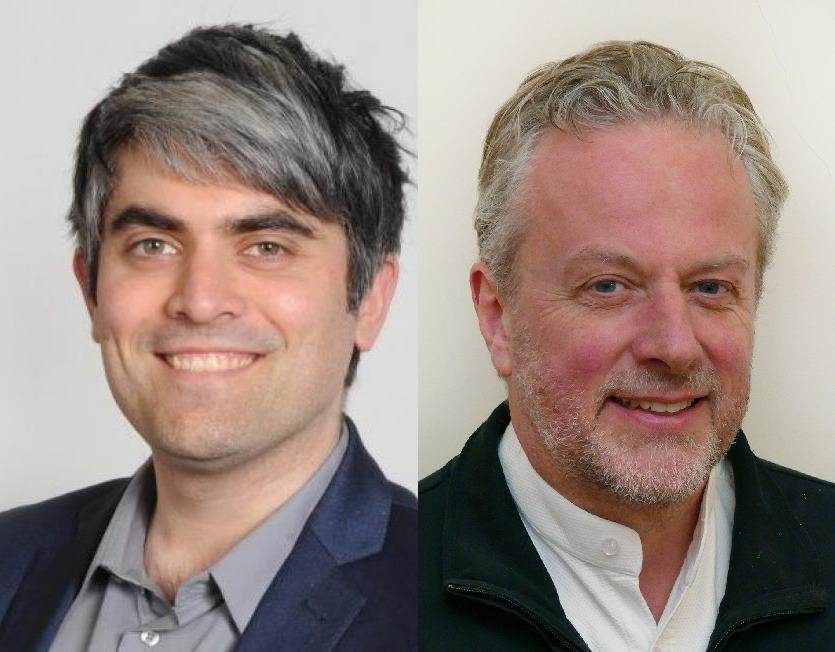 Councillors Aaron Hawkins (left) and Lee Vandervis were comfortably ahead of other contenders in an unscientific poll run on ODT.co.nz. Photos: ODT files
An unofficial online poll suggests the fight to become Dunedin's next mayor may be turning into a two-horse race, although candidates and commentators are urging caution over the results.

The Otago Daily Times poll, published on Saturday, invited people to choose their preferred candidate from the field of 14 seeking to replace outgoing Mayor Dave Cull.

Some councillors were reluctant to comment on the results, including Cr Garey, while Cr Hawkins would only say the election was ''obviously going to be close, and every vote will count''.

Cr Whiley said the poll results were ''interesting'' but reflected only the social media presence of Crs Hawkins and Vandervis, rather than the views of the wider Dunedin electorate.

His own mother had been able to vote in the poll, despite being in Australia, showing how the results could be skewed, he said.

''I'm quite comfortable with where I'm at.

''I think it's a very interesting poll, but does it concern me? No. It's not a first-past-the-post election. It's a single transferable vote election,'' he said.

Editors note: The poll results will continue to change as more people vote

Cr O'Malley said most people voting would not have heard him speak yet, and he hoped they would ''hold judgement'' until they had.

Cr Vandervis did not respond to a request for comment.

The ODT poll was open to anyone, regardless of where they lived, and people were able to vote more than once.

The results shifted throughout the weekend, as Cr Hawkins jumped out to a big early lead on Saturday, after sharing it on his social media pages, before Cr Vandervis closed the gap as more of his supporters tuned in.

Prof Janine Hayward, of the University of Otago department of politics, said the poll showed only first preferences and was ''limited'' in its ability to predict the outcome of an STV election.

That had been underscored in Wellington in 2010, when incumbent Mayor Kerry Prendergast led on first preference votes but was beaten by Celia Wade-Brown as second and third preferences came into play.

''The really interesting question which can't be answered by this poll, relates to the least popular candidates, who will be eliminated as the vote count proceeds. Who will the people who vote for those candidates rank next on their ballot paper?

''Whatever happens, the Dunedin mayor will be elected by a majority of votes and all voters can be confident that their vote matters and it can make a difference in this election.''

The choice is so easy between the 2 leading contenders; one is a spend and tax person (Hawkins) and the other asks questions about value/necessity to the ratepayer (Vandervis). You choose.

I agree. Mr Hawkins is a greens anti development man. Mr Vandervis wants sensible, affordable progress.
Do we want more cycle paths and bridges to no where or do we want a developing progressive city where people can afford to live?

I will not be voting for any candidates openly campaigning for a national political party. There is a concern about independence and not putting the city first. Mr Hawkins is representing the far left Green Party. He otherwise seems like a nice person.

I agree. Hawkins seems like a real nice guy with good intentions but he is all spend, spend, spend. It's like he is scared to say no to anyone. Being everyone's friend does not make you a great leader. Not a man I would want at the top if a disaster hits. And do we really want to be borrowing upto our eyeballs? What if there is a crisis? Only Auckland and Christchurch have more debt than Dunedin, and we are only behind Christchurch because of all the borrowing they had to do after the earthquakes! A free bus going round in circles burning fossil fuel is not going to save Dunedin from the effects of global warming either.

"The Otago Daily Times poll, published on Saturday"
"The ODT poll was open to anyone".
Not to me it wasn't, there was no link etc anywhere to point me in the right direction.
Makes me wonder how much bias this supposed 'poll' has when it is non existent.

Ed replies: The poll was running on the website over the weekend.

Don't agree with doing such a poll where people can vote more than once. You can go to your computer and vote, then open up the browser on your phone and vote again! It's worse than unscientific it's potentially highly misleading and will lead the public into thinking its a two horse race when it potentially isn't.

The plethora of candidates in the running is going to work in Lee Vandersis' favour. He has his followers and they will vote for him. The other voters are now going to end up splitting votes around the rest. You could probably drop 10 candidates and Mr Vandervis' percentage wouldn't change while the remaining few would.
STV for mayor??? Only one mayor can be elected so it is FPP surely.

I'm not a fan of STV either. I believe it will always favour the least disliked, not the one most would want as a leader.

Agree. A few should drop out so Vandervis is put aside yet again.

Amazing given the size of Dunedin our choices are so limited. Most people in Dunedin are living hand to mouth with an average income of $56,000 per year...less than two-thirds of that of Wellingtonians BUT we do have some GREAT bike lanes. I would hope people in Dunedin would focus on electing candidates who have actually done something other than pontificate about the way things should be be in a perfect world. Unfortunately they wont and the quality of life here in Dunedin will continue to slip closer to the third world. Myself, Im not going to vote because it doesn't matter who wins; Dunedin is doomed thats why Im moving to Invercargil where the leadership isn't clueless! Good luck Dunedin, as the economy continues to get tough investing in bike lanes isnt going to put food on anybodys table!

I'll vote for the guy that's got the simplest answers. Who needs complexity in today's world anyway.

Can someone please clarify how STV works in the context of the mayoral race.

Basically you rate from 1 to 14.
Your number one choice gets 14 points, #2 gets 13 points and so on. That's kind of it basically.
This way people like Vandervis may get a high portion of #1's but very few #2, 3, 4, etc.
It will be the 2nd, 3rd and 4th choices that will bring the winner to to the front.
One thing to concider is that if Vandervis is elected he will not be able to push any of his ibjectives forward due to a very low support level. Anything he tries to action will be shot down. Then he dose his jump up and down and threaten people and will most likely be removed. I don't think he understands that as mayor he is not the king pin that calls all the shots.

It is rather unfortunate for the other candidates. If it was not a two horse race then, it certainly is now.