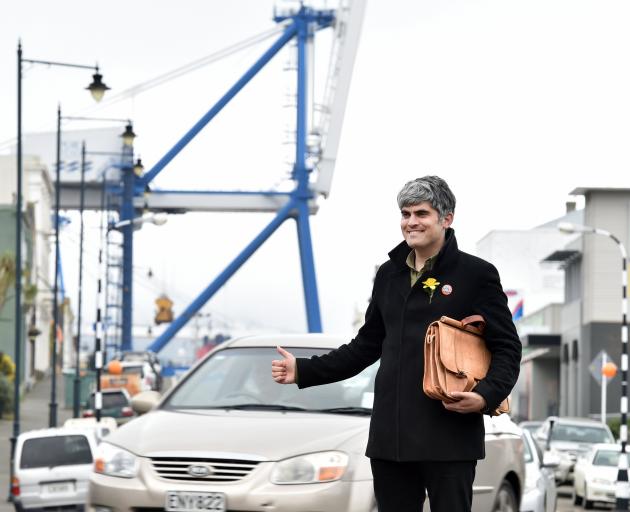 Dunedin mayor-elect Aaron Hawkins says hitchhiking to work from his Port Chalmers home is more efficient and gives him a better understanding of community views. Photo: Peter McIntosh
Dunedin's next mayor has no plans to give up hitchhiking to work, despite his new job.

Aaron Hawkins (35), a two-term Dunedin city councillor and now the city's mayor-elect, has become a regular sight on the side of the road at Port Chalmers, waggling a thumb at passing traffic, in recent years.

He said yesterday he had no plans to change the habit, despite his victory on Saturday, and had already turned down the use of a mayoral car as part of his new pay packet.

Mr Hawkins, who lives in Port Chalmers, said he preferred to hitchhike to the city in the mornings and then catch the bus home later in the day.

Hitchhiking was quicker and a more efficient use of time than catching a 7.50am bus to make a 9am meeting, he said.

But it also gave him 15 minutes of ''unfiltered'' views from those who picked him up, be they friends or strangers, offering a fresh perspective on the community's views, he said.

''Some people had no idea who you were, and that was always great.''

The hitching habit had also been born of necessity, as neither Mr Hawkins or wife Anya Sinclair held a driver's licence when they moved to Port Chalmers several years ago, he said.

Mr Hawkins had always lived in the city, and either walked or caught a bus, but Ms Sinclair was seven months pregnant when they arrived in Port Chalmers, he said.

As a result, both started learning to drive, but disaster struck in 2016.

Ms Sinclair, by then on her restricted licence, was driving Mr Hawkins and their baby son Emile to Christchurch, when their car struck black ice while travelling at close to 100kmh.

''We just kind of started fish-tailing and then smashed into a power pole where my elbow was, and then rolled and landed upside down.

''Our son ... came out of his car seat when the car rolled and [Anya] climbed out from underneath me and picked him up in a pile of broken glass.''

Ms Sinclair and their son both escaped serious injury, and Mr Hawkins received a badly broken arm. Police later described the accident as ''near fatal''.

''It certainly dampened my enthusiasm for driving a motor vehicle. That kind of anxiety hasn't been particularly conducive,'' Mr Hawkins said yesterday.

Now, instead of taking up the offer of the mayoral car, Mr Hawkins would receive a slightly higher annual pay packet, of $166,500.

Mr Hawkins said he had no plans to stop flying to China, as the head of future mayoral delegations, despite the resulting CO2 emissions.

Mr Hawkins pointed out the trick to tackling climate change was a bit bigger than his personal travel plans.

''I think maintaining the relationship we have with China is important.

''I think focusing on individual action as a solution to the zero carbon transition is a red herring, when we need structural and systemic change.''

Also, hitchhiking to work would go some way to offsetting those flights, by reducing his carbon footprint, and deliver other benefits for the disaffected.

''The irony of the whole campaign is that it is my election that has freed up a car parking space.''

Mr Harkins is wrong. It is only by focusing on ones individual action that structural and systemic change will happen. If he was ordered to exterminate people because of their race or religion would he use the same argument? Or would he call on his comrades to take individual action and force a change.

That says it all 'Hawkins said he had no plans to stop flying to China, as the head of future mayoral delegations, despite the resulting CO2 emissions' Yep just punish the people of Dunedin by removing carparks, closing streets putting Dunedin backwards in years and make people suffer because that will make a huge difference to the world - yeah right, China is a big cause of why the environment is like it is. but you save your face Hawkins put up the front and make sure you sleep better at night because you hitch hike yep I'm piggy backing on the back of others to make me feel goooooooooodddddd about what you front. in my words it makes you false

Considering CO2 generators are used in the Dutch glass houses to promote plant growth it is not an issue to worry about. To let others drive him to his place of employment is passing the buck. If we ware going to be guided by this type of "wisdom " the future is not going to be rosy. Hopefully all this will come to a halt but I am not holding my breath.

To let others drive him is halving their (and his, if he had otherwise driven himself) carbon footprint.

"A thumb goes up, a car goes by
It's nearly 8 AM and here am I
Hitchin' a ride, hitchin' a ride
Gotta get me home by the mornin' light

I've got no fare to ride a train
I'm nearly drownin' in the pourin' rain
Hitchin' a ride, hitchin' a ride
Gotta get me home to my baby's side

Good to see new Mayor Hawkins ditching the old convention that important people have important cars. Time for the car as status symbol to go.

Good on the new Mayor. I do hope he isn't late for appointments or even normal day at work because he cant get there.
What this also sends an awesome message to DCC staff "if your late because you couldn't thumb a ride, no worries. If you miss the bus and decide not to take a car , "good on you".
If the mayor misses a flight to wherever because nobody would pick him up, again no problem , it's the cost of saving emissions.
it's great that we have great stands to follow.

I just checked the timetable of bus 14. OK 7:50am is too early but there's another bus at 8:10am, arrives at 8:41am by schedule in fact probably later because of morning traffic, seems good enough for 9am meeting? Why not use it yourself if that's what you want others to do?

Also why not cycling? I'm serious. Mr Hawkins said he'd love to but only after cycleway between Port chalmers and St Leonards is finished. Fair enough, indeed cycling with trucks on SH77 is no fun. But! All buses are equipped with bike racks, so how about catching bus at 7:50am or 8:10am depending on your level of fitness. Hang the bike, exit at St Leonards (8:05 or 8:25 respectively) and ride safely from there - the ride is long enough to kill time and have excercise. Then take a shower and you are nice and refreshed for 9am meeting.

He's literally the guy who gives up buying his own cigarettes but happy to bludge off others. Hypocritical. He should walk or buy an EV

"hitchhiking to work would go some way to offsetting those flights, by reducing his carbon footprint".
So he is happy for some other sod to offset his carbon foot print, that is not very green.