French tourists eating breakfast at Warrington Domain on Saturday (from left) Thomas Ledein (27) and Fanny Bomy (24), both of Lille, and Agathe Ledein (21), of Dunkirk. Photos: Gregor Richardson.
The days of Warrington residents stumbling across human waste in the dunes are long gone and locals say the Dunedin City Council’s freedom-camping policies are paying off.

Locals are saying the success of the policies at Warrington Domain and Ocean View Reserve show freedom campers and residents can live together in harmony and other councils in New Zealand should follow Dunedin’s example. 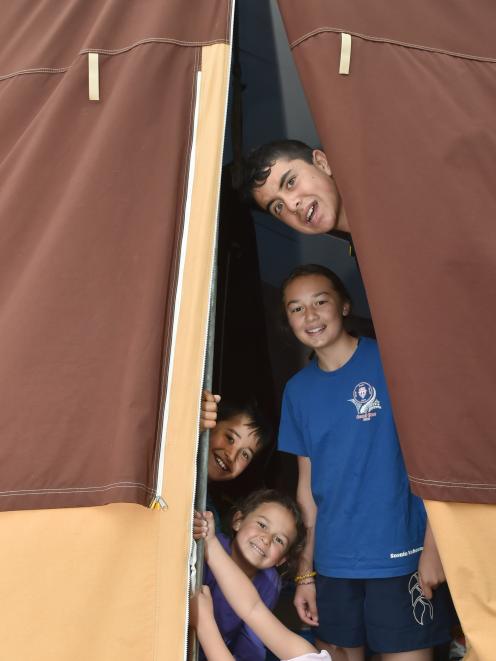 Camping at Warrington Reserve on Saturday are (from top) Tama Chapman (12), of Otematata, Jalizza Cockburn (12), of Dunedin, Italia Chapman (9), of Otematata, and Reo-Lena (6) and Rosalie Cockburn (4), both of Dunedin. Photo: Gregor Richardson.
This is a marked turnaround from last camping season, when some residents and a local runanga were calling for freedom camping to be banned at Warrington Domain amid concerns about human waste and rubbish being dumped in the dunes.

Warrington resident Ken McHoull said the council initiatives, which included upgrading toilet facilities and installing high-tech rubbish bins, meant such problems were a thing of the past.

He counted the number of freedom campers at the domain every morning and even on the busiest day this season, when there were 77 vehicles, there were no issues.

"The DCC has done magic at Warrington."

It showed that improving facilities was the way to go as  going down the  punitive route or banning freedom camping altogether did not work.

The naysayers who were last year calling for camping to be banned had been "pretty well shut up now because they have got nothing to moan about".

Waikouaiti Coast Community Board chairman Alasdair Morrison agreed the situation was much improved over last year.

There had been no complaints to the community board and the situation was "light years ahead" of the same time last year.

He was particularly impressed with the solar-powered bins installed by the council, which automatically compacted rubbish and emailed the contractor when they were close to full.

He still believed the council should open more areas to freedom camping, which would address the volume issue.

"If you are going to be inviting tens of thousands of visitors to your country, you have got to provide the facilities."

The facilities at Warrington  received  approval from users too when the Otago Daily Times visited on Saturday.

French tourist Thomas Ledein said he and his girlfriend, Fanny Bomy, and his sister Agathe Ledein picked up a camper van at Christchurch Airport and arrived at Warrington Reserve just after midnight on Friday.

Miss Ledein said the facilities were excellent, especially the clean toilets with soap.

Mr Ledein said he had been to many free camping sites in Australia and the reserve was better than all of them.

At the end of the reserve, two Otago families had  returned to camp in the same spot.

Zoana Cockburn, of Dunedin, said her family had camped at the reserve for the past five years.

The facilities at the reserve were better than ever, with the addition of portable toilets, more rubbish bins and water being supplied.

Moana Chapman, of Otematata, said it was the second consecutive year the family had camped at the reserve with the Cockburn family.The campers at the reserve were friendly and quiet.

"There’s no rowdy ones at all ... they’re all friendly; all the freedom campers come up and talk," Mrs Chapman said.

She said the reserve was the "perfect spot" to camp, with plenty of children’s activities, including clam harvesting at Doctors Point and swimming between the flags at Warrington Beach.

Saddle Hill Community Board chairman Scott Weatherall said the new initiatives were working at Ocean View and freedom campers had been better behaved this season, which he partly attributed to clearer signage installed by the council.

The reserve was at maximum capacity most nights, but campers were parking in a much more orderly fashion, he said.

The council was looking at  reviewing its freedom camping bylaw early this year and considering opening up other areas to freedom camping, Ms Paterson said.

Public consultation would be held before any changes were made.vaughan.elder@odt.co.nz

• The council has also stepped up communication with freedom-camping app makers and continues to fine rule-breaking campers.

Go Dunedin....Taken the lead and showed how its done....Great....Will stop there next time am down your way.....

Fantastic - if only the Tasman District Council would do the same - basic facilities - toilet, rubbish containment and a cold tap plus educational signs - are a no brainer. Great that you people have a council that listens!

This article is unbelievable. This year has seen a massive drop in visitor numbers compared to last year due to the Kaikoura earthquakes. The domain has far less people camping on it which is far more manageable. The person representing the Warrington community is Ken McHoull and his comments in no way represent the community as a whole. It seems to be just a big PR job showing the Council to be brilliant.
I have seen a man defecating in the bushes immediately adjoining the Blueskin Bay, people out raiding the now nearly non-existent paua, dogs fighting within the children's play area. The amenity has been degraded for both the local residents and the environment which was once there for the locals to enjoy is now packed with foreigners. Next season we will have the massive numbers back with no immediate onsite monitoring by the Dunedin City Council. Let's see if it's still called a success.