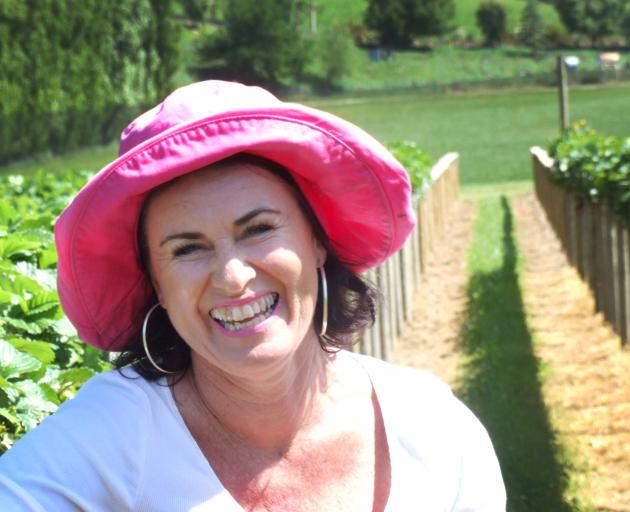 Leanne Matsinger, of Matsingers Berry Farm, in her recently developed hydroponic strawberry patch. PHOTO: SALLY RAE
A North Otago berry fruit business has grown to be the largest producer of strawberries in the South Island. Business and rural editor Sally Rae speaks to the remarkable driving force behind the operation.

If strawberry plants came in pink, then Leanne Matsinger would probably place a bulk order.

For the North Otago berryfruit grower is particularly fond of the hue and, when she bought a new tractor, she even asked if it was possible to get it in that colour.

Sadly it was not, and when she heads out at 2am with the floodlights blazing to go spraying in the still of the night, it is on a conventionally coloured workhorse.

Wind the clock back to 2010, and Mrs Matsinger did not know how to drive a tractor. Nor how to grow strawberries.

But following the sudden death of her husband Simon at the age of 45, she has grown the business in Peebles into the South Island's largest strawberry producer.

That was an unintended consequence, she said, as her sole focus had always been on doing the "right thing" for their three children.

Matsingers Berry Farm has been a North Otago institution since it was established in 1955 by her husband's father John and his brother Len, who had both migrated from Holland.

Her husband returned to the farm, near Papakaio, aged 24 and worked alongside his parents.

"He loved it - he loved growing strawberries and he loved his sheep. He loved everything about it," Mrs Matsinger recalled.

In June 2010, her family's world was turned upside down when her husband died suddenly at home.

Elder son Marcel and Mrs Matsinger pumped his heart 600 time while waiting for the ambulance to arrive, but to no avail.

Mr Matsinger had a condition called hypertrophic cardiomyopathy (HCM), in which a portion of the heart becomes thickened without any obvious cause, resulting in the heart being less able to pump blood effectively.

His doctor had advised him not to be a farmer, as it would be too hard on his heart, but he was passionate about farming. He also did not like people knowing he had HCM, nor did he like sympathy.

Mrs Matsinger said she asked him one day what what would happen to the family if something happened to him and he told her she could lease out the farms and they would be "fine".

But that was not entirely an option for her when she suddenly found herself a widow with three children and three properties - a 202ha dryland farm, a 94ha irrigated property and another 15ha block.

"I had to keep things very similar to what the children knew. They had the biggest thing taken away from them.

"If I stayed here, did what Simon did, this was their home, their hub, what they knew ... to grow strawberries. This was their life.

"I loved fashion and I still love lipstick but I knew I had to do the right thing for our children. I did it for my children. If I didn't have [them], I would have sold it all," she said.

Despite being grief-stricken, she "hit the ground running" - selling livestock and leasing out farmland while retaining the berry farm as she began to learn all the intricacies of running the operation.

Previously, that side had been left to her husband and parents-in-law, while she worked at a women's clothing store in Oamaru, a job she loved, and concentrated on motherhood.

In fact, she used to curse the summer strawberry season - the best time of the year to have holidays - "and we worked".

And while she used to be involved with packing and picking, "I was the clown - I used to throw fruit, lie in the patch," she recalled.

The day Mr Matsinger died, 50,000 strawberry plants arrived and needed to be planted, and the close-knit Papakaio community swung into action to get them in the ground.

She was profoundly grateful to the community, Mrs Matsinger said. Friend Joce Butler organised the local women to cook the family meals every night for six months, and the support had been ongoing.

Life changed dramatically. Following tractor driving lessons from Mrs Butler's husband Graham - "he has the patience of a saint" - she would climb out of the tractor to find the beds made and the washing folded.

She had to sit her chemical examinations so that she could buy spray and she quipped that the Novachem Agrichemical Manual became her Bible - "instead of reading Danielle Steel".

She had never previously been involved in the financial side of the business - "the power wasn't in my name" - and she had to get her head around that aspect.

But learning how to grow strawberries and run a business was not the most difficult part.

"The hardest thing was to actually get my head around that my children didn't have a father."

While she could have sold the farms, that never entered her head as she liked the hard work and the challenge, and wanted her children to have the same opportunity their father had.

There were doubters - "I remember a guy stopped me on the road two or three weeks after Simon died and said `oh well, you won't be doing the strawberries"'.

"It's lovely to achieve something people don't think you can do. My parents knew I could [but] a lot of people didn't think I could achieve it."

That support from her parents, Alister and Beverley Biggs, had been unwavering, while she was also very grateful for the continued support of Mr and Mrs Butler. Also long-time friend Ant Ford had provided financial advice, Allan Robins had helped with water issues, Howard Reilly did her fruit dispatching and she was extremely thankful to the wider local community too.

Mrs Matsinger has 120,000 strawberry plants and that includes the recent development of a 10,000-plant hydroponic operation.

That was something that excited her, as she believed it was "the way it's going to go", she said. It meant fewer staff were required to pick the fruit, which was a bonus given it was getting harder to get staff, and no weeding was required.

The initial set-up was costly - the system was also computerised for water and fertiliser inputs - and, again, there was much to learn, but it was also helping set the farm up for the next generation, she said.

Marcel is now a builder and a father, his brother Hann is working on a farm and sister Johanna is studying commerce at the University of Otago.

She was proud of her children's achievements, although sad her husband - who would have now been a grandfather - had missed out on "the best part of life".

She still loved growing fruit in the ground, and was also excited about a block of land previously leased out to which she had piped water. It been planted in strawberries for the first time, and she had "never seen so many".

She loved producing beautiful fruit and seeing people's reactions to it. She also loved working alongside her staff, who were mostly Filipinos and backpackers.

Like any form of farming, there was always work to be done and there was little down-time during the year.

Picking was from November until May, planting out started in June, then she started pruning the raspberry canes herself - then there was spraying and weeding.

She supplied MG Marketing and also continued to run a stall on farm, although that was not open all the time.

Last season was the best she had encountered - some weeks, the farm was producing four tonnes of strawberries and it was "just beautiful" fruit.

This season was shaping up to be another good one and while there was a hail storm several weeks ago, that had not caused any major problems.

It was not all pink roses; earlier this week, she notched up some bruises trying to put the power take off on the tractor.

Initially, she couldn't get it, so she had a cry - and then went inside for a coffee - and when she went back, she managed to do it.

"Life is what you make of it," she says with a smile.

Nothng like a good cry but good on her; She did not give up. All praise to those who supported her. Stay strong all of you.