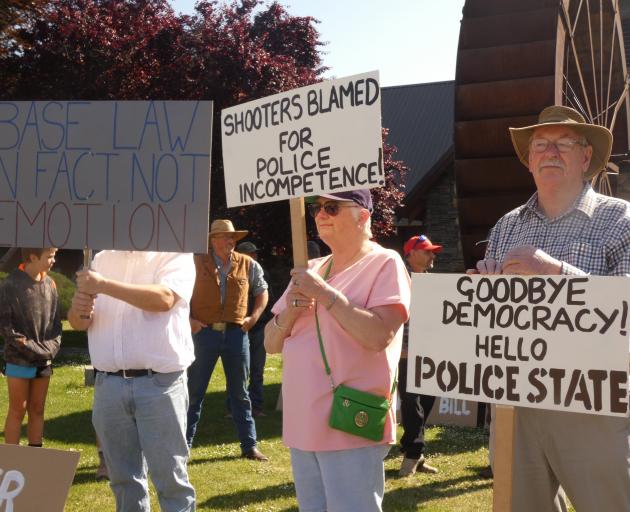 About 50 gathered at Pioneer Park along Centennial Ave carrying banners and placards.

Slogans included "U Stole My Sport, How Dare U" and "Shooters Blamed For Police Incompetence".

Demonstrators were urged not to wear camo-styled attire by organisers beforehand.

The Government implemented a ban on most military-style semi-automatic firearms and assault rifles in the aftermath of the March 15 Christchurch mosque shootings.

A second round of gun law reform has been proposed which would establish a national register and tighten the vetting process for firearms licence applications.

"The police vetting failed and they’re directly responsible for Tarrant [the mosque shooting accused] getting a licence."

He said he sympathised with the mosque shooting victims’ families.

"They were let down by the New Zealand police and the Government. We might be losing our sport, but they paid for it with their lives."

Another protester, who preferred to remain anonymous, said banning antique firearms which dated back 100 years as dangerous was absurd.

"It was all about semi-automatics, but it’s not.

"A lot of these guys had family in the first and second World Wars — these rifles have been sitting in a cupboard as collectors items for 50-100 years are all of a sudden dangerous."

Several motorists tooted their horns in support of the protest.

However, one motorist jeered at protesters, labelling the protesters as "a bunch of fools".

Other protests were held in Dunedin, Auckland, Christchurch and Ashburton.

Has the ODT made a mistake and put up the wrong picture here??

These men and women hardly look like the NRA funded, hardcore gun lobby that the likes of Gun Control NZ, Chris Carhill, Stuart Nash or or the MSM would have us believe.