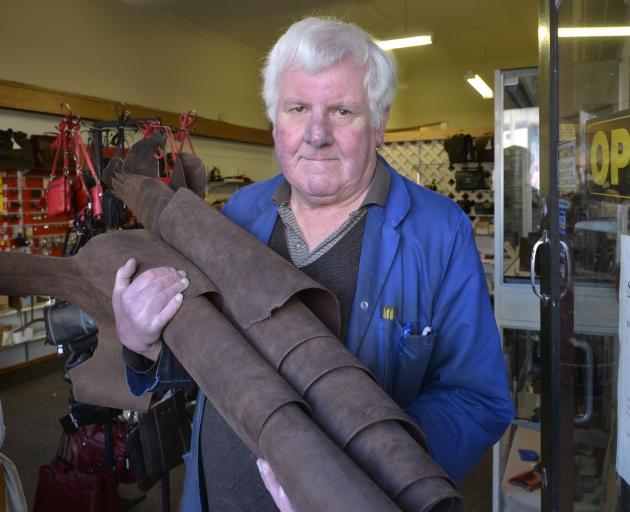 Drake Leather owner Bill Drake is preparing to shut up shop after 45 years in business.
They have housed brothels, restaurants, and retailers, but a row of high-profile central Dunedin buildings may soon be reduced to rubble.

For Drake Leather owner Bill Drake (67), the sale of the Chin family-owned Rattray St buildings, where his shop has been for more than a decade, means his retirement after 45 years in business.

The buildings have been sold to a consortium that would likely tear them down and redevelop the site for office space, he said.

He declined to say who the new owners were.

"It’s been a bit of a shock because I had intended on lasting until 50 years of business, then retire," he said.

Mr Drake said he was required to be out of the premises by the end of June.

He learned his trade making watch straps in Remuera, Auckland, in the early 1970s, before moving to Dunedin to attend university.

A short-lived and disliked career in marketing ended when he decided to open a leather store instead.

He started his business in 1975 and operated from several spaces around the city before settling in the Rattray St shop 13 years ago.

He planned to do some work from home, but he was also looking forward to a break.

"I enjoy what I do, but it’s time for a change ... I’ve spent 40 years standing up at a work bench, and to be perfectly honest I’ve lost the creative juices."

One of the owners, Sam Chin, said it was a shame to sell the buildings, which had been owned by three generations of the family.

"Someone offered us some money and we thought ‘well, we’re all near retirement age, we may as well get rid of it’."

Over the years, the building has housed businesses including brothel Club 166 and the Tai Ping Restaurant.

Mr Chin was unsure what the new owners had planned for the site.

ACC last year announced it wanted to construct a new office building in the city.

When asked about its plans, a spokesman said it was committed to securing a purpose-built building to house its Dunedin staff, about 650 people.

"Negotiations are continuing and we’ll make an announcement as soon as there’s significant progress."

It has been well documented those building facades have been crumbling for years.....one decent quake is all it would take!