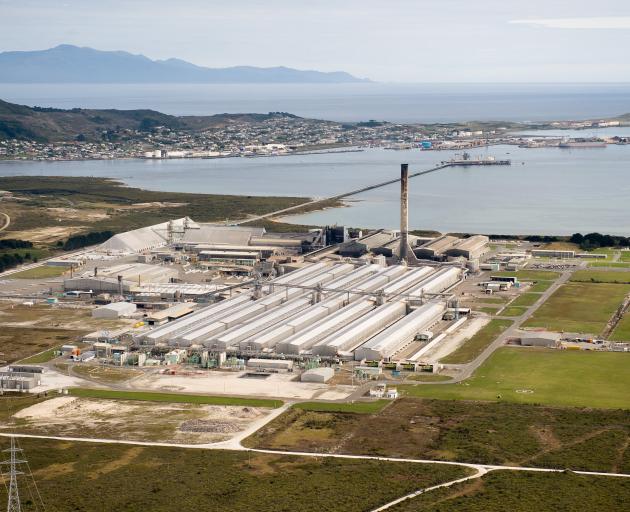 The aluminium smelter at Tiwai Point in Bluff. Photo: supplied
Southland does not need woolly promises of help and platitudinous pep talks. It needs a concrete plan to meet and then beat the economic and social destruction left when New Zealand Aluminium Smelters’ closes Tiwai Point.

This is not hyperbole. More than 1000 jobs will go when the smelter closes, and another 1200-plus jobs indirectly associated with the smelter will be rendered uncertain. Some of the most skilled and best paid positions in the region will be lost and thousands of workers and families, and untold businesses, will be hurt.

The looming costs are hinted at in the figures most often pitched as reasons to move heaven and earth to keep the smelter online. Previous estimates suggest it accounts for more than 6% of the region’s GDP, and well over $400million to the region’s economy.

That cash keeps people in work and businesses in profit. It helps people pay their mortgages and their grocery bills, helps them support local schools and pay their sports club subscriptions, and keeps them working in and contributing to the South.

These people, families and communities do not have long to consider the effect of losing the smelter. NZAS will terminate its electricity contract with Meridian Energy in August 2021, when the wind-down is complete.

They have little time to decide what to do next and an uncertain time in which to do it. They need no reminding we face a prolonged pandemic-induced recession, and that finding good work and a strong income may be difficult.

Of course, many looked to the future when closure was first mooted in 2011, and again in 2013, when the-then National-led Government gave the company a $30million sweetener after Rio Tinto put the smelter on a list of underperforming sites marked for sale.

That money was supposed to be used to future proof the operation. The company was told the Government — and now, the current Government — would not dig into its pockets again.

The future loomed large last year when Rio Tinto started a ‘‘strategic review’’ of the smelter’s operation and how it stacked up against its costs and the ever-fluctuatingvalue of the product it released to the volatile international market.

It also made it clear it was still paying too much for its electricity, and that plenty hinged on the Electricity Authority’s decade-long transmission pricing review. When the review concluded in June, the $11million saved from NZAS’s $50million to $70million transmission bill was, as expected, called too little, too late.

It has always been clear energy costs would not be an issue if global aluminium markets were stronger, and that such cost will almost always be a bargaining chip as long as the company used such a significant proportion — about 12% — of domestic electricity supply.

It has also been clear successive Governments would not intervene to the extent Rio Tinto wanted. Without this, it has been clear the smelter will, eventually, close.

There is little time to prepare for a post-smelter future but successive Governments have had the best part of a decade to ensure there was a plan to cope with, and then fill the gap left when Rio Tinto pulled the plug on its regionally and nationally significant operation at Tiwai Point.

Treasury, Ministry of Business, Innovation and Employment and Ministry of Social Development officials have had plenty of time, regardless of which parties were in Government, to forge all manner of strategies for a post-smelter future. They, and a succession of politicians, have had years to prepare for the inevitable.

As such, Southlanders have every right to expect Prime Minister Jacinda Ardern and Finance Minister Grant Robertson to outline robust, detailed plans when they take up Labour Invercargill List MP Liz Craig’s invitation to visit Invercargill and ‘‘discuss how the Government might help us support those affected, grow local jobs and create a sustainable future for the Southland economy’’.

They can point to work that has already started in aquaculture and agriculture, but the community leaders now galvanising to fight the closure will hope they will also revive the work that should have been done months, or years, before NZAS yesterday confirmed the small window of opportunity to secure the smelter was all but closed.

If not, Southlanders have every right to feel let down by a multi-national company and by the governments that saw this coming.

The first thing that needs to be made clear is that the power WILL BE used locally and not shipped off to the North Island.
12% of the countries power supply is a lot. Meridian has just lost it's biggest customer and their share price is diving. They are 51% government owned and a renewable energy supplier which does bode well for further renewable energy developments. To believe government didn't have a hand in the pushing for the closure would be naive.
There will be a fully serviced industrial site vacant at Tiwai, complete with port and power no one else can access without major investment so here is a thought bubble.
Japan is a driver of the hydrogen fueled economy technologies. Let's have a chat with them.
Rubbish disposal and so called recycling is a bad joke in NZ.
How about dropping all of it into a plasma furnace at Tiwai, generating more power, then making hydrogen for local and export consumption.
The buildings that are there could be repurposed, the concrete pads and wharf modified and the power utilised locally, for Southland and the countries benefit.
Hair brain idea you say. Maybe, but I'm willing to bet no government official as anything better.