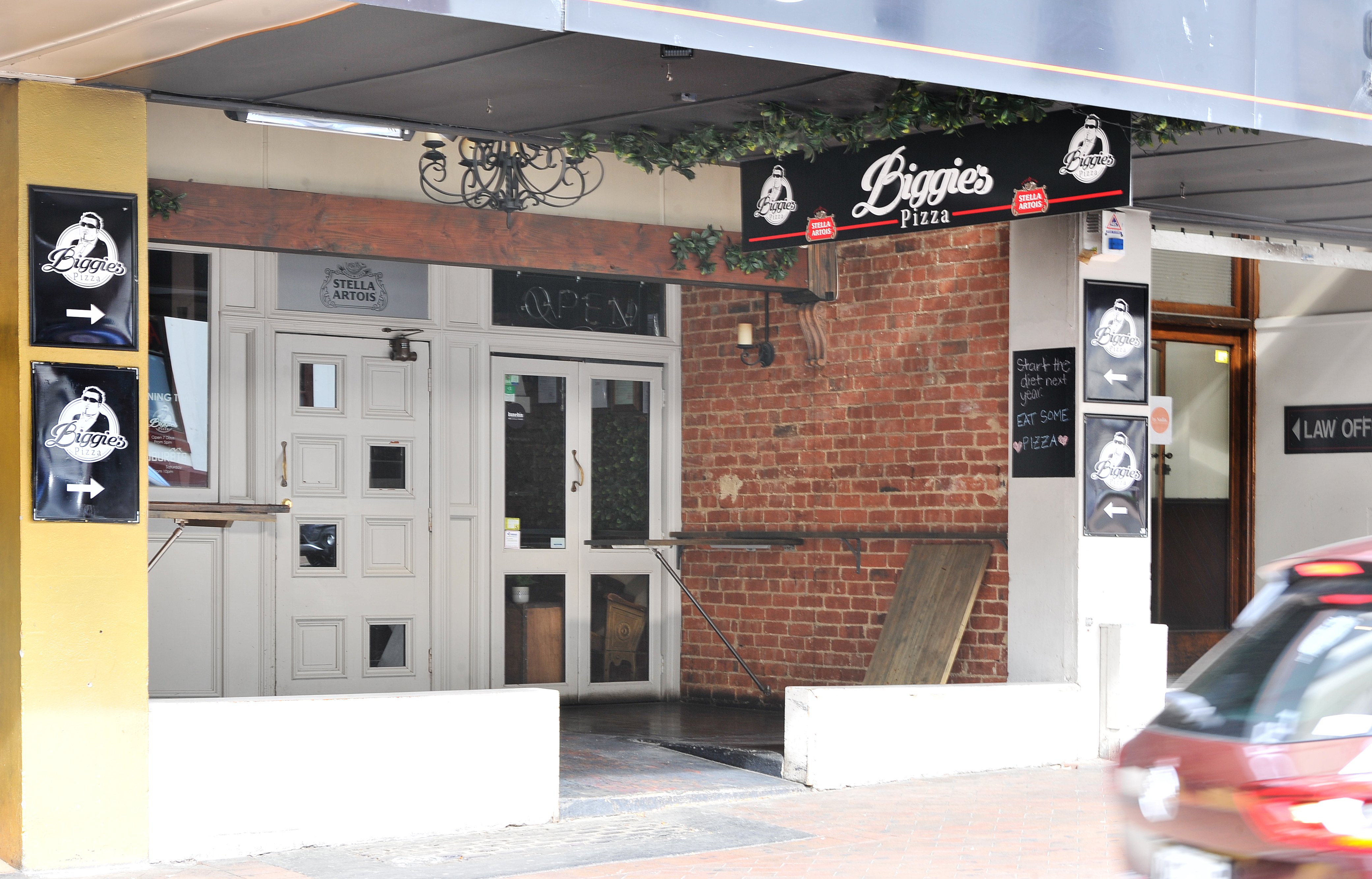 Biggie’s Pizza in Stuart St, Dunedin. PHOTO: CHRISTINE O'CONNOR
A Dunedin pizza restaurant is being bombarded with "fake reviews" and negative comments after turning away an Auckland couple over Covid fears.

A couple on a South Island road trip say they were not allowed inside Biggie's Pizza for a drink once they revealed they came from Auckland, despite having left the region more than two weeks ago.

The disgruntled would-be diner and her partner were left shocked and angry by the blanket refusal, saying they had no links to any Covid cases and did not pose a health risk.

But the Stuart St eatery is making no apologies for its hardline stance banning the patrons, saying it has the right to turn away customers to protect staff and the business.

Restaurant owner Tacey Millard said there was no blanket ban on people from Auckland.

Staff would ask patrons questions about things like their recent travel history and symptoms.

Depending on their answers, and their attitude, a decision would be made about whether to let them into the premises, she said.

The couple in question were unhappy about being asked questions, and the restaurant manager decided not to let them in.

Since news of the issue broke, the restaurant had been receiving fake reviews and negative comments online, she said.

As long as businesses did not discriminate against people for reasons such as race or age, they could choose whom they allowed on their premises, she said.

During the current Alert Level 2 it was a matter of taking "extreme precautions" in case a person with links to Auckland, where community transmission was ongoing, should bring Covid into their premises.

The 27-year-old woman, who had been in the South Island since the start of the month, said she was stunned when staff quizzed her about recent travel.

Questions included whether the couple had been to Auckland.

"We said, ‘Yes’. They asked us when was the last time we had been there and we told them September 1."

At that point, they were refused entry.

The couple had not been unwell during their southern holiday.

The woman, who did not want to be identified, said they could not believe they were being subjected to this level of discrimination.

"We have been road-tripping around the South Island, trying to support local businesses, and they have all been very welcoming aside from this bar.

"We were so shocked and angry that we were treated this way and it's not good enough," she said.

But Ms Millard said the ban was about protecting people in the middle of a pandemic.

"We are taking extreme precautions and have the right to turn people away from the business in these situations," she replied on Facebook to the disgruntled Aucklander.

"If you were in fact to have the virus, it could put us out of business entirely, which is detrimental for a small business like ours."

If the restaurant has the right to refuse service then those refused and others who find that refusal offensive have an equal right to comment on it. The best place to comment being the restaurants own review page. If they want to strongly defend their policy then they should have the fortitude to accept criticism of it.

You must have a different understanding of "review" to me. If I were to "review" a business then I must have already used that business. I must also be giving my thoughts on how I found my interaction with the business.

Basically, unless it relates to my own interaction with the business then I don't think it has any place in a "review" of the business. Bandwagons are not reviews.

Live by the sword, die by the sword. If they're going to behave in an intolerant and divisive manner, then they can expect that behaviour to be reciprocated towards them.

It's attack and threat, the great kiwi Nasty, not 'criticism'. Interesting that locals are anti business in their indignation.