Serious concerns about a slew of proposed speed limit changes in Dunedin have been expressed by the Otago Peninsula Community Board.

The Dunedin City Council is proposing an amendment to its speed limits bylaw, setting new limits for some roads under its control and intending to bring them into force on November 1.

Otago Peninsula Community Board chairman Paul Pope said the proposed bylaw "tried to implement a blanket approach to road safety that is not in tune with changes in our roads or community needs".

Changes to the bylaw propose all settlements along the peninsula, including Macandrew Bay, Broad Bay and Portobello, have speed limits reduced from 50kmh to 40kmh.

Other roads on the peninsula, including Portobello Rd, would have speed limits cut to 60kmh.

The council says it is addressing a citywide issue of poor road safety statistics and people needlessly dying. 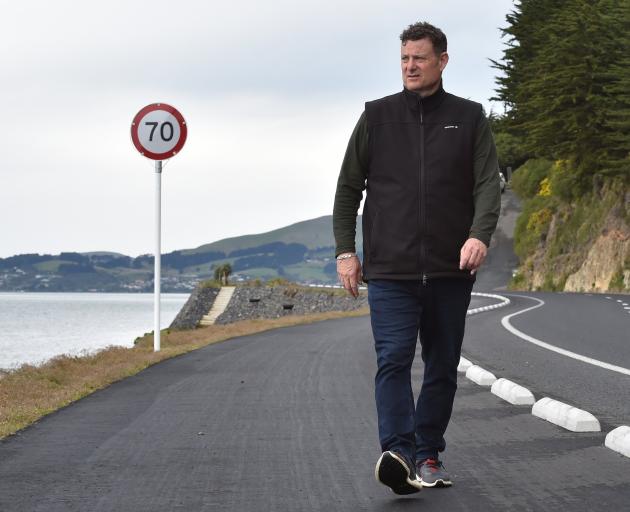 Otago Peninsula Community Board chairman Paul Pope says the community does not want speed limits in the area reduced. PHOTO: GREGOR RICHARDSON
Mr Pope said the board conducted an online survey of community members when the changes were first suggested, attracting 450 responses.

The number of crashes and vehicles going into the harbour had dropped noticeably since various safety improvements were implemented, such as road widening, and further safety measures were unnecessary.

"Most of the people out here are commuters and are worried there would be a noticeable effect on their commute times."

More than 58% of those surveyed disagreed with cutting the speed limit to 40kmh on the main streets of the peninsula, and more than 73% disagreed the limit on all other roads be reduced to 60kmh.

"These changes are unenforceable and confusing ... That is particularly worrying given our reliance on foreign and out-of-town visitors to our area," Mr Pope said.

The speed limits should remain as they were instead of introducing a "blanket" approach to speed and other safety improvements, such as pedestrian crossings, would be of more benefit, he said.

The Saddle Hill Community Board also expressed some worry over the proposed bylaw.

A submission on the bylaw from board members Leanne Stenhouse and Keith McFadyen said reducing the speed limit between Green Island and Brighton from 80kmh to 60kmh would be "a step too far" and would have the opposite effect of what was intended, leading to frustration for residents and more overtaking.

A council spokesman said between 2015 and last year, 28 people were killed in crashes and 369 were seriously injured on Dunedin roads.

"These numbers are getting worse and speed is a key contributing factor, which can be addressed as part of this speed limit review process."

Since submissions had closed, it was not appropriate for staff to respond to individual submissions while the process was ongoing, he said.

Public hearings on the bylaw will be held on October 28 and 29.

The Council is right, the Bay road has for many years been the place to drive if you want to see appalling tailgating, overtaking or road rage. I don't know whether or not Pope has any kids, but driving Mum and Dad's car into the harbour used to be a rite of passage. If you're lucky, they're not injured or killed. The new changes to that road are stunning and its time to make the road safer and dropping the speed limit is the most effective way of doing that. He seems to think road safety is a democratic decision, which is silly and implies he's not up to a leadership role like this.

Paul Pope is quite right and represents many living on the peninsula. 70kph is a reasonable speed (it used to be 100) and 50 through the townships.The sort of behaviour you describe has little to do with the speed limit, more with typical poor Dunedin driving. DCC has never published the data they have used because it is basically flawed. How many accidents have occurred on Portobello Rd under the 70kph limit? How many in the townships? Not many. It is also noticeable that when we have had cars in the harbour it has almost always been locals, not tourists.

As a peninsula resident I can confirm that local feeling would be against the proposed limits, there is no call for these changes from either vehicular or pedestrian road users. The impact on commuters, who have shown remarkable patience during the road improvement works, would be detrimental and unnecessary.

You are aware that if they reduced the speed limit to 60kph and 40kph you are only adding about 2 minutes if you drive all the way from portobello? The increase in commuting time is pretty negligible.

longer if you are tailgating a campervan at 20Kph

The average commuter would drive to the present speed limit but the new limits would be hard to enforce and possibly lead to bad overtaking decisions from otherwise law abiding drivers. So, detrimental and unnecessary.

These speed limit changes are simply another attack on the use of cars by DCC. No real reason, no study on potential impact, just slow everything down and try to discourage car use.
Except that there is no alternative to car use for most residents on the peninsula. Very poor planning and just typical of DCC.

Can they actually approach speed limits on case by case basis backed up by actual statistics for individual roads? Council wants to put everyone under the blow and impose harsher speed limits on every current 70kmh+ road including those that perform well without incidents.
Sorry but I don't buy it as good intentions, seems more like same old DCC crusade against motor vehicles, like unwarranted removal of all parking in central city etc. Now Peninsula is the next victim: "we've built you the cycleway so use it or drive at snail's pace", right?

There is obviously an anti-car movement within DCC. Let's scrap as many car parks as we can, cause chaos in the city centre by stuffing up the traffic lights, paint silly dots on the road to confuse everyone and now reduce the speed limits without any evidence it is going to have any effect whatsoever. DCC needs a good clear out of staff in the transport dept and a mayor who values Dunedin.

Lots of replies keen on speed and cars ruling the road like they have for the last 50+ years. Contrary to some statements above, there is evidence reducing speed reduces injuries and death. 80kmh on a shared road is lethal for non-motorised users. 60kmh is a little better. 30kmh is the recognised ideal internationally.

Does any one actually travel these roads at 80k? Most are narrow, windy and hilly. Many are gravel. Anyone who maintains 80kmph is driving incredibly dangerously.
Sure, you can hit 80 at points, only to have to break in the next minute for the upcoming corner. But let's say you can maintain 80k. Then driving form Taiaroa Heads into town - about 30k - will take 22mins. At 60k - 30 minutes. An 8-minute difference. In reality, even less, as maintaining 80K the entire length of the peninsular is not possible.

Last point: if 40kmh in town and 60kmh outside is confusing and unenforceable, then I'd hate to see how Mr Pope handles the roads in the city!