By Emma Perry and Hamish MacLean and Daisy Hudson
6 Comments

A fire at Lake Ohau ripped through about 1608ha after beginning yesterday morning, and is still being fought today.

The blaze was tracking south into grassy farmland and Department of Conservation land yesterday afternoon.

Five weeks ago, a fire near Lake Pukaki, near Twizel, burned through more than 3500ha of land - much of it wilding pines - on August 30.

Mr Smith has joined a growing chorus of voices calling for better management of Doc land to prevent such blazes from burning out of control in future.

He said he would be raising the issue with the Minister of Conservation, Eugenie Sage.

"It is a huge risk to neighbouring properties to have areas of land with that much vegetation and fuel for fires. I would like to see better management practises."

Ms Sage today visited Lake Ohau village and said she remained focused on the losses people faced in the immediate aftermath of the fire.

However, she said there would be a need for a conversation about ‘‘land management in the bigger picture’’ in future.

The current Government had put $100 million over four years into controlling wilding conifers, Ms Sage said, and on conservation land these had been substantially reduced.

‘‘Federated Farmers, I think, was making a push for free grazing," she said. "Nature doesn’t start fires except by occasional lightning strikes, it’s managing human activity that is the key."

North Otago Federated Farmers high country chairman Simon Williamson, a farm owner between Omarama and Twizel, said he had been woken by news of the Lake Ohau fire after 3am yesterday.

"My neighbour across the road was evacuated ... we were very apprehensive." 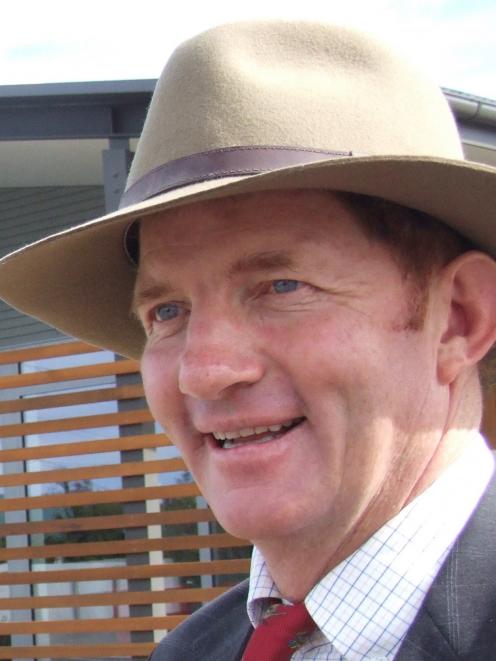 Simon Williamson. Photo: ODT files
Mr Williamson said the retired land the fire was spreading through was a "huge risk" that had not been addressed.

"All this ground that’s been locked up and hasn’t been grazed is becoming a hazard to life. The fuel loading in the land is just huge."

Mr Williamson said having two fires in the past month highlighted the dangers of retired land and wilding pines.

"People are saying they want to lock everything up and create a safe habitat, but you’re not locking it up when it’s not being grazed or managed ... you get one spark and it spreads and burns everything in sight."

Mr Williamson said he heard of three or four farms that had lost livestock or had to move it.

"It’s really disappointing. We’ve been warning of this for a long time ... once upon a time it was all grazing land.

"There’s a mindset that grazing is bad and it kills wildlife, but the reality is these massive blazes are going to happen more and more and spread further and further."

"The fire season is certainly getting earlier.

"These are not spring temperatures, these are summer temperatures ... in Queenstown today it was eight degrees above average."

Farmers seem to hate conservation land. There have been so many fires this year, and two recent ones around the Middlemarch conservation estate. Nobody seems ever accountable. What is different now that these fires are occurring in such back block areas?

It is such naive, short-sighted, greedy and over-simplified thinking to assume that introduced grazing animals are the solution. When it is these non-native animals which made the whole mess in the first place! Returning the land to its natural biodiverse ecosystem is not only the key for the district but for the world.

Attempting to link fires known to be caused by human negligence (poorly timed burn-offs and a power cable maintenance issue) or stupidity (the cooking stove incident at Pukaki) on "climate change" was expected - but isn't helpful, and a climate scientist should know better than to make the statement "These are not spring temperatures" following a 23.5C day in October (a week after Queenstown's snowy Sept 28 with a 5.1C max).
This season very typically bounces between near summer and winter conditions with hard frosts, snow, and bursts of warmth all part of the expected mix. Extreme wind events are also very typical of Spring and a good reason to expand the total fire ban period through this season.
Whatever the long-term trends of climate may prove to be, the clearest fact at this time is fires go where people go, so as areas like Mackenzie Basin become more populated the fire risk will increase and we must be better prepared to deal with that.

Wilding pines and no grazing due to climate change. Yeah, right. Mismanagement by DOC and greenies? Yep. Give the bill for all the damage to DOC.

This claim is obviously overegged. However climate change induced fires is factor that should be taken into account when we plan things like planting one billion trees.