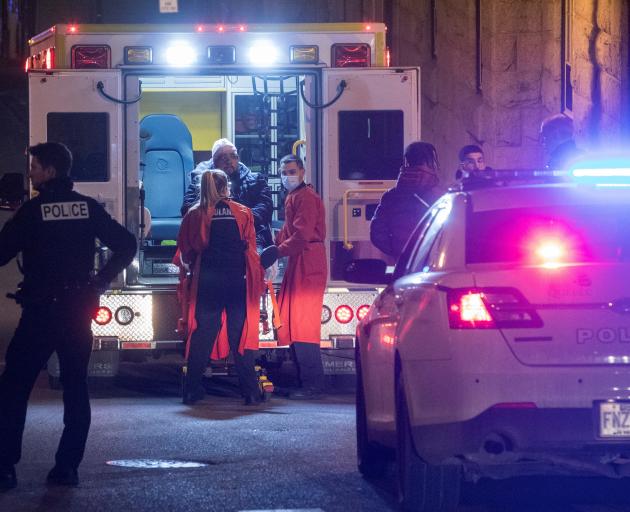 A person is treated by an ambulance crew in an area where multiple people were stabbed in Quebec City. Photo: Reuters
Two people were killed and five wounded after being stabbed by a man dressed in medieval clothes and wielding a sword, Quebec police said on Sunday, noting the attack appeared to be driven by personal motives and not linked to any terror group.

"Dressed in medieval costume and armed with a Japanese sword, everything leads us to believe he chose his victims at random," Pigeon said, adding that preliminary information indicated the man was not affiliated with any terror group.

The incident began late Saturday night, on Halloween, inside the city's famed walled centre. Police told nearby residents to stay indoors and made an arrest after a three-hour manhunt.

"It is once again, and we believe, an isolated act," Quebec City Mayor Regis Labeaume told reporters. "We need to have a societal debate on the subject (of mental health) because it is becoming more and more difficult to manage."

In 2017, a Canadian man gunned down six members of a Quebec City mosque and was later sentenced to life in prison.

Quebec's police chief said on Sunday that the suspect had spoken of conducting an attack "in a medical context" five years ago but was not known to police and did not have a criminal record.