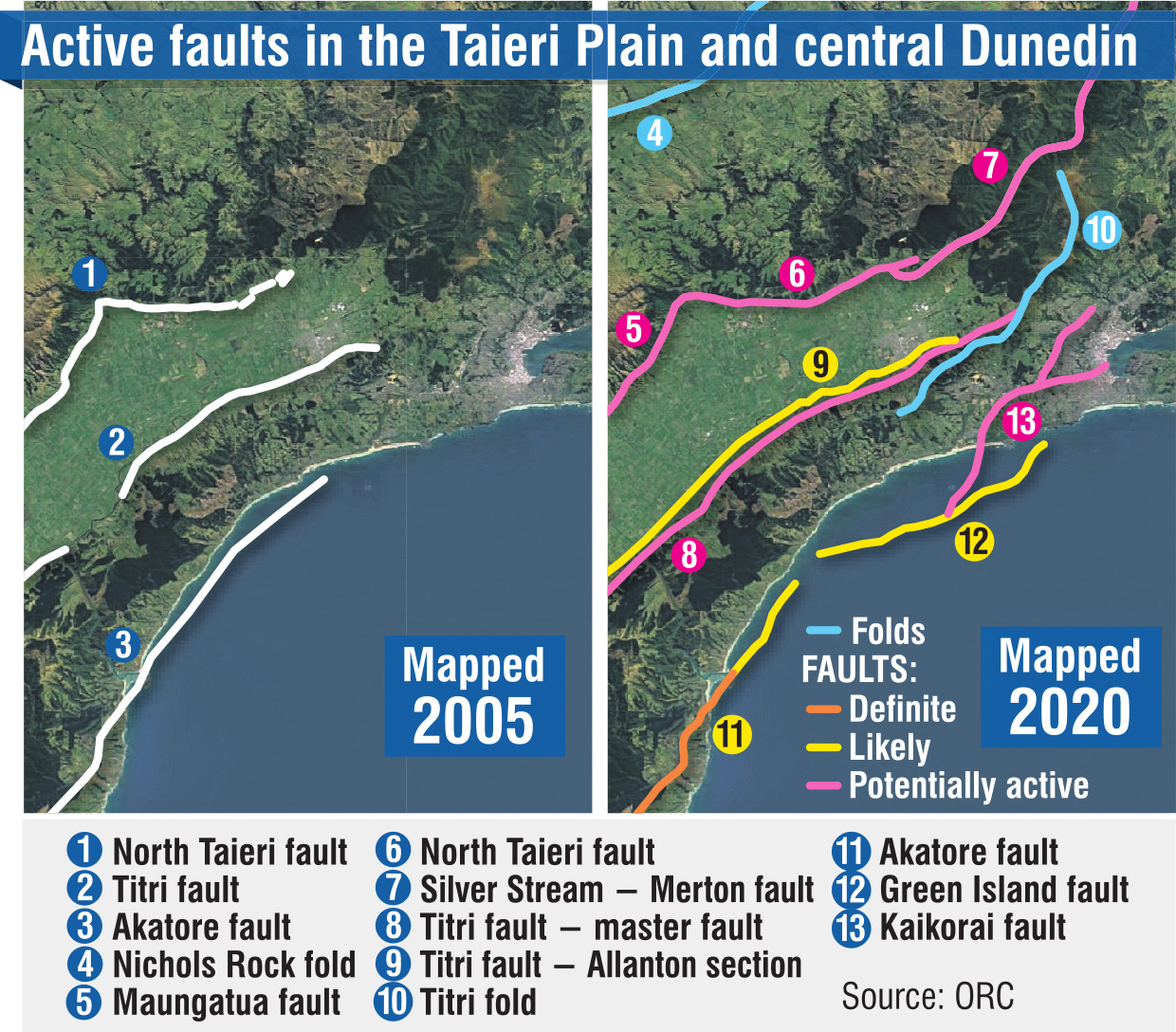 Several newly mapped or classified fault lines run through Dunedin — but the city remains among the places with the lowest risk for earthquakes in New Zealand, the Otago Regional Council says.

Among them, nine were "definite" or "likely" active faults, another three were "possible", and a further 14 were "potentially" active.

Only two, the Akatore and Settlement faults, were assessed as having an average return period of less than 10,000 years.

"Nonetheless, there are several undoubtedly active faults in the Clutha and Dunedin city districts, notably the Akatore fault, Blue Mountain fault, Hyde fault, Settlement fault and Titri fault, and [there is] every reason for authorities and residents to be prepared for the occurrence of ground-surface-rupturing fault movements, and resulting large, locally damaging earthquakes, over future decades to centuries," Mr Barrell said.

Still, no large, ground-rupturing earthquakes had been centred in Clutha or Dunedin since European settlement in the mid-1800s, Mr Barrell said.

Most earthquakes felt by people in Otago after that were centred outside the region.

They typically originated in the Fiordland area near or on the plate boundary, he said.

The 5-magnitude earthquake that shook Dunedin on April 9, 1974, was the largest reported in Dunedin or Clutha since European settlement.

The epicentre of that shake was determined to be offshore, about 10km south of central Dunedin and about 20km deep.

There was damage to masonry, though, particularly chimneys

Further, the Canterbury earthquakes of 2010 and 2011 occurred on a series of previously unknown faults.

The 2016 Kaikoura earthquake involved the rupture of multiple faults, several of which were not previously known to be active faults, Mr Barrell said.

It was conceivable that there still were unknown faults in this region as well, he said.

But it did not raise significant new concerns for Dunedin or the Clutha district, she said.

It was not intended for use in property-specific risk assessment or hazard zoning.

The newly mapped Kaikorai fault, believed to run in part along the Caversham Valley into South Dunedin, likely presented a minimal risk, she said.

The Green Island fault, which runs offshore from South Dunedin, was also among the handful of new faults identified in Mr Barrell’s work, her report to the council said.

Research into faults beneath Dunedin and Otago Harbour was ongoing, she said.

Faults in Queenstown Lakes and Central Otago were assessed in 2019 by GNS Science.

Faults in Waitaki were assessed with Environment Canterbury in a 2016 study.

The council would now discuss the next steps for reducing risk from seismic hazard with Otago’s city and district councils, Dr Hornblow said.

CD could advise what 'preparation' should be made.

"Several newly mapped or classified fault lines run through Dunedin — but the city remains among the places with the lowest risk for earthquakes in New Zealand, the Otago Regional Council says" that's what they tell us, I wouldn't trust them with with a 10 foot pole.