By Grant Miller
11 Comments
A Mosgiel couple hoping to start a family have had to put their lives on hold in the face of costly bills to fix work on their section.

Himanshu Dua and Renu Anand bought a section in the Gladstone Heights subdivision and built their house there, but problems with a watercourse retaining wall at the property could cost them between $30,000 and $100,000 to fix, or a fine of up to $200,000 if they do not.

The couple said, either way, they did not have the money.

They put off having a baby because of how stressful the situation had become.

Mr Dua said he had had sleepless nights and was prescribed sleeping pills by his doctor. 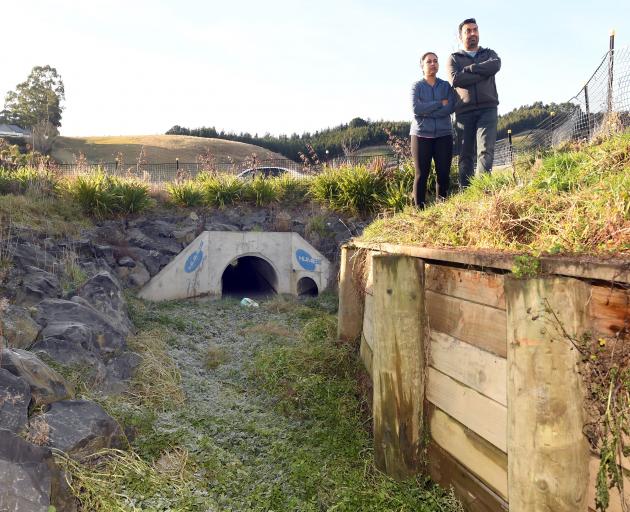 An unconsented wooden retaining wall is causing a financial headache for Mosgiel homeowners Himanshu Dua and Renu Anand. PHOTO: STEPHEN JAQUIERY
Mrs Anand said that, whatever feelings a couple were meant to have about buying their first home, they had not been able to bask in them.

They had no idea there was a problem until a landscape gardener pointed out the wooden retaining wall near the house was bending.

A structural engineer has since concluded the wall is substandard, the poles have less than 30% of the strength required by the building code and the work was substantially different from what was consented.

The Dunedin City Council has said the situation is a civil matter between the landowner and the developer.

The developer was Gladstone Heights Ltd, owned by members of the Logan family. Representative Rennie Logan said it was a matter for the landowner and the city council.

Mr Logan pointed out the developer obtained a code compliance certificate from the council for the culvert there.

A council spokesman said the retaining wall was constructed without a building consent and was "therefore not signed off by the Dunedin City Council’’.

The council clarified that the wall was built after a code compliance certificate had been issued for the culvert.

Mr Logan said the landowner created a problem by raising the site behind the "landscape wall’’ when building the house, turning it into a retaining wall.

In a letter last year, the council rejected the notion of a landscaping wall and said the wall required a building consent.

The couple said they were reluctant to cast blame around, but struggled to see how they were at fault.

Mr Dua met Mrs Anand in 2004. They married in 2013 and Mrs Anand moved from India to be with her husband.

They had been renting in Waverley, Dunedin, when they saw the Irwin Logan Dr section in September 2018 and decided to buy it.

They arranged for GJ Gardner Homes to build their house and moved in during October 2019.

Despite their ordeal, Mrs Anand said she loved living in Mosgiel.

However, the council spokesman said yesterday once Mr Dua and Mrs Anand acquired the property, "the new owners also took on the responsibility for the wall’’.

Structural engineering consultant Hanlon and Partners said the council was required to inspect the infrastructure by late August in 2019, but there was no record of it having done so.

The watercourse could not carry the flow of water the approved design had allowed for, the firm said.

Mr Dua said a timber wall was inconsistent with what had been consented.

Asked if he had a message for the couple, Mr Logan said the landowner should have sorted out landscaping and fencing requirements before building.

The Anands should take a case against the developer to the Disputes Tribunal.
Hard to believe that the council would not pay more attention to a wall beside a creek though.
The developer has made a lot of money from this subdivision, I would have thought fixing this free of charge would be good public relations.

Come on you greedy developer, do the right thing. Use a bit of the profits made from these land sales and fix the problem you created.

As council have issued code of compliance, shouldn’t that make council liable for anything that isn’t up to standard, this happens all too often through council inadequacy.
Builders and homeowners are put through the wringer paying for and waiting for inspections to get various stages signed off by council, and here the council clam up when they are at fault which isn’t right.

Their place has probably gone up 100k in a year just mortgage against it for 100k and get it fixed, not worth stressing about and putting your life on hold for

Your logic is flawed, in that asset value doesn't generate cash to fix an unexpected problem.

This is sounding familiar. The developer has made their money and is passing the buck, the DCC has issued its compliance notice and is passing the buck, and now the people LEAST resourced to deal with the problem are being threatened with fines because neither the developer nor the DCC did their jobs properly. A master class in arse covering. Again.

Get Fair Go on the case!!
Developer should have read specs and council should not have signed this off at inspection - both parties are at fault!! Cost should not fall on property owner for fixing the fault.

Looks like someone is telling porkies. Was the work signed off by DCC or not? Should be easy to check and the developer should have proof. If not then the developer is surely liable. Either way DCC is completely wrong to say it is between the householder and the developer. Any good lawyers out there willing to take this up for the couple?

I am surprised this wall wasn't picked up by the DCC when this home was being built, does this house have code of completion?

It's money, money and more money ... banks make record profits, developers liine their pockets and the DCC bury their head in the sand and tell the person it's their fault .... or anyone's fault but theirs !!

We’ve just heard of another similar situation in an Outram development. The section owner has had building plans put on hold because there is issues with consent of landfill. These developers need to be held to account and the council needs to do its job not leave it to unsuspecting section buyers who believe they are protected by the District Plan and building code rules. Developers need to be held to account for at least a decade or two after the sale of sections, otherwise we see this duck shoving between the DCC and developers with home owners held to ransom.