Jamie Siggleko was jailed for six years for assaulting a police officer, but time in prison sparked a change, when he discovered he could use hair clippers to gain respect, as he tells business editor Sally Rae.

Jamie Siggleko had more than a close shave with the law.

Jailed for six years for assaulting a police officer, it was his incarceration that was a catalyst for change.

From using violence to gain what he saw as respect, he learned that he could use hair clippers to gain respect, in a much more positive way.

Mr Siggleko (33) candidly admitted he ‘‘got into a bit of trouble’’ a decade ago. Prison forced him to reflect on his violent offending and the realisation it likely stemmed from a troubled upbringing which was ‘‘clouded by a lot of other things’’.

His mother died when he was 10 and she was never spoken about in a family where there was  a history of mental illness.

He got into a lot of trouble when he was a boy. He was living with his grandmother but she was unable to discipline him.

She sent him to live with his father in Auckland whose new partner was Samoan. Being a Maori boy amid a Samoan culture did not mix well, he said.

The only drive was to get on the benefit and, as soon as he turned 16, he achieved that goal. From there, he was living week-to-week, a lifestyle which was all he knew.

"I think I just had a massive chip on my shoulder,’’ he said.

Mr Siggleko served three years and eight months of his six-year sentence, including 18 months in a high security unit. 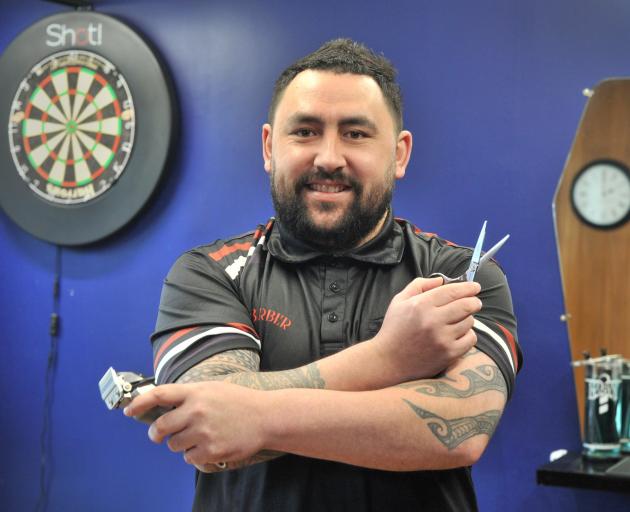 Prison was something  that ‘‘rendered you powerless’’ and it gave him plenty of time to reflect on what had led him there.

‘‘Violence was a problem. I just had this thing about getting respect ... I didn’t go out and purposely cause violence on people [but] if there was an opportunity to, I would. It was a sense of feeling respect,’’ he said.

Prior to prison, he had ‘‘secluded’’ himself; he had no friends or support circle and no hobbies — ‘‘my hobby was to probably get on the piss’’ — and his sole focus was his children.

‘‘There was no ambition; the ambition was to maybe win Lotto. Life was very empty when I look at it [now].’’ He appeared before the Parole Board three times but was unable to be released as he had no address or family to go to.

While in prison, Mr Siggleko started cutting hair with the unit clippers. It was something he had never done before but it was a good place to practice as the inmates gave each other haircuts.

Soon he was being asked to give haircuts and the feeling of being respected was ‘‘really cool’’ and something he had never felt.

In August 2015, Mr Siggleko was released from the Otago Corrections Facility, near Milton, something he described as ‘‘no feeling like it’’.

‘‘It’s like walking into a casino, putting in $2 and winning the jackpot.’’

Despite it being winter, he went to the beach for a swim, and then to the pub and ordered a jug of cola — ‘‘because I hadn’t had fizzy for a long time’’ — and decided he was going to walk into the first barbership he could find.

While in prison, he did some engineering units, which kept him occupied, and he had a job at Toko Trailers in Milton.

After his release, he worked there for about a month, car pooling four days a week to Milton.  The other day, he would go into a barbershop in Dunedin and sit and watch.

Occasionally, he would be allowed to cut hair if a customer was prepared to give him a go, and it was really busy.

One morning smoko, he asked the boss at Toko Trailers how much notice was required as he had decided he wanted to be a barber.

Told that he did not have to give notice, he thanked his boss for the opportunity and left.

‘‘I always hear about people saying, ‘you’ve got to do what you enjoy’. You think you’re doing what you enjoy but you’re not until you really find it,’’ he said.

He would pick up the odd hair cutting job — some days only two $10 cuts — but it was enough to get something to eat.

He later got employed in the industry and — apart from a three-month stint working at a pet food factory to clear his head — he remained there, opening his own business Jamie’s Barber Shop from his Brockville home in February this year.

For the past three and a-half years, he had combined cutting hair with working as a support worker at Moana House, a residential therapeutic community for adult male offenders who want to change their lives.

That stemmed from an approach from a staff member whose hair he cut. Mr Siggleko admitted he was ‘‘really nervous’’ about sharing his background but he eventually agreed to drop his curriculum vitae in. Within 30 minutes, he had his first interview.

Three months after his release from prison, Mr Siggleko met his current partner. Two years ago, he was awarded full custody of his children from the earlier relationship.

That meant he had to halt his study for addiction counselling and his business provided flexibility for family life, with his five children ranging in age from six months to 15.

Life today was ‘‘full’’, but not yet completed.

‘‘It’s a lot more fulfilled. I’ve got my family back, I’ve got my social circle,’’ the competitive darts player said.

Another part of his development had been being behind the barber’s chair and ‘‘learning how other people live’’.

In his barber’s shop, he wanted to create a business that catered ‘‘for anyone and everyone’’.

‘‘I realise that, for me as a barber, I enjoy everybody’s company.

‘‘I don’t want to stick to one type of demographic. I’ll cut an 18 month boy right up to a man who gets brought in by his wife, with Alzheimer's, and everything else in between.’’

Asked if he was proud of how he had turned his life around, Mr Siggleko hesitated.

‘‘I guess I’m proud. I know there’s people that are a lot more prouder of me than I am.

He enjoyed his involvement with Moana House, saying he had met some amazing people.

‘‘Everyone’s got potential.’’ While it was not so much talking about his experiences, or telling them what to do, he was happy to lead by example.

And as far as the barbershop went, he enjoyed cutting hair so much he rarely looked at the time.

‘‘Sometimes I have a glimpse and its 3.30pm. That’s when you know you love what you do.

‘I’m not here to make millions and build a brand ... I’m just here to create a space that’s safe for everyone.’’

And, during any down time, there was always the dartboard beside the barber’s chair to have a throw. As an added incentive, any client that could hit 180 points got a free haircut.

His five-year goal was to open a men’s grooming school while he would also love to return to the Otago Corrections Facility — on the right side of the law — and start a barbering course.

REALLY well done Jamie, glad you are getting the rewards and thanks for a great positive story ODT.

Good effort Jamie, all the best for your future
Marty

That is an extremely impressive change of direction, awesome story!