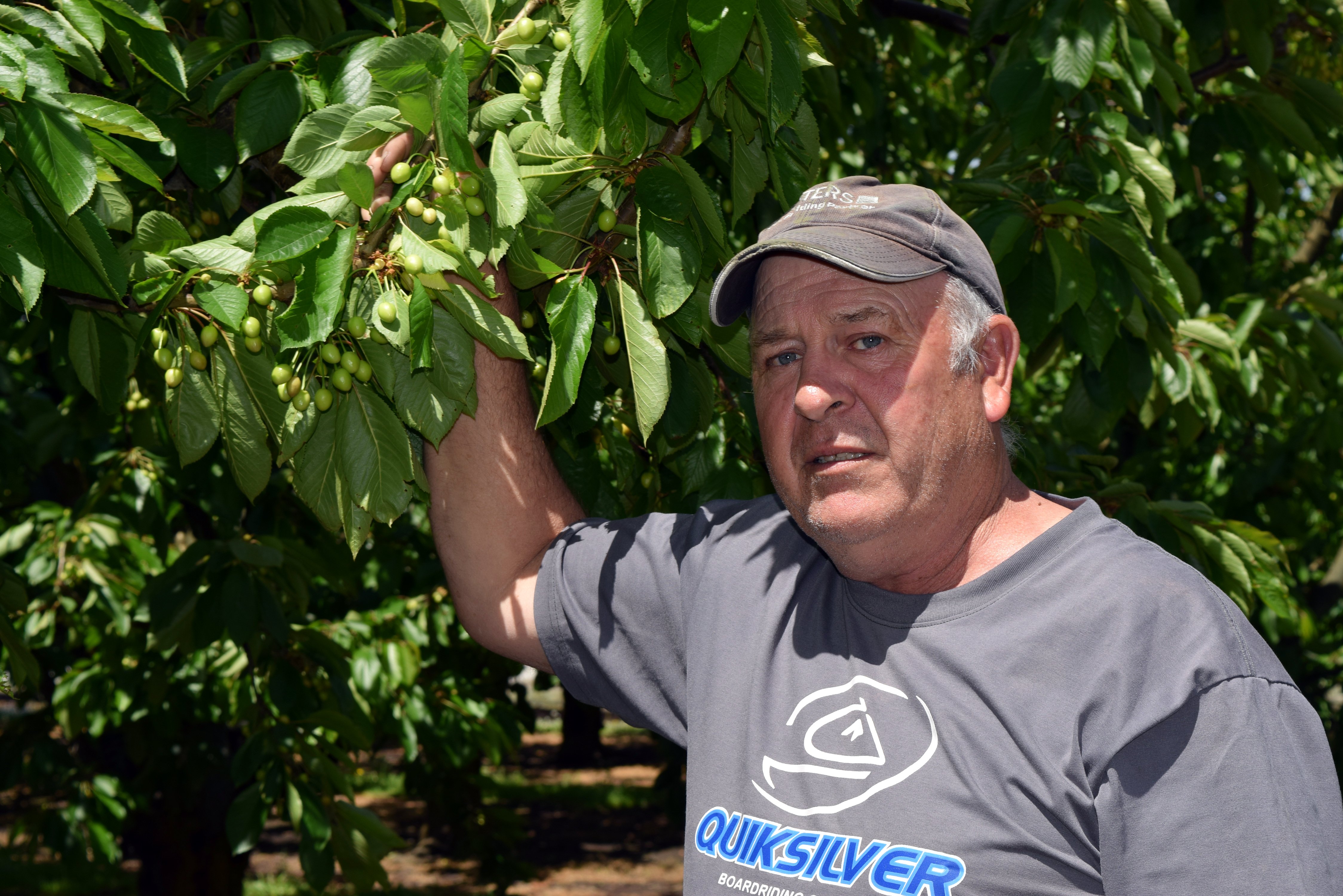 The Big Cherry owner Chris Toms inspects cherries he fears may go to waste on his Teviot Valley orchard due to a staff shortage. PHOTO: SHAWN MCAVINUE
Otago cherry growers are scrambling for staff to pick a bumper crop.

The Big Cherry owner Chris Toms said picking of his 4ha of cherries in Coal Creek, Teviot Valley, begins next week and runs until the end of February.

Traditionally, he had organised the 30 staff needed to pick the cherries.

About a third were New Zealanders and the rest were backpackers - a mix including Czech, French and German.

Many of them were professional cherry pickers following a global season.

‘‘They are fantastic pickers.’’

This season, he had only been able to secure nine staff - seven locals and two students living outside the valley.

The weather had been good and the cherry crop was ‘‘medium to heavy’’, the fifth-generation cherry grower said, and if he could not find more staff soon, many of his cherries would go to waste.

‘‘We could potentially lose hundreds of thousands of dollars worth of fruit. We are just going to have to pick the varieties that are worth the most.’’

Many backpackers stayed in New Zealand after lockdown hit last year and they had their working visas extended, allowing them to pick cherries last summer.

However, they needed to get their visa extended again to pick this season.

He was frustrated at how slowly the Government processed visa extensions.

Many backpackers got tired of waiting and found work picking in Australia.

‘‘Nearly all the backpackers were gone by the time they got their visa extensions.’’

To attract pickers, he provided free accommodation, including some new cabins.

If no more workers could be recruited, he hoped neighbouring orchardists could pool staff to get the job done.

He hoped when staff of Fairview Orchard owner Jered Tate finished thinning apricots they could join his staff picking cherries and then all of them could pick apricots at Fairview. 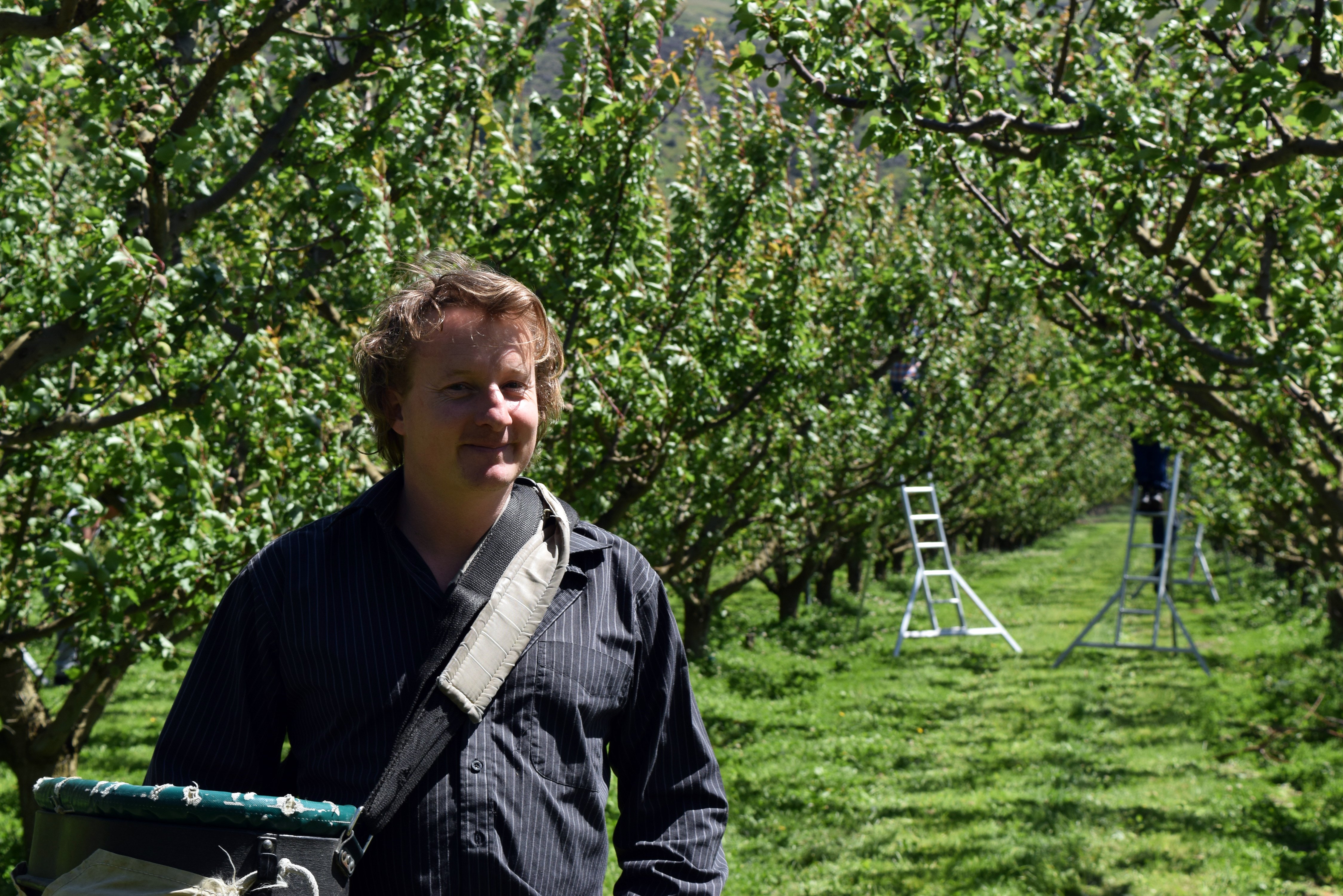 He was advertising for staff the same way he did every year.

Usually as soon as the vacancies were advertised, he got five inquiries a day.

This season ‘‘the phone ain’t ringing’’.

He believed the shortage was due to a lack of backpackers and a low unemployment rate.

He offered a great working experience but more pay was always going to ‘‘win the fight’’.

Staff accommodation was a ‘‘frustration’’ this season.

He had accommodation for five workers and a communal toilet block, which had been sufficient in the past, because backpackers slept in their campervans.

He was expecting to work long hours this season, due to the staff shortage and bumper season.

‘‘I’ve been on this orchard five years and this is by far the biggest crop we’ve had.’’

Cheeki Cherries owner Martin Milne, of Cromwell, said he had been growing cherries for about a decade.

He once owned three cherry orchards in the district - about 6000 trees, producing about 100 tonnes of fruit.

However, he sold his largest orchard in March this year to battle a staff shortage.

The sale allowed him to move the focus from his export arm to his pick-your-own and mail order operation.

He once needed 130 staff at peak times but now he would need up to 30 staff - a mix of his own and contractors.

Another motivation for selling the orchard was the ‘‘mind-boggling’’ number of cherry trees being planted in Central Otago.

He expected it would become harder to find staff and find accommodation for them, especially when campgrounds were closing for housing developments.

Profit margins were tighter, as costs skyrocket and the price paid by grower aggregators remain the same.

‘‘Margins are going down and I think they’ll keep going like that.’’

He expected demand for cherries to be strong this Christmas, especially if Covid restrictions stopped Aucklanders holidaying in Central Otago, prompting them to order online.

If Aucklanders were allowed in the South, he expected them to visit and pick their own.

‘‘They came down in their droves last year - it was brilliant.’’

Central Otago District Council has launched its Spare Room-Spare Time campaign urging locals with a spare room to encourage friends and family living outside the district to pick this summer to ease the staff shortages.

Central Otago Mayor Tim Cadogan said he planned to work in an orchard while the council was closed over summer “because this is really an ‘all hands to the pump’ situation for our community”.

“So spare a moment and think ‘how can I help?’ Do you have some spare time to work in an orchard, packhouse or winery? Do you have a spare room for a boarder for a few weeks or do you have a relative who could come to Central for summer and help us with our problem?

‘‘We are all in this together, and together we will prevail.”

Every year, without fail, we hear the cherry growers bleat about why they are not going to be able to supply the market. There are going to be shortages, too much rain, too little sun, late frosts, labour shortages and god knows what else, every year, same old story. It’s a wonder that anyone survives in the industry.
Still the tactic works, it enables them to drive up the prices, even though there is no obvious shortage of cherries in the supermarkets in the couple of weeks before Christmas, they’re selling them at over $24 kg.
And after Christmas, still plenty of cherries, but the price has tumbled.
It’ll be the s@me this time next year. Outright nonsense.

I was a 5th generation apple orchadist.
Every year there are issues, it's a gamblers game. The only time you win big is when another country gets wiped out and NZ gets to sell at higher prices to fill the void.
Turners & Growers T&G now a 75% owned German company has a good strangle hold on the industry as well.
Much more money in being a builder and a hell of a lot less stress.