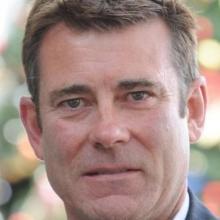 Michael Woodhouse
A Dunedin city councillor has labelled National List MP Michael Woodhouse "desperate'' for lashing out at critics after losing the party vote in Dunedin.

He said there had been no delays in the rebuild and he would stake his career on Dunedin getting a "really good hospital''.

"I think Mr Woodhouse is right in that the widespread and valid concerns around public healthcare in Dunedin almost certainly cost his party votes in the election.

"It's a bit desperate for him to then blame that on council's campaign for our hospital to be rebuilt downtown.

"He's continually tried to paint the campaign as a partisan political issue led by ... Cr [David] Benson-Pope and myself, but the fact is we have had broad support in the community.''

Cr Benson-Pope said Mr Woodhouse had been "missing in action'' regarding the rebuild.

"Anyone who's been involved in the process would comment that he has been missing in action.''

If he now wanted to be involved, Mr Woodhouse could organise representation for the city council and University of Otago on the rebuild group, Cr Benson-Pope said.

"The best way to convince us that progress is being made is to get a representative from the city ... on that working group so we know what's going on.''

He rubbished Mr Woodhouse's claim there had been no delays in rebuilding the hospital.

"The hospital has been delayed, delayed and delayed. You only have to look at the time these promises started.''

When Mr Woodhouse was contacted for a response, a spokeswoman said he had nothing to add to his earlier comments.

National made big gains in the party vote in Dunedin in the 2011 and 2014 elections, but on Saturday received 28% in Dunedin North and 36% in Dunedin South. Special votes may erode its share further.

In 2011, National received the biggest combined Dunedin party vote across the two electorates, and in 2014 National won the party vote in both seats individually.

Labour picked up about 7600 extra votes in Dunedin; its improved showing was helped by a drop in the Green Party vote.

Anyone interested in the facts, and therefore the truth, about the Dunedin City Council's 'Dunedin Hospital re-build SOS' campaign only has to look at Dunedin City Council minutes. The campaign was initiated in a council meeting (Feb or March, from memory) moved by Cr Benson-Pope and seconded by Cr Hawkins, and solely designed and funded by the DCC. As a person with many year's experience as an observer of local government, I thought right from the start this was an improper involvement of a local body in central government concerns. Unfortunately, virtually no one seemed to agree with me including the DCC CE, Dr Bidrose and even Office of the Auditor-General, who seemed to me to make no distinction between 'advocacy' (even when a considerable amount of council money was spent on it) and 'campaigning' which inevitably involves spending money on advertising. I still think an extremely bad precedent has been set and where the boundary lies between campaigning and advocacy still needs to be clearly set for local bodies like the DCC.

I agree with Diane Yeldon's comments, but perhaps this additional 'advocacy' is a requirement because the government relieved the SDHB elected representatives who presumably would have done this. On that note. Would/Could all major parties please confirm to the good southern people that the 2019 DHB election will go ahead? David Clark confirmed to me Labour would. Michael? Winston, where is New Zealand First on this one?