Jacinda ardern at mycoplasma-bovis meeting. Photo: ODT
July 22, 2017, will go down as a significant date in New Zealand’s agricultural history. On that day, bacterial cattle disease Mycoplasma bovis was confirmed as being in the country, triggering New Zealand’s largest and most expensive biosecurity response. Sally Rae, who has covered the outbreak since the beginning, reflects on the past year and also talks to the man charged with heading the national response.

Geoff Gwyn admits hearing from farmers hit by Mycoplasma bovis is the toughest part of his job.

"These stories are intensely personal. Being under regulatory control or, worst case scenario, having a herd built up over decades culled is a really tough time for people.

"It has a large impact on their psyche, their mental health, the financial viability of their business. All these are hard conversations to have."

But  the role of public spokesman is  important to the former police inspector.

As he says, "things that keep me awake at night are decisions we make impact on people’s lives."

He acknowledged  that took its toll.

"You do lose sleep over some of the decisions you have to make."

But in some instances, the decision being made was for the national good — for the owners of 24,500 farms throughout the country — but it might have a very detrimental effect on a small number of farmers, he said.

Mycoplasma bovis can have serious effects on cattle including mastitis, abortion, pneumonia and arthritis. 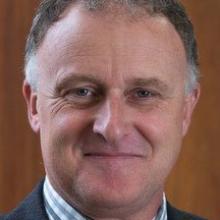 Geoff Gwyn
It has come at a cost to New Zealand; not only the whopping $886 million price tag of the attempted phased eradication plan under way but also the very real human and animal toll it has taken.

To date, stock on 30 properties have been culled, comprising 32,000 animals, and more than 150,000 cattle would be culled under the plan.

The response has highlighted many issues, including gaping holes in the National Animal Identification and Tracing (NAIT) scheme, the speed of the response and compensation payouts and widespread criticism that Ministry for Primary Industries officials and staff did not understand farming.

Stories have been harrowing: there has been talk of the bullying and "demonising" of people who were part of the testing process, of rumour mills and gossip coupled with heartbreaking stories of farmers having to send to slaughter top-performing herds built up through years of hard graft.

Former variable lower-order sharemilkers Sarel and Mary Potgieter, who were on the first property confirmed with the disease, ended up living in a leaky caravan in Australia, having been forced to sell even household items to pay debts.

They also had to endure watching the cattle in their charge dispatched for slaughter, including pet cows.

One affected farmer warned those impacted to  prepare to lose not only money and stock but also sleep, time and friends.

Contracts have been cancelled for stock based only on the  area they came from, despite having no trace of the disease, while Dr Daniel Tisch, of the University of Auckland’s department of management and international business, said the mental and emotional state of farmers would be affected for years.

It was understandable some mistakes would have been made since the beginning of the response but people should have learned  by now, he  said.

He encouraged MPI to concentrate on those learnings, see what had not gone to plan and see if it could "kick this out of the park by having a complete ABC guide of what to do for staff and achieve things quickly". By now, he believed it should have been "business as usual".

Mr Lewis, who received many emails and phone calls from affected farmers, said MPI had done a good job in some cases and that should be acknowledged.  But other cases were

He urged farmers to contact Federated Farmers with feedback, both positive and negative, so  it could advocate on their behalf.

Eradication was a big call — "let’s give it a good crack" — and everyone had to play their part.

"We need to make sure the weak link in the chain is sorted out as soon as possible," he said.

For the first few months, the focus was very much on VLDG, the high-profile operation founded by Aad  and Wilma van Leeuwen, which includes the world’s largest robotic dairy barn.

But months later it was revealed  Southland was believed to be where the disease first took hold.

The farming operation at the centre of the outbreak was Southern Centre Dairies, owned by Alfons and Gea Zeestraten.

The revelation the business used a veterinary clinic about 1600km away on Waiheke Island raised  some concerns  over the use of distant  veterinary services.

Asked why it took so long for the focus to shift  from VLDG to Southern Centre Dairies — particularly given a family link between the two operations —  Mr Gwyn said the initial focus was around the NAIT system and interviews with farmers where NAIT records were not complete.

There were various reasons why there was a delay,  including dealing with a lot of other properties. Tracing was quite a problematic exercise, he said.

But tracing stock movements should have been a simple task if the much-maligned NAIT scheme had been working effectively and farmers had kept accurate stock records. A subsequent review was released and various recommendations made to improve the programme.

Asked what he would have done differently if the past year could be replayed, Mr Gwyn said he would look at how support was provided to farmers earlier.

While intentions were always good and officials  had done their best, he felt it had taken "a bit longer" than he would have liked.

Poor communication from MPI had repeatedly been  raised and Mr Gwyn said that had improved, along with the speed of the compensation process.

Communication was a "perennial challenge". A group of farmers gathered in Wellington this week to talk through systems, processes and timelines and to point out what was good and what was not.

However, it was made clear to them  some things they wanted changed  might never happen because of regulatory or technical requirements, he said.

To date, how the disease came to New Zealand has not been established. While that investigation had not been abandoned, Mr Gwyn acknowledged the likelihood of finding it was "probably slim".  Compliance-based and technical-based investigations were still going on. In March, search warrants were executed on several properties relating to possible breaches of legislation.

Asked what had happened as a result of those warrants being executed, Mr Gwyn said MPI was recently due to issue a press release in relation to the outcome.

But it found out another regulatory agency had an interest in that process and so it had been "parked up" until that agency did what it needed to.

Asked whether he believed that eradication could be achieved, Mr Gwyn said he was "cautiously optimistic" — and he said that with "some trepidation".

It was still critically important to achieve eradication and that measured optimism came with a caveat around the results of the second bulk milk surveillance programme this spring.

Mycoplasma bovis could hide in an infected cow, not showing up until weeks or months after the animal had contracted the disease.

The spring months were the best time to test for the disease because infected animals were more likely to shed the bacteria after a stressful period, such as calving and the start of lactation.

If it was to be eradicated, then the next two years would be the "heavy lifting" and after that, there would have to be a more long-term surveillance operation.

When a crisis occurred, people tended to "up their game" and — as it abated — they could drop their game.

Farmers needed to comply with NAIT and practice good biosecurity. The vast majority did but there was a small set — "as with any industry" — that perhaps did not.

Everybody had learnt something from the outbreak. It had shown that organisations could do better, he said.

Riiight... so Mr Gwynn feels bad. Perhaps he should have felt bad enough to get something done a year or two ago when the first signs of M bovis appeared?. Why was no-one tracking where excess milk was being sent to from the Van Leuven farms? why was there no requirement for double fencing? why was NATE not implemented and enforced properly? Why did MPI sit on its hands for so long? Answer: because MPI still sees its role as promoting farming and trade, and only bothering with biosecurity risks that will impact on our ability to sell overseas. M Bovis was not a priority under the previous government because managing it would cost money. The sad thing is that it is farmers who have to face the consequences. Mr Gwynn should save his sympathy and start doing his job.