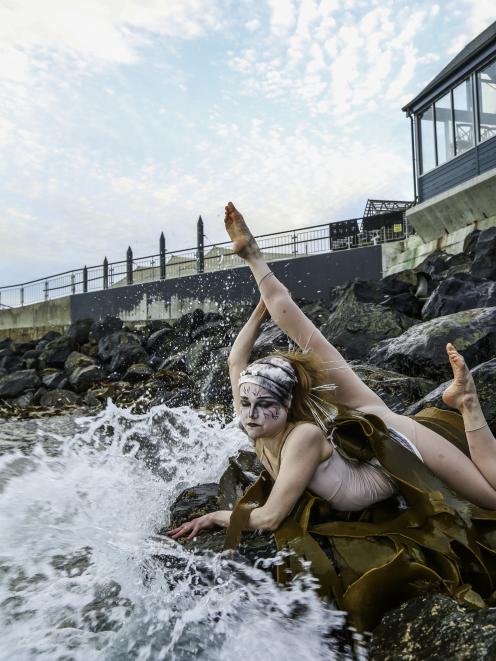 In 120 years, the St Clair hot salt water pool has seen its share of drama, from floods caused by rough seas to a gate-crashing sea lion.

But the popular outdoor pool has never hosted anything like the event that will be held there during next month's Dunedin Fringe Festival.

Elemental will combine the skills of aerial performers with the excitement of contemporary dance, synchronised swimming, live singers and fire dancers.

The action will take place in and around the water, and will include aerialists 6m above the pool performing with ropes, hammock-like nets, steel rings and a static trapeze.

Brophy Aerials director Rochelle Brophy says pool managers were initially concerned about what would happen if her students fell but the worst possible outcome was that they would get wet.

``It's the safest job we've ever done ... We usually perform over concrete.''

Brophy was at Moana Pool with her daughter when she began eyeing up the high roof, big beams and diving boards as potential props for her aerial performers.

With late opening hours making it difficult to schedule rehearsals there, she visited the salt water pool, thought the background was ``amazing'' and designed a show around it.

``I was originally thinking that the elements - air, fire and water - would be really interesting [to incorporate]. Then I thought it would be nice to have a Maori flavour to it,'' she says, adding that she was adopted and only discovered her Maori heritage when she met her birth father for the first time about 15 years ago.

Director Jonathan Cweorth says the show will present the Maori creation story of Ranginui and Papatuanuku - the sky father and earth mother - and also feature Takaroa, the god of the sea, who, in the South Island version of the story, is Rangi's jealous rival.

Cweorth is delighted with the outdoor venue, saying the show is about the Gods of the earth, sea and sky, ``and at St Clair, all those elements are around us''.

As audience members walk along the Esplanade, ``sea creatures'' on the rocks will draw them in, Brophy says. Beyond the pool entrance, the god of the earth will perform with sand, surrounded by drummers; the god of volcanoes will be working with fire and aerialists on a metal ring suspended from a truss over the pool will be dipped in and out of the water.

The potential for wind and rain means they will probably not use the aerial silks they often wrap themselves in while performing acrobatics.

The long strips of fabric did feature in Brophy's first Dunedin performance after she had moved from Australia seven years ago.

``Paul Smith, who was the fringe director back then, asked if I was interested in working above the Octagon hanging from a crane and I said, `Why not? It sounds like fun'.''

Aerialists climb the suspended fabric without the use of safety harnesses and the first thing they learn is how to fall correctly.

``I always say height is our friend because if you're in trouble, it gives you time to think and to get out of trouble.''

A former dancer who joined a circus as a magician's assistant, 47-year-old Brophy taught herself aerial skills when the big top's aerial performers refused to divulge their secrets.

Some of the 50 to 60 people attending her Dunedin classes are there because they are scared of heights and want to get out of their comfort zones.

Also working on Elemental is Emma Holloway, who is choreographing the contemporary dancers. She, Brophy and Cweorth are the same team who produced Circus Alice - an acrobatic take on Lewis Carroll's tales - winner of the outstanding innovation award at the 2016 Dunedin Theatre Awards.

The 25 or so performers will also include the Aquagold synchronized swimmers led by Emma Simpson-Boyce, singer Ana Good, and drummers The Unfortunate Repercussions.

Cweorth, who also performs with the Dunedin Medieval Society, says it is an ``extraordinary'' range of performance skills to draw upon.

``Integrating all those [art forms] into a coherent whole is a challenge ... but it's also an absolute joy when it works.

``It'll be a remarkable and spectacular show, I hope, and something very different.''