The art of the city 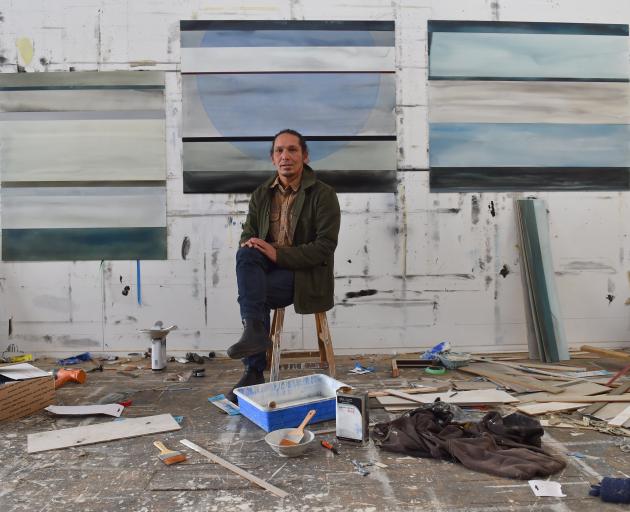 Simon Kaan in his Fryatt St studio. PHOTO: GREGOR RICHARDSON
Dunedin artist Simon Kaan has been selected as one of 18 Asian-New Zealanders to be featured in a new series highlighting the achievements of top pan-Asian creatives. Rebecca Fox asks Kaan how his heritage has informed his work and the city’s urban landscape.

Dunedin's new built landscape is starting to feature touches of Otago’s diverse cultural history, much of it influenced by artist Simon Kaan.

The artist, known for his paintings using a "soft focus, tranquil palette and finely stacked horizons, peppered with delicately rendered symbols and icons", is the design lead for Aukaha, an Otago runaka-based consultancy service.

"I work with the architects to ensure mana whenua aspirations and values are embedded within the project and can inform cultural change within organisations."

It is a role that fits perfectly with his artistic practice, which has always been about identity and place and influenced by his Chinese, Ngai Tahu and Pakeha heritage.

"It’s been a natural process for me over the years. Ideas about identity and my own place in the world [are] something that [have] dictated my art practice for a long time."

His Chinese grandfather came to New Zealand in the 1890s. His grandmother came out from China in the 1930s, and they went on to settle in Sawyers Bay and have eight children. They set up and ran a fruit shop at Port Chalmers.

"They were an integral part of the community."

Kaan can remember working with his dad, aunts and uncles in the shop and meeting many of the community’s characters.

While he left the city for a while, he returned when his father died 25 years ago to be closer to his mother, who he gets his Ngai Tahu whakapapa from, and has stayed, as he found the city to be a creative hub — and with cheap rents, a financially viable place to be as an artist.

"There’s enough artists here to not feel isolated and it’s also a beautiful place to be. I get a lot of inspiration from the ocean and landscapes here. It’s very much part of my being."

Kaan is proud to be involved in the urban development of the city he grew up in and the wider region.

"There is a cultural change and shift of mana whenua being seen within the environment, which has been lacking in the past 100 years or so as far as urban development goes.

"It’s really enriching work but it’s taken me out of my studio a lot in the past few years. But they feed into each other, there is a lot of great research that happens. I end up doing a lot of learning and have a deeper understanding of Ngai Tahu values and how they translate into projects."

His work can already be seen on the frontage of Ebb Hotel, along the side of Kaan Catering Supplies’ new warehouse and on the new roadside panels at Port Chalmers.

He has also been part of engaging other Ngai Tahu artists to influence new projects such as the George St redevelopment, new Dunedin Hospital and the soon-to-be-constructed ACC building in Dowling St.

"Its going to make a really interesting visual cultural presence with the city."

Most important, he says, is the development of healthy relationships with treaty partners such as the Dunedin City Council and Otago University.

"It’s great to be part of the conversations with those design projects and them seeing the value in it it’s not just token anymore. We’re having some really robust conversations."

It is not only Dunedin that benefits from his work. For the past four to five years he has also been working on the large-scale Te Aika 2021 with fellow artist Rachel Rakena. It stands outside Christchurch’s new convention centre, Te Pae.

Kaan has also been working to build up capacity in the organisation, bringing on board young artists, designers and architects to take part in these projects. Ultimately he hopes this will enable him to spend more time on his own art practice.

"That is where my heart really lies. It is really important to me spiritually, I really need it in my life."

But most important to him is his partner and three boys.

"They’re my most important job, growing together with them, that’s what we all do it for really."

He is only able to fit in one solo show a year and has one coming up in Auckland, but also co-curated the Paemanu group exhibition of contemporary Ngai Tahu artists’ work at Dunedin Public Art Gallery this year.

"We’ve had a great response. Bringing young artists in with us has been important. Working in a community as an artist is important rather than just as an individual. Having people working on a similar kaupapa to you, you are not so isolated and have that support around you."

He also, together with Otago Polytechnic lecturer and ex-restaurateur Ron Bull, formed the Kaihaukai Collective about 10 years ago. It develops indigenous food and identity projects, educating not only New Zealanders but those overseas about mahinga kai.

"Consciously or sub-consciously food helps make up who we are. It is something that brings communities together. The food projects have been really enriching."

Whether his interest developed from his childhood years in the fruit shop, he does not know.

"That gathering and talking around food then was probably quite formative."

Kaan’s wide-ranging interests will be showcased in the documentary ASIA: Art Stories in Aotearoa — Episode One, Fine Art, which he features in alongside this year’s Venice Biennale representative Yuki Kihara and artist Yona Lee.

"It’s a great honour as there are a lot of great artists and other creatives featured, so it’s nice to be included in that."

He supported the documentary’s aim to showcase how New Zealand’s cultural landscape is shifting and how the arts can help the country have broader, more inclusive conversations that build better understanding.

"It’s important for everyone to have a better understanding of each other. I like to think a lot of these conversations help to bridge those stories that haven’t been told before."

“It is a privilege to help share the stories of these brilliant artists and spotlight their achievements. In these challenging times the arts are more important than ever and as New Zealand opens up to the world again, let’s celebrate our evolving cultural identity.”