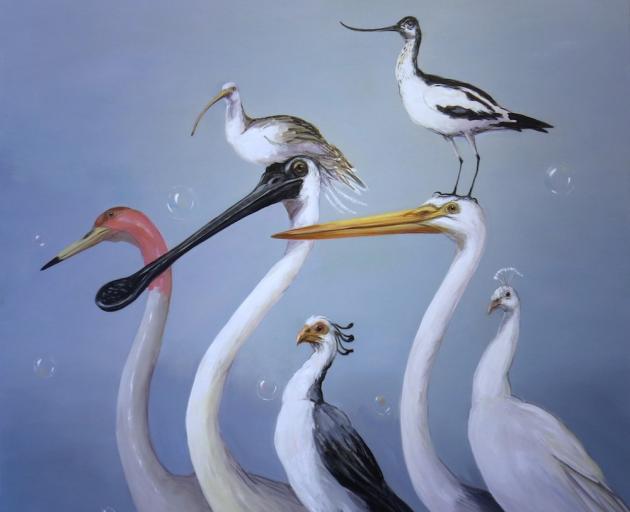 The birds that inhabit Joanna Braithwaite's impressive surreal canvases seem, in many ways, more human than many people she might have painted in their place.

The bold creatures take centre stage in a world of illusion which lives up to the titular nod to Lewis Carroll's imaginary world. There is a sense of balance in the works, whether in the form of mirror reflections, the poised juxtaposition of bird and musical instrument, or in the more literal balancing of one bird supporting others on its head.

There is a lot of narrative at play, although the exact message is frequently ambiguous. In Looking Glass I, for example, a fabulous peacock stares into a mirror, but it is the more drably coloured peahen that stares back.

Is the male's mate the mirror of his thoughts, or his inner persona? Or is the bold female (placed centre stage in the drama) simply shown as more than a match for her flamboyant suitor?

Similar questions are posed by the framed portraits of On reflection II, and by the fragments of press clipping which play a central role in Big Bones and Fresh Freddy.

The presence of studies for some of the works, hanging close to the finished pieces, gives an added insight into the workings of this intriguing artist. 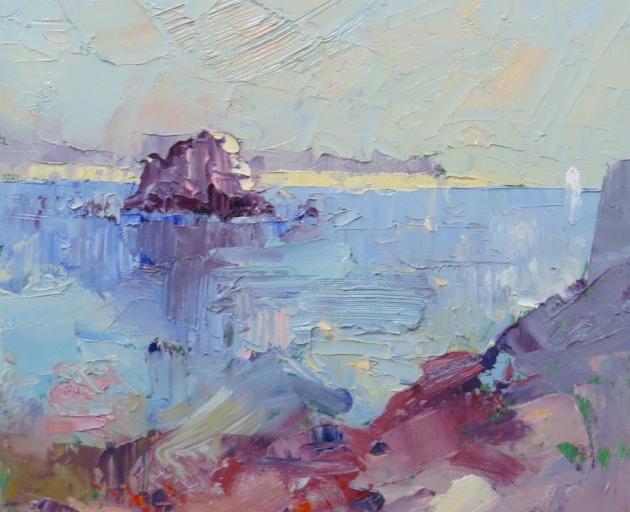 The exhibition is based around works Nicholls has painted as a result of recent trips to Alexandra, Bluff and Nelson, and features several plein air studies. These works, painted on small rectangular panels, are referred to by the artist as ''postcard cameos'', and become the basis for the later works in Nicholls' characteristic square format which he paints in his studio.

It is interesting to see the modifications which the artist makes to the images between the impressionistic initial sketch and the finished work.

In images such as the two views of Fifeshire Rock, the initial busy knifework has been reduced to broad panes of colour, simplifying the design and simultaneously condensing the mood and focus.

The finished works are strongly painted with bold impasto applied with palette knife. At times, the resulting works bear little resemblance to the original scenes, being more an encapsulation of mood and emotion expressed in gestural mark-making.

At other times, the natural views spring strongly to life, taking the viewer straight to the locale. In all cases, Nicholls' bold and impressive style creates strong awareness and feeling of the land and its forms. 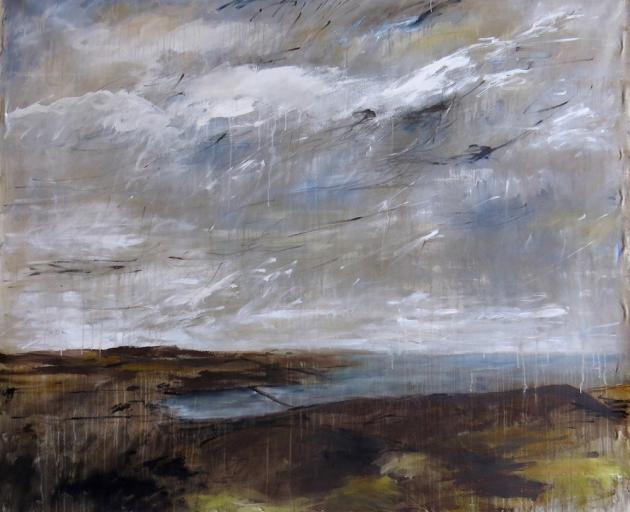 Inge Doesburg's recent stepping-back from sole control of her own gallery has freed up her time to concentrate more on her own art.

The result is a welcome exhibition at RDS Gallery, in which she has presented a series of paintings, prints, and mixed media works, all of which present an Otago of subtle, sombre colours depicted under heavy, muted skies. It is a shame that some of her photographic studies were not also present, but what is here is feast enough.

The rich solidity of the land, as depicted in these works, is matched - and often seemingly challenged - by equally powerful cloud and mist. In images such as Harbour II and Headland the weight of the sky almost seems to press the land down, forcing it into the sea.

In several of the untitled works, the cloud is deliberately painted in strong slabs of impasto, making it seem more concrete than the red earth beneath it.

In other works, such as the impressionistic Untitled (Puddles), the very line between sky and land becomes ambiguous, turning cloud into mountain and vice versa.

However, the large unstretched canvases are the stars of the show. In these, stormy skies weep rivulets of paint over Blueskin Bay and Harbour Cone, creating visual poems of interconnectedness between land and sky.