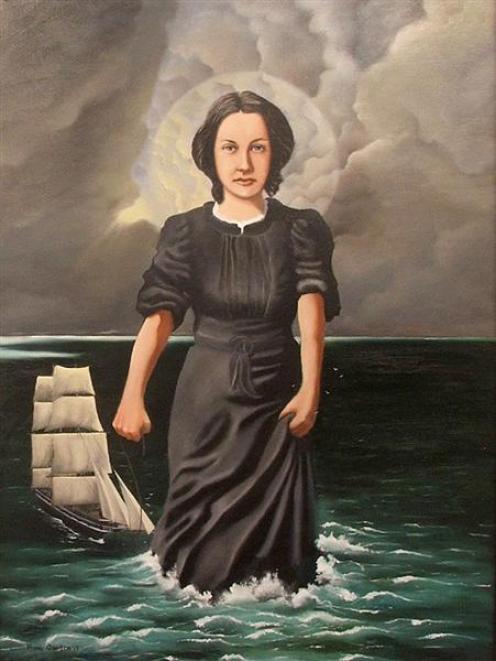 The title of Frank Gordon's exhibition ''Ordinary Icons'' is apt. The faces that stare from the canvas have something of the grace and serenity of church icons while remaining distinctly the features of ordinary people. Simultaneously, the actions in which they are involved could be the stills from films, triggering yet another aspect of the word icon.

The exhibition is something of a surprise to longtime devotees of Gordon's work. Gone are the Chagall-like floating whimsical characters that have populated his aerial views of Dunedin locales. In this exhibition, the faces are distinctive and memorable, in the artist's inimitable style, but the scenes are deliberately anonymous, allowing the characters and their stories to take centre stage. These stories, though often elliptical or enigmatic, are vital, and as such each work becomes a miniature epic.

Gordon has delved into this heady narrative art in the past with his exhibition of saints; this time, however, the icons are not overtly religious, and the viewers must decide for themselves whether the figures are saints or sinners. Several of the characters depicted, such as the ship-guiding Leviathan, are inspired by photographs in the Toitu Otago Settlers Museum's hall of portraits. Others, such as Isobel Gowdie, are inspired by historical characters, and Gordon's wife provides a fine model for the fox-clad Treasure. 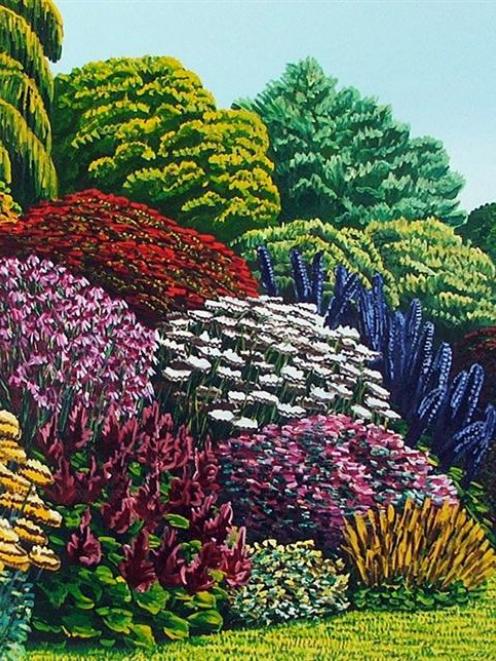 Entering the Milford Galleries at the moment is like entering the upper botanic garden on a summer's day, with the profuse blooms of Karl Maughan's ''Arcadia'' producing a bright profusion of garden colour.

Maughan has long concentrated on large-scale canvases of garden scenes, concentrating often on individual rhododendron bushes and dark pathways leading to dells and glades between them. As his career has progressed, he has moved slowly from a precision-like petal-perfect image to a more confident and free hand. His works now display an impressionistic edge in the controlled frenzy of the painting of individual blooms. From close range, the brushwork becomes almost gestural, yet the garden is still effortlessly and gracefully depicted. The strokes appear not so much as individual leaves and petals, but as the nuanced light playing across them and the solid dark shadows which lie behind.

A wider palette is in evidence in this display of work than is seen in many of Maughan's previous exhibitions. No longer does one key colour dominate a work; instead, a bright profusion of reds, blues, and yellows fills the picture area. The gardens depicted are not specific, but are composites producing a glorious never-known world that is accurately summed up in the exhibition's title. 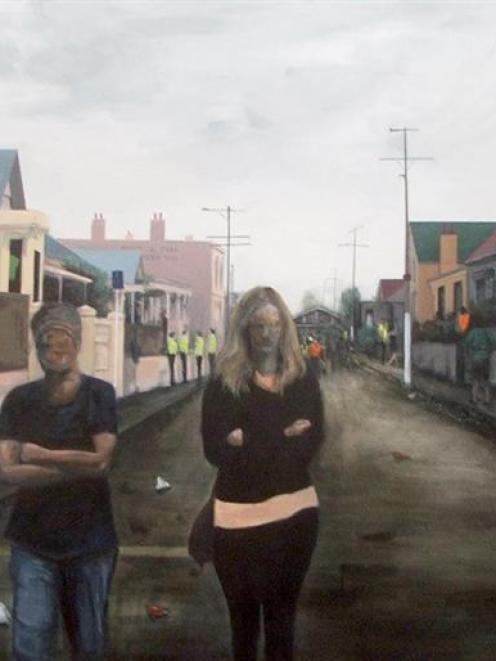 An impressive and varied display of art is on show at the Artist's Room to celebrate the gallery's ninth anniversary. All three of the rooms of the gallery are filled with work, much of it memorable, and a considerable amount of it from artists new to the gallery.

Among the plethora of artists whose work is on display, many stand out. The gallery's main room is dominated by a stunning large charcoal portrait by Tama Taita. Bright and attractive works by Tracey Tawhiao and Mark Compton are also present, as are some of Sam Foley's fine leafy walkways.

The small transition space between the two main gallery rooms has a more introspective feel, marked by an excellent muted portrait by Gillian Buckley and a piece of cold yet compelling minimalism by Greer Clayton.