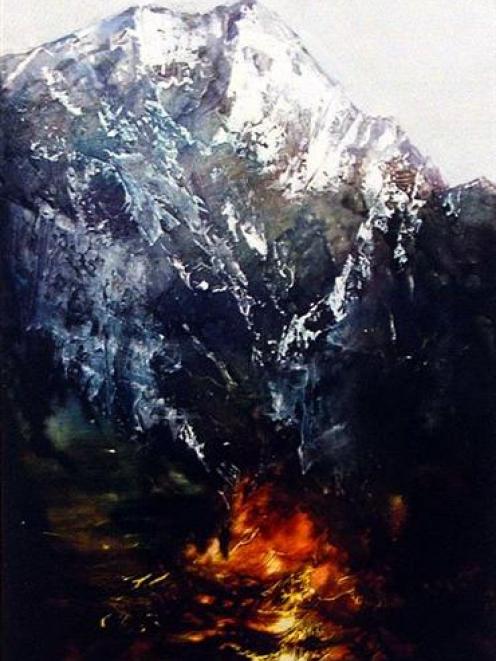 Simon Edwards' landscapes are never less than fascinating. Whether he is producing delicately shaded monochrome works, or glossy clouds of sombre colour, the land is implied and evoked rather than depicted, like bush seen at dusk through heavy rain.

In his latest exhibition, Edwards has created nine works, all of which use heavy, dark shades of cyan and green to produce the forested slopes of the Southern Alps, relieved on some of the works by the bold amber yellows of firelight. In an impressive process, the artist has started with white-painted aluminium sheet, adding veneers of deep colour which he has then rubbed back to reveal highlights. The strong glossiness of the works, provided by the aluminium, thin oils, and varnish, give them the appearance of having been created with printers' ink which is still wet to the touch.

Over this slick surface, the peaks of the mountains stand clear in clotted white, the paint here applied thickly with palette knife. The visual irony of these distant peaks standing out from the surface more than the closer valleys adds to the perceived mistiness of the forest floor.

The works range from several small, almost cameo, pieces to a masterful and powerful triptych, The breadth and blood of distant lands. 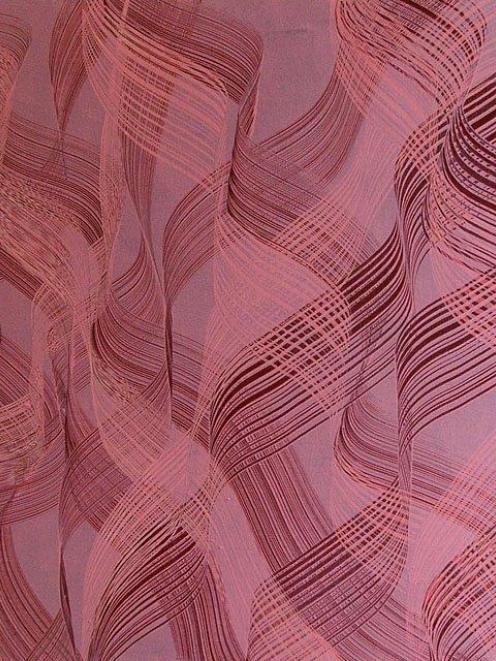 Lorraine Rastorfer has for several years been exploring the nature of the painted surface with her large-scale abstracts, many of which use the concept of the gouging of a still-wet top coat which has been overlaid on a base of a different colour.

In her latest exhibition, ''Vanitas'', Rastorfer has carried this concept one logical step further than in much of her previous work. Where formerly many of Rastorfer's paintings have played with repeated or near-repeated patterns, creating shifting lines of apparent motion (and owing more than a little to the works of such artists as Bridget Riley), in her latest work, uniformity of pattern has largely disappeared, replaced by more gestural marking or the deliberate creation of an all-encompassing individual motif.

This method, which is seen in such works as the exhibition's dramatic titular painting, creates a seemingly organic group of related patterns, giving almost the appearance of a frozen image of a flock of birds in flight. In other works, such as Valence and Glance, the lines of scraped colour produce moire flowers, the lines shifting and contorting into alien botany.

The effect is hypnotic, as the eye follows the interweaving and overlaid interplay of surface paint across the still, revealed background. 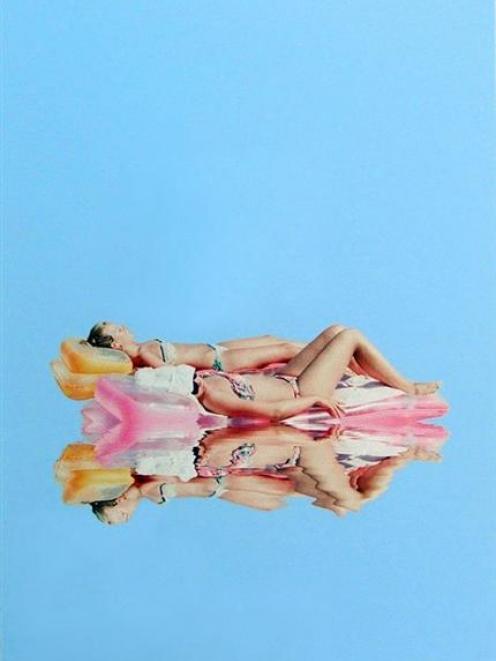 With the arrival of summer comes thoughts of oceanside vacations, and in keeping with that theme come the worked images of Kate van der Drift's photographs.

Using images from European beach resorts, often with the strong lighting and semi-posed feel of vintage travel and fashion magazines, van der Drift has created interesting, evocative art. The photographs fall into two categories, the smaller of which features three monochrome images with the harsh contrast of photojournalism, their Cote d'Azur settings carrying with them a nostalgia for the artificial world of the 1960s jet set.

The larger set of works show colourful and idyllic Riviera scenes bleached by the hot Mediterranean sun. The artist has allowed a process of repeated printing and scanning to deliberately wash out the highlights and reduce dark lines, producing surreal images where the emphasis is on soft blocks of strong saturated colour. Again, this gives the images a nostalgic aura, bringing to mind tourist posters for faraway idylls.

Many of the works have been further manipulated, with features added, often from other photographs. The play of light on water has been introduced where it may have been absent, for example. A nice whimsical touch has also been introduced by the artist in the form of long semi-absurd titles.