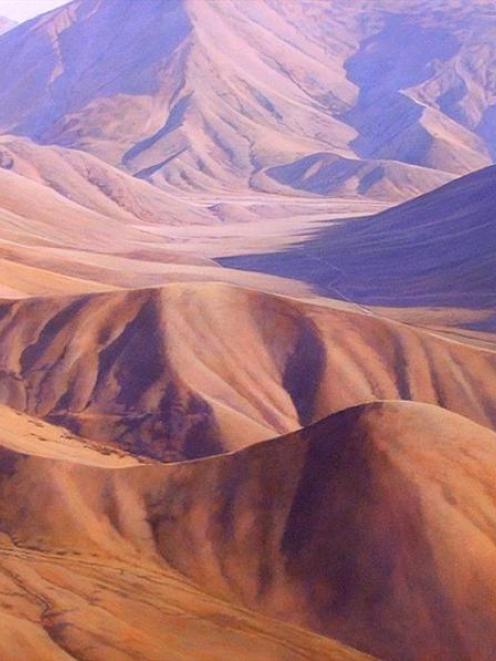 <i>Terrain</i>, by Bruce Hunt. Photos by James Dignan.
When you see some artists' depictions of the southern landscape, you feel you are seeing the land through a window, staring into the scenery yet somehow separated from it. Even top artists such as Grahame Sydney produce works that seem at a slight remove from actually being there.

No such feeling is found when viewing Bruce Hunt's work.Though Sydney's work is an obvious yet simplistic comparison, Hunt's work places you firmly in the land.

The artist has the feel for the terrain's light and colour, gained from his long experience of hiking to its remote vantage points, and he brings this critical eye and deep understanding to his canvases.

Hunt's ability to read the land and present it to us is matched with his skill as a painter. The soft aerial scattering of light blues of the hills as they meld with the horizon, and every fold of the ground is assessed with an eye that is both artistically and geologically precise.

These are as much topographical and tectonic maps as works of art, yet as works of art they succeed perfectly. The land is presented as desolate but not unfriendly, dominating the few traces of human intrusion and softening them to the point where they are simply extra natural elements of the countryside. 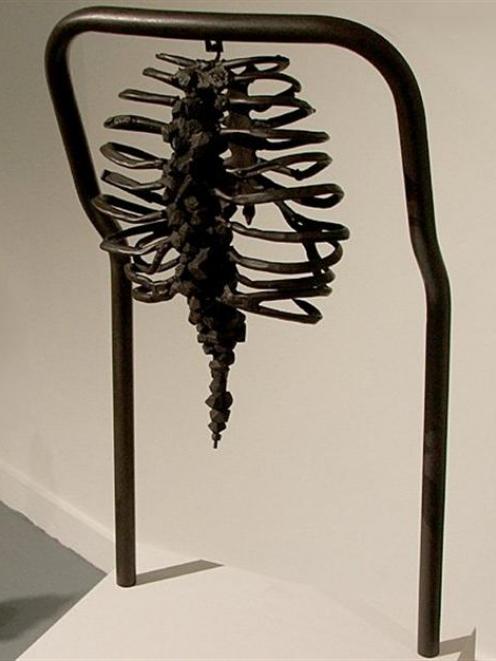 Ben Pearce displays a series of "sculptural relics". Taking the classroom and human internal organs as starting points, Pearce posits our growth from schoolchildren into adults as a subsumation.

We figuratively contain the children we once were just as we literally contain our body parts. The exhibition consists of classroom fragments sculpted into elegantly crafted constructions focusing on and glorifying the body.

Warhol stares from a video screen - yet this is Angela Lyon, dressed for a Warhol screen test.

"Angie Warhol" presides over a series of transmogrified self-portraits based on adolescent bedroom posters. Lyon has photographed herself in the poses of Warhol, Elvis, and Marilyn Manson, and then painted the resulting images.

As with Pearce, Lyon suggest that we are who we once were, modified by our teachings and fantasies, and awaiting our 15 minutes of fame.

Their videos neatly subvert these tropes, one showing menial labour within a gallery, and the other providing a repeated hammer blow on the wall of a disused space. The latter is more poignant, given that the space was for an exhibition by "disappeared" artist Ai Weiwei. 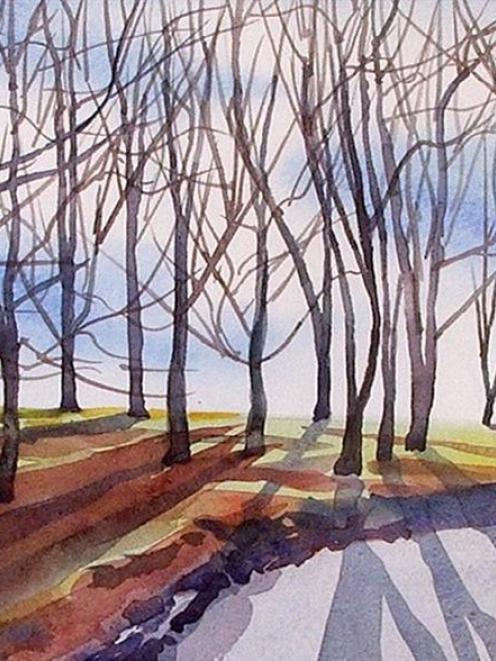 <i>City Copse</i>, by Ron Esplin.
Green Island Gallery is filled with a large assortment of works by Ron Esplin. Though billed as "Southern Scenes", the display is an eclectic collection going far beyond the landscape, with works ranging from impressionistic watercolours to gestural abstract acrylics.

It is fair to say the majority of the works are in the artist's trademark wistful watercolour style, mostly focusing on rural and semi-rural subjects.

Esplin uses the subtle nuances of the medium well, producing gentle colour studies of rustic scenes redolent in the clear light of the South.

More surprising are the artist's experiments in other media. Two digital multi-image works are effective and intriguing, and this is definitely an avenue worthy of further exploration. The handful of acrylic works on display shout for attention, however.

They seem to show that Esplin sometimes needs to be freed from the pastel tones of the watercolour, and when he is, he grabs with both hands the opportunity to use bright, strong tones. The resulting works are bold and bright without being garish, but it is fair to say they lack the deftness with which the artist uses the softer medium. 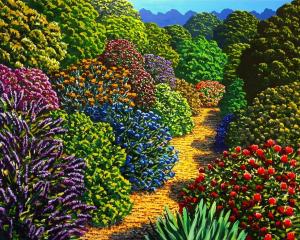