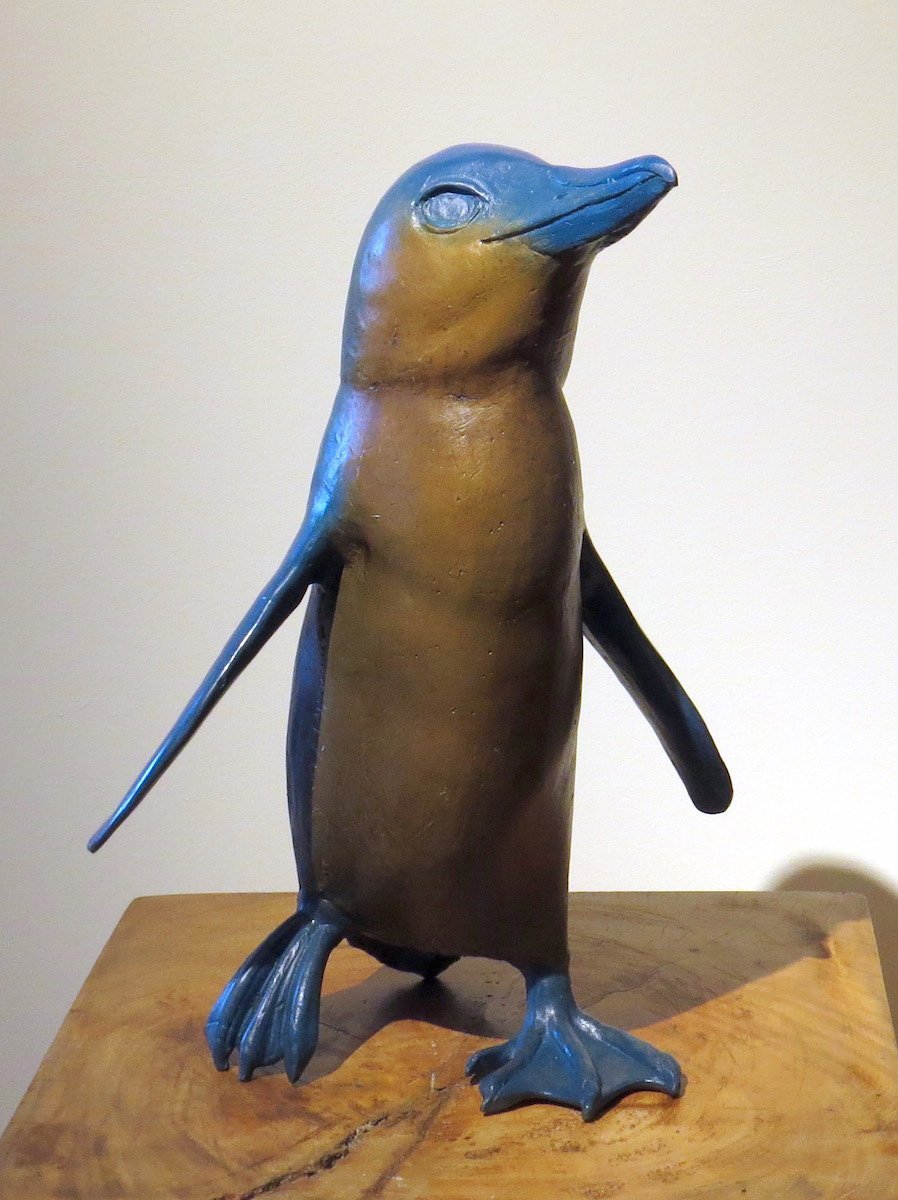 A joint exhibition by Christine Hellyer and Samantha Lissette at Fe29 Gallery takes its cue from the New Zealand natural environment. Within the gallery's bold green paper works and strong bronzes, the viewer is surrounded by the bush and bush creatures, both real and imaginary.

Hellyer provides the majority of works, complemented by a smaller group of bronzes by Lissette. Hellyer's paper works present ambiguous bush scenes, created from dye and crayon. Ferns and other bush plants emerge from within pools of vibrant green, shading off into intense depths of black and glowing sunlit yellows. The strongly delineated plants become focal points against the amorphous coloured backdrops. The artist also provides five patinated bronzes, two of them from her "Hopeless hook" series of zoomorphic abstracts. Two further, larger bronzes are in the form of giant fern fronds. These are accompanied by a delightful "Small lookout", a humorously bedraggled kakapo-like bird sitting on a boat-like branch.

Lissette's bronzes beautifully complement these works. Her Little Blue Penguin and Waxeyes on the Hunt capture and bring character to the birds depicted, and her miniature bronze fruit are charming. The final Lissette work, Riding the Wind, is the exhibition centrepiece, a large assemblage of bronze leaves topped by a friendly giant snail. 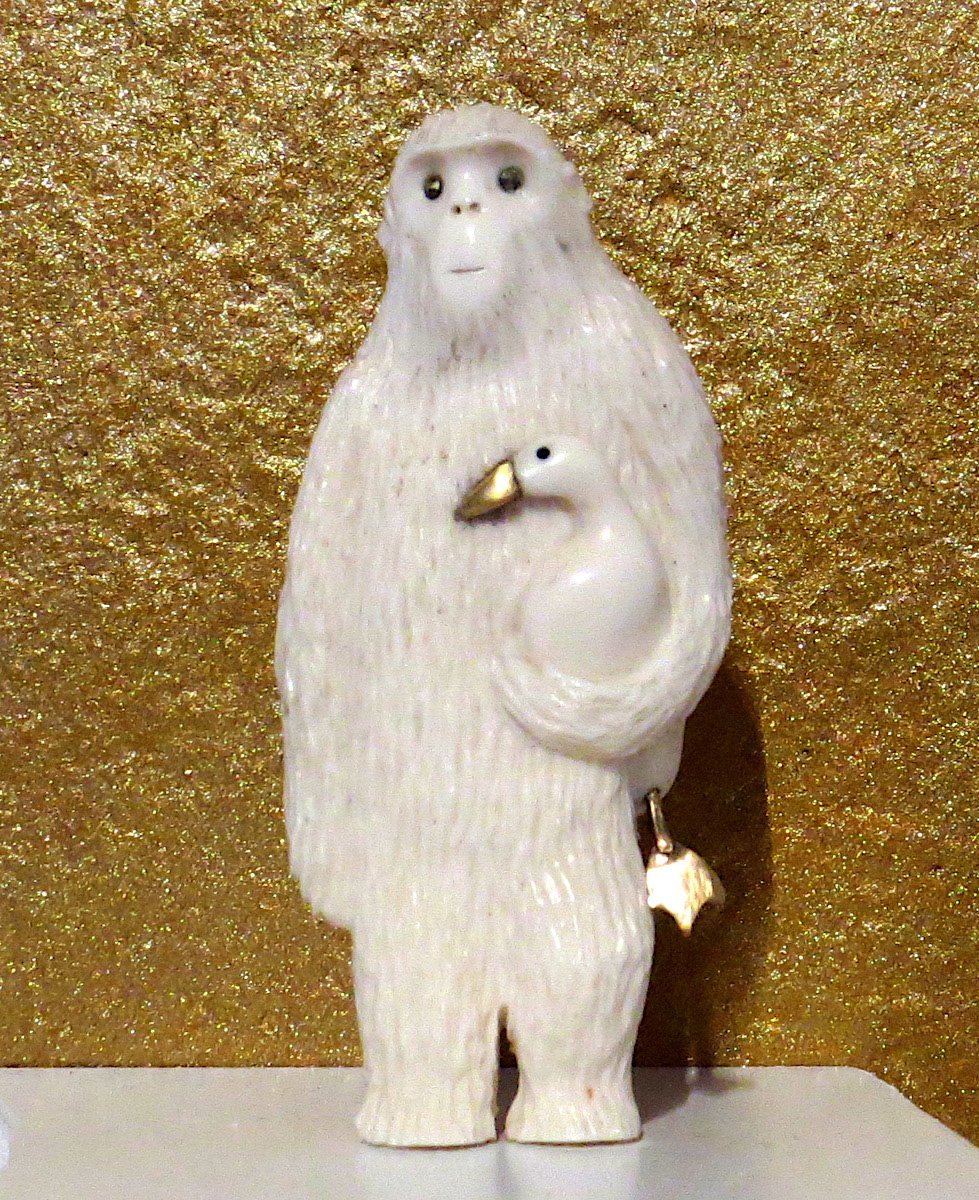 Self-portrait with Duck, by Jane Dodd.
"The Unbelievables", Jane Dodd

Jane Dodd has made a reputation for her whimsical jewellery. Her latest exhibition, her first for Brett McDowell Gallery, presents a series of lovably bizarre brooches and necklaces.

Many of the works depict animals, yet not all of these animals are factual; the artist has created a large yeti-like ape which she calls an Unble. These unbles appear in a series of wryly appealing brooches and also, self-deprecatingly, in the lovely Self-portrait with a Duck. Ducks and geese also appear in several other pieces, including two of the more humorous series, as "secret agents" (in which each creature is hidden within a white sheet) and as "ghosts", where a stray webbed foot can be seen sticking out from under an eerie shroud. Less eerie is the unble with a sheet over its head in a work entitled Fancy Dress.

Perhaps the most appealingly quirky series are the four "travelling case" necklaces, each of which is a small container designed for something that would not normally be boxed. A thin zigzag hollow container, for example, becomes a travelling case for a snake, and similarly tongue-in-cheek works depict travelling cases for ghosts, dogs, and ducks.

The jewellery is constructed from deer antler, silver, and heavy, iron-hard wood, and is worked to a lustrous finish. 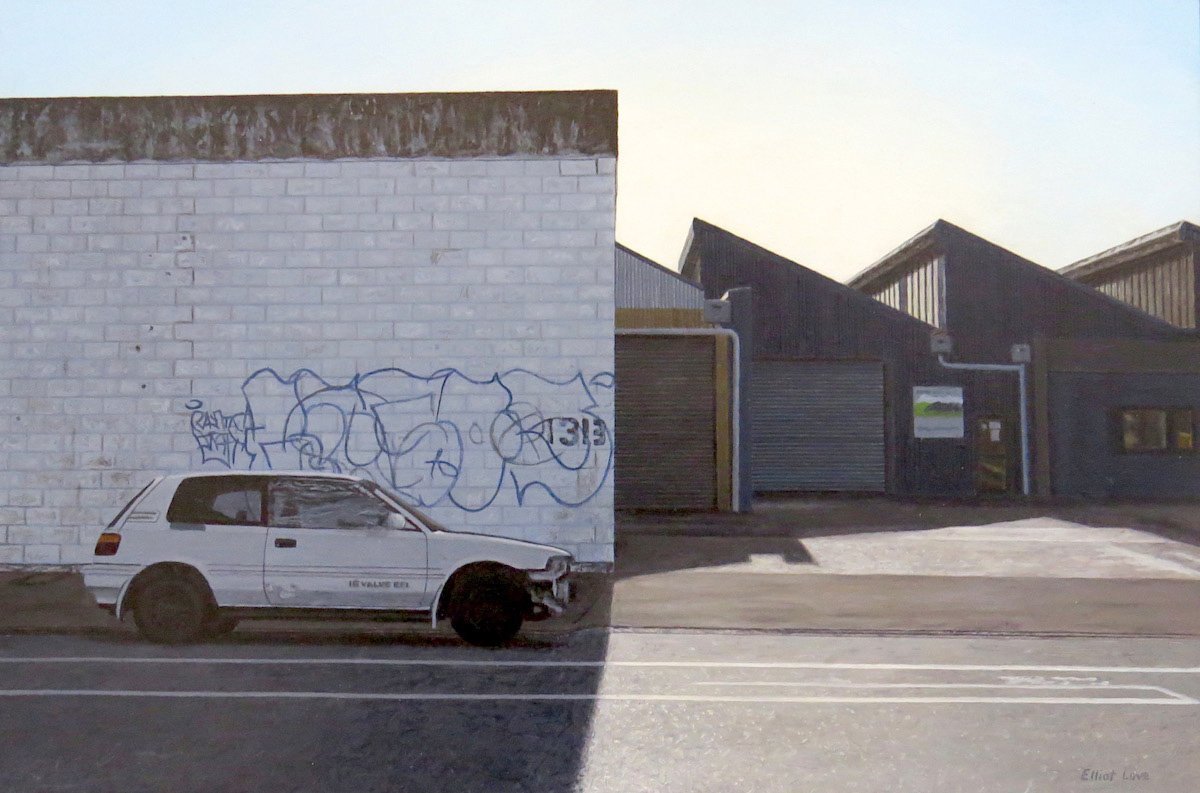 At a quick glance, the paintings of Gemma Campbell and Elliot Love might not seem the best matched combination of images, yet the two disparate subjects and styles work remarkably well together.

Campbell's magic-realist acrylic paintings are works of memory and imagination. In them, the artist uses classical portraiture as a basis to create large group scenes of children and wild animals, the assembly living in peace and harmony. The animals are presented in soft yet meticulously detailed form. Suitcases, toys, and musical instruments are employed to give the works a wistful nature and to hint at the hidden narratives which seem to be within the viewer's reach, yet still inaccessible.

Alongside these works, Love presents a series of realistic townscapes, records of moments in time and space filled with dowdy buildings and dominated by the presence of classic cars. These two subjects are Love's trademark; the artist's love for cars from the 1970s and 80s is coupled with a photographic search for scenes where these vehicles are juxtaposed with slightly grimy streets.

The artist's photographs become the subjects for his haunting oil paintings, in which the play of shadow and light becomes a major character. The streets are empty except for the cars, giving these appealing works a slightly unnerving frisson.