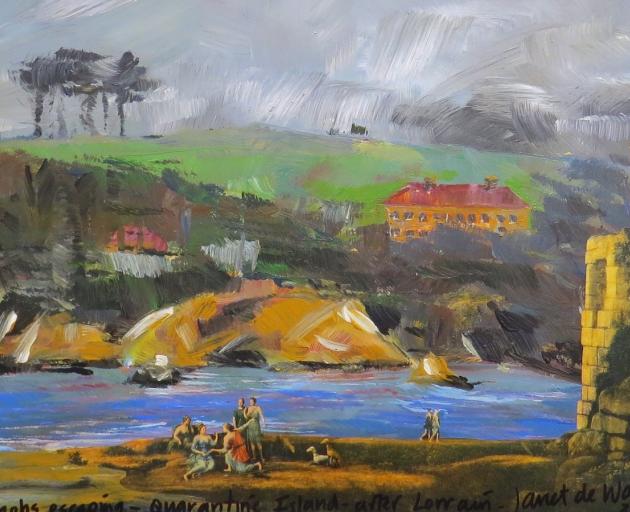 There was a time when no self-respecting middle-class home was complete unless it had a cheap print of an old master hanging in the lounge. Now those prints are more often than not found in second-hand and antique shops.

Janet de Wagt has sought to rescue and resuscitate these prints, using the simple but clever conceit of painting over the majority of the scenes, leaving pertinent details to emerge as part of a new painting. The re-working updates the images, but leaves us with a memory trace of the former works that adds humour and poignancy to their new settings, in a series of paintings which contain strong messages related to ecology and conservation.

The works are inventive, and the styles of the Dutch masters and their ilk blend surprisingly well with de Wagt’s bold strokes. In one particularly dramatic work, Vermeer’s Girl with a Pearl Earring becomes the personification of Saddle Hill, but even here the effect is for the print to stand out yet not jar with the new painting. The works are particularly effective where the old and new parts of the image share the picture area equally (such as in Bring on Chick Science), or are part of a recognisable scene (such as Nymphs Escaping Quarantine Island). 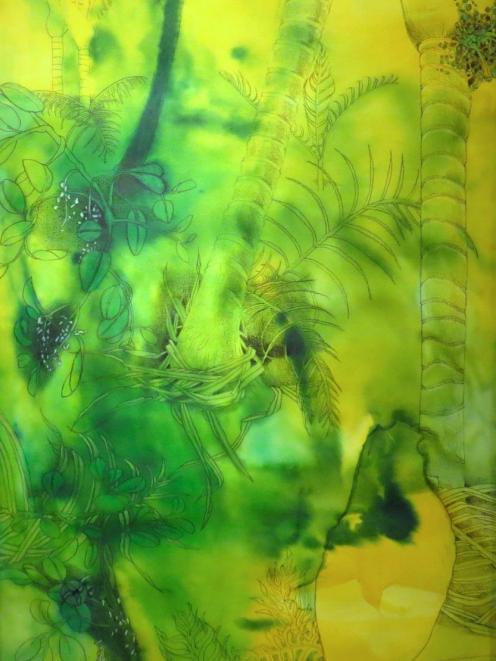 In Praise of Nikau — Kohekohe, by Christine Hellyar

Conservation is also on the mind of Christine Hellyar in her exhibition at Fe29 at St Clair. The forerunner for a larger exhibition by the artist later this year, the current display focuses on three small connected series of drawings of bush vegetation.

A 2003 residency close to Mt Taranaki was the inspiration for one of the artist’s series of works, depicting the heavy, heady forests which flank the mountain. A second series celebrates Waikato’s Nikau Track and the nikau itself, Hellyar’s favourite palm. Alongside these two series, a third is simply titled Plant collections, and emphasises that there are ways to collect plants without picking them, by use of drawing or photograph.

The three series are all lush, verdant works, with bold forest greens and soft yellows forming a wave of abstraction through which the fine detail of the plants emerges, much like focusing on one plant seen through a dappling of closer leaves. The artist has used an unusual mix of media, with the fine detail work drawn meticulously in crayon over a wash of dye, the colours shifting and blurring as the wet dyes run and blend. The overall effect is warm and attractive, simultaneously bright and colourful yet restful and calming. 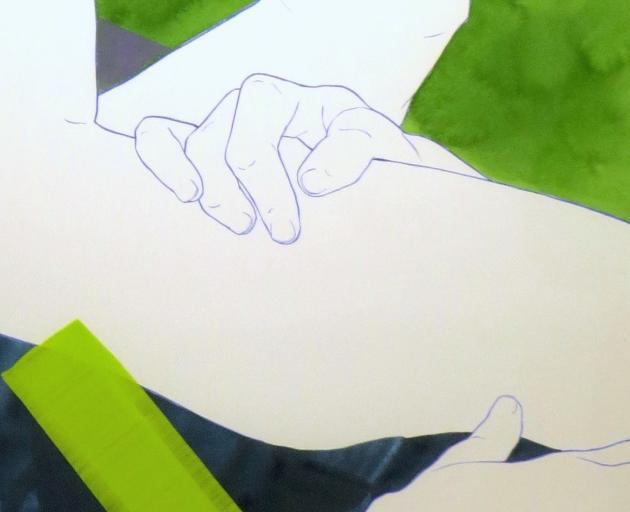 bifColours of the Bedroom 6 (detail), by Aiko Robinson

‘‘Colours of the Bedroom’’, Aiko Robinson

As with Christine Hellyar’s works, Aiko Robinson’s images are a fine mix of the delicately drawn and the colour wash, and both artists use nature as their subject. The nature within Robinson’s work, however, is of a more human, private and carnal variety.

Robinson has taken a bold step in her latest exhibition. Previous works have depicted bodies often overwhelmed by highly detailed and patterned backgrounds. Here, the scenes have been stripped as bare as the bodies within them. Gentle amorphous areas of washed gouache are the only backdrop, suggesting the soft cushions and sheets on which the protagonists perform. The effect is more charming than salacious, and the resulting works are highly attractive.