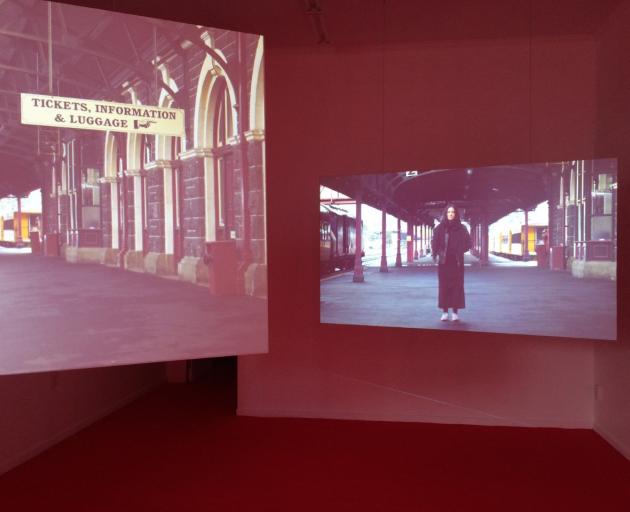 In ''OTHER [Otepoti Chinese]'', Alice Canton has created an immersive environment that draws on her education and experience in fine arts and theatre.

Canton, who works in what could be described as ''expanded theatre'' - she is interested in broadening its scope - has installed thick red drapes across the street-front window. From the outside, the red drapes signal an event, perhaps an invitation, but inside the gallery the drapes produce an intimacy that enhances the visitor's interaction with the artworks.

In tandem with the red drapes, Canton has covered the floor with a red wall-to-wall carpet throughout both gallery spaces. The change in flooring coupled with a row of neatly arranged Chinese slippers cue the visitor to remove their footwear.

The effect of describing these interventions in such brief terms comes across as reductive, whereas the experience of actually being in the space is akin to a warm cocoon. It is these interventions that act subtly on the visitor's interaction and navigation of the exhibition space.

I say, ''space'' because ''OTHER [Otepoti Chinese]'' feels like more like an experience than an exhibition of artworks. In the muted, red-tinged light, Canton has provided a framework that encourages visitors to engage with the subjects - Chinese who live in Otepoti/Dunedin - on the subjects' terms, or as much as this is possible. Just who is ''other'' becomes fluid and malleable. 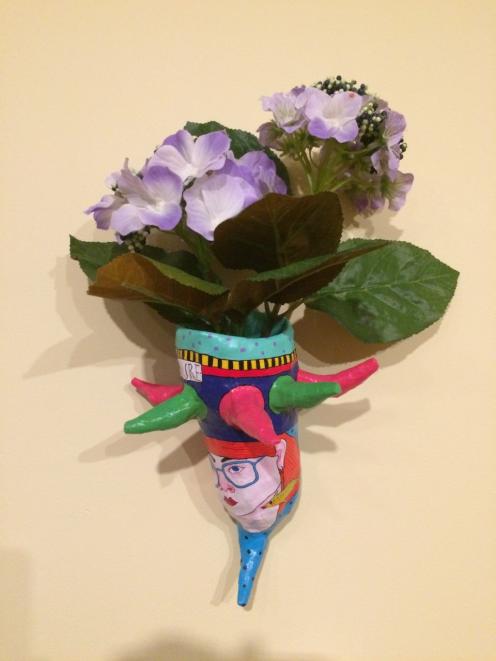 Dunedin Public Art Gallery's re-presentation of Nicola Jackson's original 1990 exhibition seems timely, as if the artist was futuristically engaging with issues such as gender and feminism, and foreshadowing ecological issues.

''Venus Fly Traps'' is a wall-based installation that comprises 17 papier-mache vases holding artificial flowers interspersed with 15 framed prints with a colourful linocut border. The interspersed vases and prints are swarmed with oversized depictions of flies.

Each papier-mache vase is variously conical or cone-like with or without prongs and elaborate aberrations, as if the vase was transitioning to plant or vine. Each unique vase is personified with a different bespectacled female face who is painted in bright colours in a caricatured style that is part portrait and part comic drawing.

Each female face is captioned with a one-word description such as ''Bait'' or ''Appeal''. In between each personified vase is a framed print in which a poetic description of a malady or disease associated with a human organ or body part assumes equal importance with the small black and white etching above.

The vases personified as female can be read as a comment on or critique of the conflation of woman with nature or woman as nature, while the juxtaposition of human organs (the prints) alongside the personified vases and artificial flowers can be interpreted as a prescient engagement with the contemporary idea or re-orientation of humankind as part of nature.

Perhaps the first thing to note about ''Ka paroro o haumumu: Coastal Flows / Coastal Incursions'' - as indeed the online and wall texts do - is that this exhibition is a collaborative project between mana whenua, researchers, institutions and the artist.

Although Alex Monteith is headlined as the lead artist, the project is the result of many people's labour. This iteration of the ongoing research project, which is based on a collection of taoka (treasures) excavated by archaeologist Peter Coutts between 1968-72 in the Fiordland area, comprises a four-channel video work and a walled, sealed-off area visible through a large window in which actual inventory work of archaeological findings takes place.

The video work maximises the potential for storytelling over the large four projection surfaces across one side of the gallery. Discussions of taoka that unfold in the first projection are brought to life in the other three projections by location shots or by museological detail of the taoka or its archival entry card.

The problematic politics of Pakeha researchers collecting and holding the taoka are undeniable, and given the degree of collaboration between Monteith and mana whenua I can only presume that the sealed museological space for real-time inventory is intended to trigger a measure of discomfort.