There has always been an ascetic perfection to John Parker's ceramic work. The sleek lines, monochromatic palette, and painstaking symmetry of each piece defies the notion of a handcrafted object where you would expect natural variation between each finished work.

There is a uniform, very geometric, very intentional precision to Parker's practice that creates the illusion of a glossily manufactured item. With stark white vessels juxtaposed against metallic gold, the effect is rather like moving from modernist minimalism to ancient Egyptian artefacts.

Parker excels in the execution of glaze and texture: the gold works seem to gleam from within, illuminating the meticulously even carving of lines into the surface, and the white vases appear all the more startlingly flawless for being stripped of colour.

However, the standout pieces of the exhibition are the grey-toned ''volcanic'' works. Interestingly, Parker's experimentation with glazing has created an effect here that is intensely organic.

At first glance, from a distance, it appears as if these bowls and vases have been carved literally from volcanic rock, the outer curves indented with aerated bubbles.

On close inspection, it's as if solid pieces of ceramic have reacted in the same way as adding bicarbonate of soda to a toffee mixture, sending the surface into a mass of foam, and it's fascinating, particularly when contrasted with the highly-finished smoothness of the other. 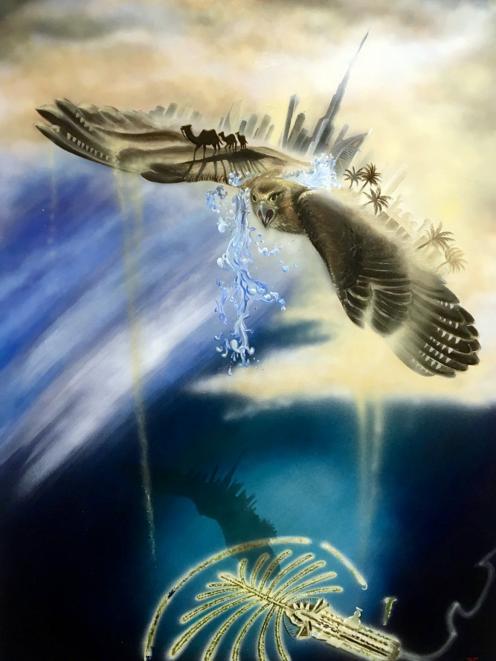 Tania Jack is an illustrator as well as a painter, with an eye for detail, who invests all of her works with a distinct warmth and charm. Even the larger landscapes give the sense of a storybook narrative, as if setting the scene for creatures real and fictional to carry out their personal journeys, tracing a path through iconic sites of the Lakes District: Millbrook, Lake Hayes, Thurlby Domain, Arrowtown.

The effect is even more conscious with the pieces invested with mythological allusions, such as Legend of Wakatipu the Sleeping Giant. With iconography woven into the composition - literally, in the case of ground and sky, which are braided like flax - the work speaks of the legends that are entwined with these lands.

The delicacy of Jack's brushstrokes is shown to best advantage in Keas McKinnon Pass, where the fan of bright colours in the birds' wings seems to glow against the encroaching cloud and mist that curls around the mountains.

Likewise, in Autumn Leaves, the use of contrasting darkness and earthen yellows and golds creates an impression so crisp that you almost hear the rustle and crackle of the fading leaves.

The more illustrative watercolours capturing snapshots of daily life and leisure, like Rainbow Trout and Lodge Arrow Kilwinning, are appealing, while the acrylic Legend of Palm Island Dubai takes an unexpected but intriguing nudge into surrealism. 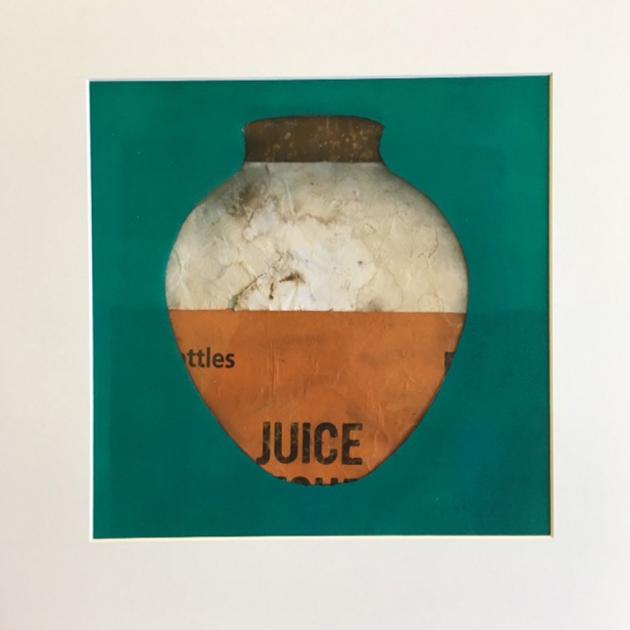 Ro Bradshaw takes the concept of recycling to another level with her new show ''Remains of the Day'', turning highway litter into high art. After collecting roadside refuse in Gibbston, Bradshaw sorts and cleans it, flattens the aluminium cans, and collages selected items with printed transparencies.

The resulting pieces are beautiful, framing two-dimensional vessels and crosses against solid backgrounds of black, teal and rich red.

The water-stained and marbled surface of the vase imagery lends the suggestion of aged ceramic or luxurious stone, situated against the printed words and discarded commercialism of cigarette packets and fast food packaging. The collection is a questioning examination into the effects of tourism and population growth on the natural environment.

There is something quite funereal about the choice of iconography, the crosses and urns associated with death rites, which is intriguing when the nature of the medium is considered - the titular ''remains'' of people's everyday lives, discarded and no longer thought about, but lingering in the environment.

The pieces of rubbish are a trail of markers people leave in their wake, providing dozens of small clues about the life they came from - what the person ate, drank, smoked, read, wore, danced to - and those markers could remain in physical existence for longer than the human being themselves.