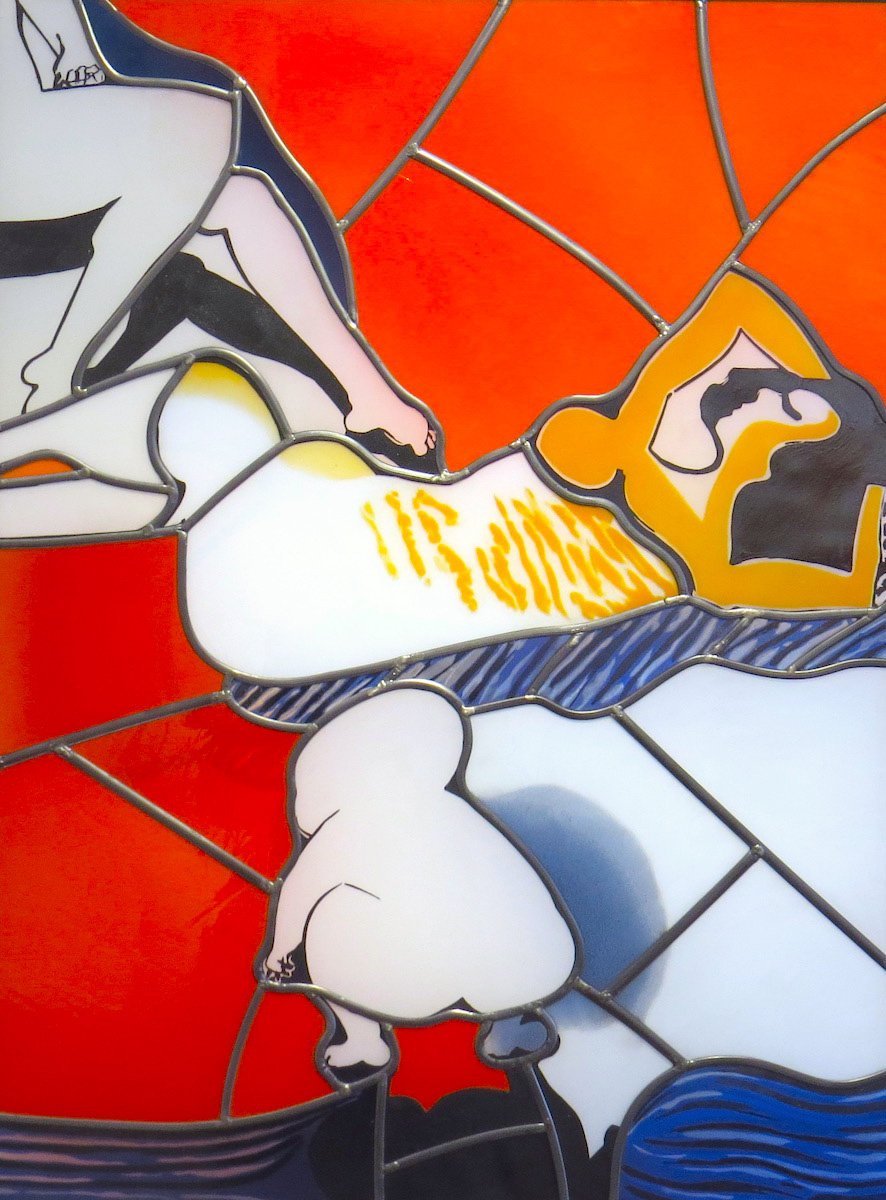 The late Pat Hanly was a major late 20th-century New Zealand artist. His work, rooted in a modernist tradition, dealt with what it means to be human, expressed allegorically in bold fields of well-delineated colour. He can be considered one of, if not the, leading user of light and colour within the genre in New Zealand, and it is no surprise that his work lends itself perfectly to stained and painted glass, a medium used frequently by the artist himself.

The same medium has also been used to re-create original Hanly works by high quality art glass-smiths The Glassworks (Suzanne Johnson and Ben Hanly), who, initially alongside the artist, have produced notable glass works of Hanly paintings. Milford’s current exhibition features six glass panels, alongside two printed works by Hanly. As such, the exhibition could be said to be collaborative, though the hand behind the art is clearly that of Hanly himself.

The works do not disappoint. The strength of line in the monoprint ‘‘The Adventurer’’ and vivid colours of the untitled screenprint spring to life in the setting of glass and lead. Images such as ‘‘Bride and Groom Accidents’’ glow in rich primary tones, and in ‘‘Lunar Love’’, the exhibition’s star, the simplified lines and bold colours captivate with a warm, hypnotic humanity. 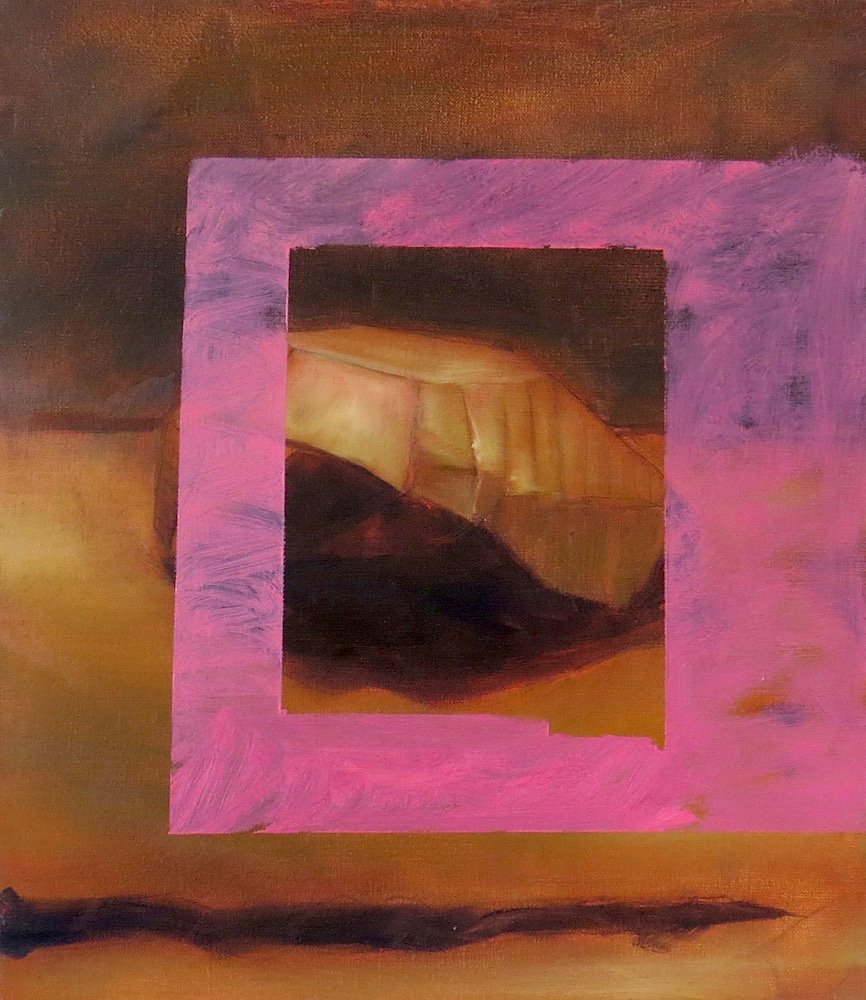 Michael Greaves’ ‘‘Selected Works 2013-2017’’ takes us on a philosophical journey into the heart of our understanding of objects.

The abstract and semi-abstract works are deliberately designed to question the relationship between real and symbolic, solidity and image. Greaves sees the process of viewing a painting as that of perceiving a representation of the artist’s own perception of the object. As such, we are at more than one remove from reality, and the process of recognition becomes ambiguous, guided more by what we think we are meant to see than by what we actually observe. Three dimensions become two, and two become merely a thought process.

The forms are effectively and expertly painted, but we are being asked to examine them without the preconceptions of the titles or their apparent nature. ‘‘Raft’’, one of the few works not simply titled as ‘‘Object study’’ or similar, appears as a painting of a folded cloth or card, yet the artist is telling us that the nature of the object is of less importance than our observation of the work. The images become portraits of nothing and simultaneously portraits of the viewer’s own perceptions. While several of the works are attractive and others are challenging, their physical nature is just half of the conceptual process which the artist is demanding we make. 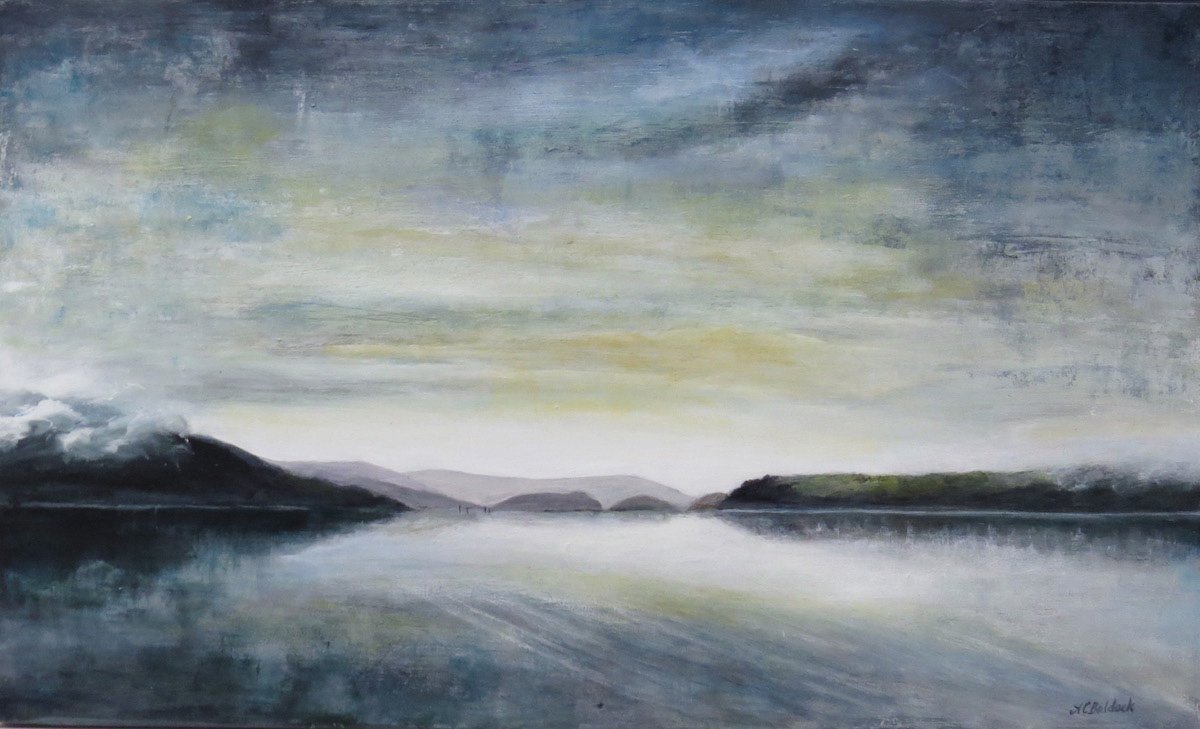 Anne Baldock has created a series of moody landscapes in her latest exhibition, ‘‘Sea Change’’.

With one exception (a view of the coast from Brighton) all of the works depict the rolling contours of the land around the edge of Otago Harbour. The harbour itself, and the skies above it, are clearly the subjects of the works. Time and again, the eyes are drawn to the dark, gritty skies that hang ominously over the land, and the washes of reflection below.

Often the surrounding hills become little more than a framing device, focusing the attention firmly on the shifting sky and water. The artist has used a reduced palette of greens, blues, and greys, again concentrating attention on form and shade over hue.

This is not to say that the hills are anonymous. In works such as ‘‘Bronze Ripple’’ and ‘‘Harbour Guardian’’, they are imbued with strong, recognisable personality, and in the magnificent ‘‘Winter Dreaming’’ they emerge sunlit from beneath a cold wrap of low cloud.

In this painting, the artist moves towards softer brushwork, the colours melting subtly into one another. It is perhaps significant, however, that when the images become more painterly, as in ‘‘Discovery’’, the hills recede into insubstantial shapes, and the textures of water and air become paramount.