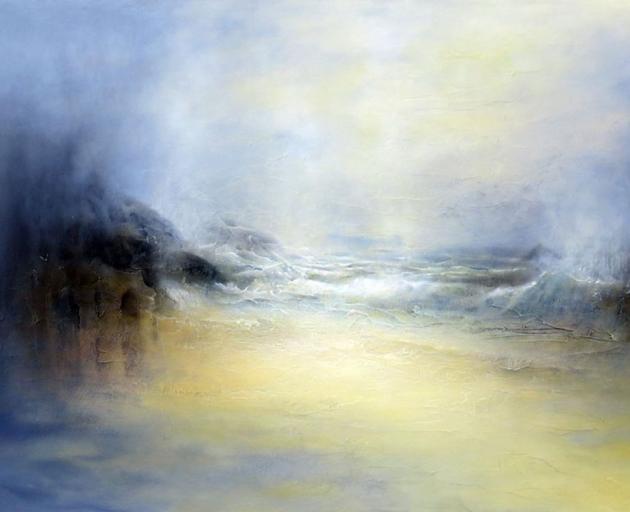 ''Door to the Ocean'', Steev Peyroux and Olav Nielsen (The Artist's Room)

A joint exhibition by Steev Peyroux and Olav Nielsen is always worthwhile.

Both these Dunedin artists have consistently produced strong work over the past few years, and it has been interesting to see how their art has changed and developed.

Some enigmatic, dreamlike elements remain, such as the ceaseless flows of water, but they are now no longer the central elements of the work.

The rich antique tones of deep crimson and sepia-tinged amber are also still present, but have been joined by lush blues and magentas, and the villas which were initially haunted and empty are now becoming populated.

As Nielsen's work approaches from its dreams, so Steev Peyroux's limpid ocean scenes drift into them.

His paintings, created on brutally prepared board which becomes marked by an irregular surface texture, are fumy, wispy visions of a gossamer coast.

The influence of artists such as J.M.W. Turner is readily apparent, and Peyroux has mastered the skill - in the classic description of that great master - of painting with light.

Peyroux has effectively produced vortices of air through which the rocks and ocean glisten tantalisingly. 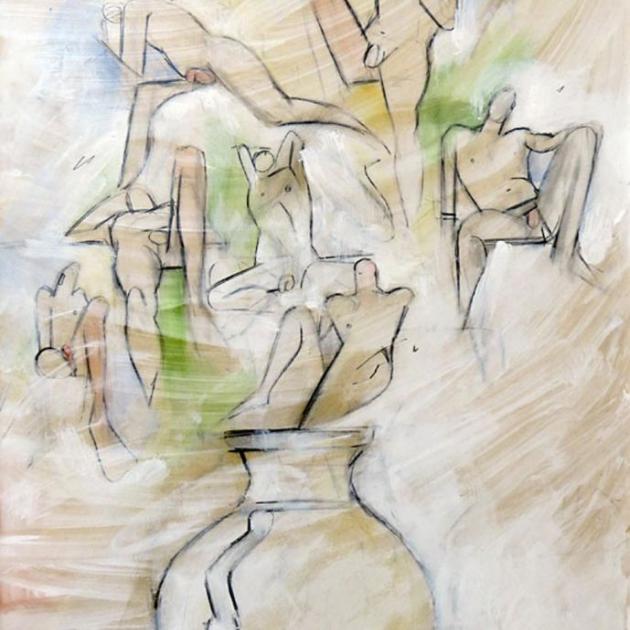 “Vase with Broken Handle of Men”, by John Z. Robinson

THE majority of John Z. Robinson's previous exhibitions of paintings have been either dark block works of playful text or bright, heavily worked landscapes and portraits.

In his current exhibition we see another side of this multitalented artist (whose work also frequently extends to jewellery), with a series of mixed-media ''vases'' of life-drawn male nudes largely leached of colour and presented as if they were still lifes rather than portraits.

The exhibition, though in many ways no surprise, is a revelation when compared with the bright bursts of expressionist colours with which Robinson's paintings are often associated.

Here, there are mere hints of primary hues against a background which is itself simply a thin wash of white over bare board.

The angular multiple body forms create compositions where repetition and structure become the primary feature, creating ''fields'' of nudes, presented in a way which is simultaneously dispassionate and keenly sexually aware.

The symbolic use of vases or similar containers in each picture draws focus to the fact we are looking at the nude human form as a bouquet, with all that implies.

The works are well-wrought, and are drawn and painted with a strong confidence which belies the flower-like delicacy of the images. 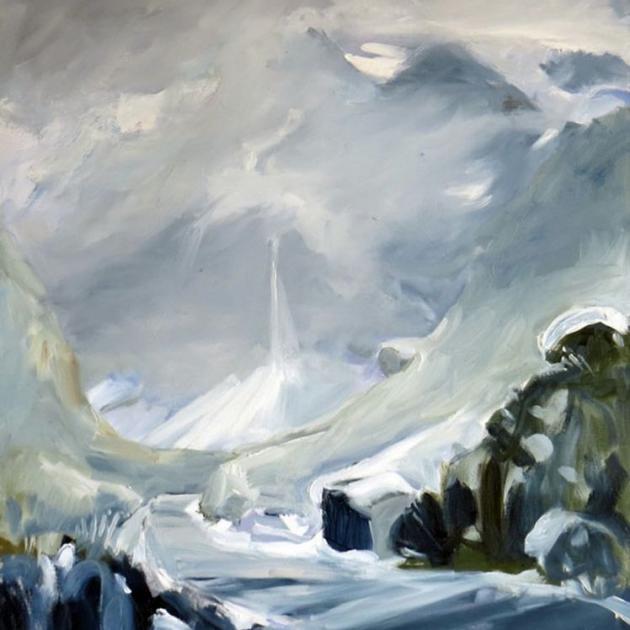 Galleries tend to come and go with a fair degree of rapidity, so for a gallery - especially a small, family-run gallery - to celebrate 20 years is a major achievement.

This milestone has recently been reached by Bellamys Gallery, at Macandrew Bay, and the Bellamys have put on a major group show featuring five family artists to celebrate.

Not surprisingly, it is works by Pauline Bellamy which predominate. Pauline's landscapes are an excellent group mainly of oil studies of the Fiordland landscape in deep watery blues and greens.

One surprising work gives the Milford foreshore an almost Australian feel with its bold strokes of tan and ochre.

Answering these Fiordland images are a series of strong monoprints by Manu Berry, one of which exactly echoes Pauline's image of the Hollyford road.

Max Bellamy's addition to the exhibition is a group of three moody photographic studies and a fine, hypnotic video loop featuring the iridescent play of oil and water.

The exhibition is completed by one large work by Emma Chalmers, its monochromatic gouache waves somehow managing to simultaneously provide a calming and menacing effect.