Kushana Bush, 2011 Frances Hodgkins Fellow at Otago University spent last year digesting the experiences of a pilgrimage to Europe the previous year. Charmian Smith talks to her about her work and her upcoming exhibition. 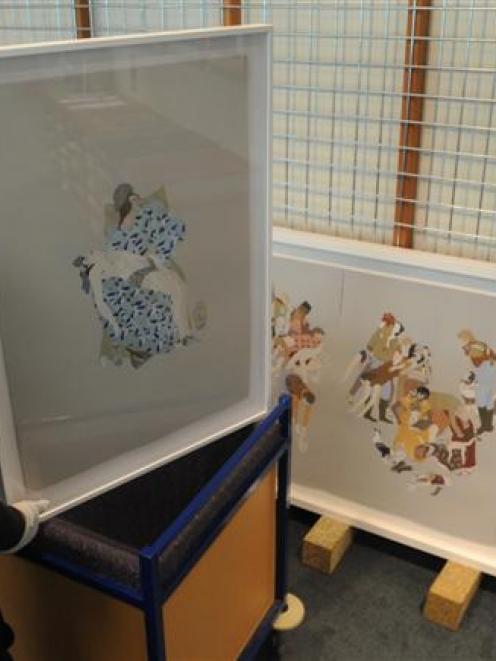 Pictorial collections curator Natalie Poland displays one of Kushana Bush's works ahead of her exhibition at the Hocken Library. Photo by Peter McIntosh.
The best thing about being an artist is that becoming obsessed about things is part of the job, according to Kushana Bush.

Her year as 2011 Frances Hodgkins Fellow at the University of Otago was an opportunity to become obsessed about primitive Italian painting, Stanley Spencer and other things, she says.

Just before the fellowship started she made a long-planned pilgrimage to Europe to see Giotto's work in the Arena chapel in Padua, Italy and Indian and Persian miniatures in the Victoria and Albert Museum in London, as well as to visit her extended family.

"I knew so well from books what I was going to see, that seeing it in flesh felt like the conclusion of that. For me, it was a kind of confirmation and also that extra bit you get from standing in front of something where your stomach drops and your eyes widen and your heart starts pounding," she says.

"By the end of it you felt like you'd eaten too much, you were full and needed to digest, so I suppose the fellowship year was a year of digesting that information. It was like going from the book to the real thing and it had been a dream for a long time."

She has spent the year painting 31 "miniatures" for her exhibition, "All things to all men" which opens at the Hocken Gallery on Saturday.

Her works may not be as small as might be expected, but they were inspired by Indian miniatures and Japanese prints, and share some of the techniques (such as gouache as the medium), great attention to detail, and depiction of figures sometimes in intimate or sexual scenes, and use of pattern, as well as a certain flatness or lack of perspective, she says.

As a child growing up in Dunedin, Bush (28) was surrounded by oriental art at home. Her father had been to art school in the UK and spent time in India before coming to Dunedin. He collected Indian miniatures and Japanese prints.

"They were figurative, to start with, but there was also a kind of undercurrent or overtly sexual content to both those genres. I think growing up with that skewed my perception of art and what was normal.

"Initially I was interested in painting couples in intimate scenes, a theme I had been interested in from art school. One of the most obvious examples wasn't in Western art but in Indian miniatures.

"I studied how they worked and how they could get away with such images and the medium [gouache] was part of that. It's a good medium for detail and lots of beautiful colours and flatness and in some lights it shimmers. I was never fond of oil painting, which I found quite physical."

Landscapes also never interested her. However, she was fascinated by the sexual imagery in Indian miniatures and the often gruesome images in illuminated manuscripts, their Western equivalent.

"I suppose I was interested in taboos and tiptoeing around the edges of that without doing it for shock's sake. Miniature is another way of making something permissible that otherwise was taboo," she says.

She paints as a way of asking a question to which she may not know the answers, but it is an addiction to try to understand it, she says.

After feasting on Giotto's works in Italy, she felt she had been depriving herself of painting such beautiful things as clothing, so her figures, instead of being mostly nude, are now clothed in intricate patterns and colours.

"I'd always been interested in making works that had a rhythmic or lyrical quality, and fabric is a really interesting way of doing that, and it's quite an expressive tool as well. It can be twisted in a way that says something about the way a person is feeling."

One of the new works is a Pieta, traditionally an image of the Virgin Mary holding the dead Christ in her lap.

"Natalie [Poland, curator of pictorial collections at the Hocken Library] talks about it in the essay in the catalogue as being like a Michelangelo La Pieta but he's wearing a Japanese kimono."

Whether I even intended those things is another thing, but she talks about the melding of cultures or cultural influences and the historical and contemporary as well.

"A lot of what I do is intuitive. It comes from a lot of looking, a lot of reading, a lot of painting and the story sort of forms from that.

"But most of the time when something's written about it, it's the writer's own intuitive reading of the work and it's often on the money without me having to say anything - we are talking Western curators. In another country it may be completely different."

She discovered cultural differences on a two-month residency in Korea in 2009.

"In Korea, my work didn't have the same reaction. That was interesting. I thought perhaps humour could transcend those language boundaries and visually I could communicate the same thing without the words. But now, looking back on it, I found even the way our art is communicated is culturally framed."

In her exhibitions, Bush aims to communicate with all types of people rather than an art audience.

"That's what art should be for me, not an exclusive world, so I'm interested in finding ways to communicate with as many people as possible.

"If that means I use the medium of painting, and I use pattern as well and I can lure people in with detail and the wow factor of `how did one person make all of this', that's just what I have to do to create a wider audience," she says.

Bush first considered becoming an artist when she was about 16 and saw an exhibition by then Frances Hodgkins Fellow, Seraphine Pick.

"Here I was standing in front of an artist who worked figuratively. She was female and she was also living in Dunedin at the time.

"A lot of work I'd looked at before this had been male and from another era as well, so I was kind of surprised to find there was an artist who was able to survive as an artist in Dunedin."

She studied at Otago Polytechnic's Dunedin School of Art, and after graduating, became a lecturer, which forced her to articulate what had until then been intuitive, she says.

However, after a few years teaching all day and painting at night and at weekends, and trying to give 100% to both, she decided to become a full-time artist at the end of 2008.

"It was a hard decision to actually make, going from having a wage to trying to make your own way.

"With all the bravado I'd had as a student at high school, thinking I'm going to be an artist and it doesn't matter if I'm poor, by the time you are in yourmid-20s the reality of that - and trying to get the rent together every week, that was a big step."

There was also an adjustment to the loneliness of not having contact with people, and trying to find some balance in her life, something she still hasn't managed, she says.

"When you live and breathe your job, and you are self-employed and when you are an artist, you can't switch off that easily."

"All things to all men", an exhibition of 31 recent gouaches by Kushana Bush, 2011 Frances Hodgkins Fellow, opens at the Hocken Gallery on Saturday. It will tour to the Pah Homestead Wallace Arts Centre in Auckland from April to July and to other venues after that.