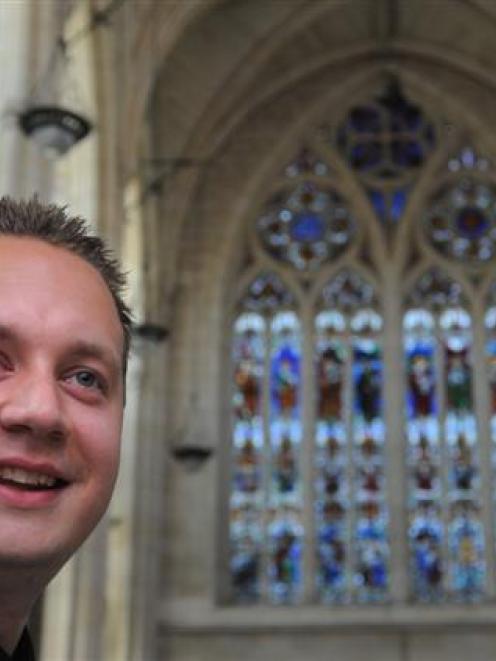 "We have a lot of international quality in our choir currently and I'd like to make sure our music quality is at the absolute forefront of New Zealand's cathedral music programmes," he said.

He is also delighted by the quality of the cathedral organ, a four-manual organ built by the British firm Henry Willis in 1919 and rebuilt by the South Island Organ Company in Timaru in 1972.

Chittenden (28), who arrived in Dunedin a couple of months ago to take up the position at the cathedral, has been surrounded by church music all his life.

His father was a Church of England parish priest in the south of England and as a boy he was encouraged to sing in choirs and play the organ. When he was 7 he had a choral scholarship to sing in the Rochester Cathedral choir in Kent.

He chose to study at the University of Aberdeen in northern Scotland because he could combine an organ scholarship at the King's College Chapel at the university and playing the organ at the cathedral, where he was appointed assistant organist at the age of 18; he claims to have been the youngest cathedral organist in the country at the time.

He is still working on a "very part-time" PhD on Scandinavian musicology, he says Subsequently he taught piano, organ and voice, and says he has probably taught a generation of students who are now teaching in Scottish secondary schools.

A stint of 14 months as assistant organist at Hartford Cathedral in Connecticut, US, gave him the opportunity to work with its director of music, Kevin Jones, whom he describes as "one of the most outstanding musicians and a sought-after vocal coach in Manhattan."

"I originally thought that spending a year or two in a job there would be a platform to a bigger church or cathedral job in the USA and I looked at one or two jobs."

But a holiday in Australia and New Zealand about a year ago turned Chittenden's thoughts to this part of the world and he started looking for a cathedral position here.

Having been in the job at St Paul's a couple of months he is enthusiastically planning to expand the cathedral's musical activities next year. He wants to expand the 22-strong choir which sings three times a week - on Sundays at the 10am Eucharist and at evensong, and at a 6pm choral evensong on Thursdays.

Chittenden plans to form several new choirs - one for boys, one for girls, a teenage choir, and an auxilliary choir open to experienced singers sympathetic to church music which would sing during January when the cathedral choir has its annual break.

He also has plans for monthly concerts and recitals, lunchtime organ music and other public events. Tomorrow evening he will be giving a second organ recital of Christmas music, playing for 45 minutes and asking people to put some of their change in the collection box.

He puts the music for upcoming services on the cathedral website, www.stpauls.net.nz.

Besides organising, rehearsing, conducting and performing music at St Paul's, Chittenden has been appointed Fleming Galway Organ Fellow at Knox College, which means he will play the organ in the college chapel on Sunday afternoons in-between the two cathedral services.

"It will be a diverse Sunday because the director of the choral scholars, Richard Madden, sings in the choir here, so we are reversing roles. It will be nice for me to sit down and just have my fingers on the keyboard and not have to do printouts or orders of services," he said.

Chittenden loves the special character of church music written for the big acoustic of a stone church.

"Some of these huge soaring melodic lines create a sound world that can't be replicated in any other type of music," he says.

"Cathedral music is my focus and what I really enjoy. I'm very interested in the broad spectrum of cathedral choir music, ranging from plainchant and renaissance through to contemporary cutting edge composition."

The only area of church music he doesn't feel qualified to work in is praise and workshop songs, as he doesn't have skills with guitars or music groups who do that sort of thing, he said.

However, he is interested in the diversity of other traditions of classical religious music such as the big baroque masses sung in churches in central Europe, and the Lutheran tradition, which stems from his being half Swedish and having spent a lot of time with his mother's family in Sweden.

He still gives concerts there from time to time.

The music for the cathedral's choral services is selected according to the church calendar. Advent, the four weeks before Christmas, is a time of preparation and the music is more restrained than at some other times during the year, he says.

For this year's main Christmas services at St Paul's, the midnight eucharist at 11pm on December 24 and the 10am Eucharist on Christmas Day, the choir will sing Missa O Magnum Mysterium by 16th century Spanish composer Tomas Luis de Victoria. The midnight service will be preceded by the choir singing carols at 10.30pm.