Pippi Miller, Lucinda King and Tess Wing have spent hundreds of hours sewing, stitching and drawing to make their visions come to life.

Tess Wing has sacrificed more than 40 stuffed animals to create her eclectic collection of sculptures.

The Dunedin student, who has very sensitive hands, is interested in the tactile nature of textiles.

"Touch is a big thing for me." 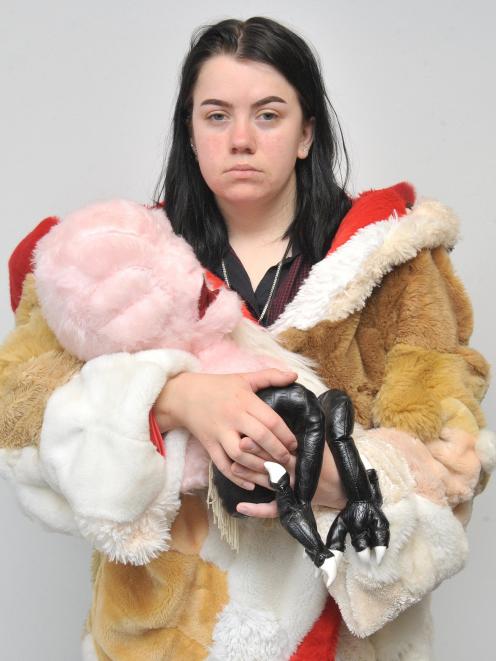 Tess Wing tries on the heavy coat made of stuffed animals while holding her ‘‘foetus’’ she created the same way.

As someone who loved drawing and art it was a toss up between art school and studying art history, but art school won out, she says.

She discovered textiles in her first year and moved into sculpture.

"I’m really interested in the sculptural aspect of textiles."

For her final year project, she went in search of as many stuffed animals as she could find and proceeded to take them all apart.

She put them back together in very different ways — creating a new species of "animals", houses and lamps.

"It’s all stuff that is very tactile. I hand sewed a lot of it as the shapes are patchwork and some are rounded. I’ve spend a lot of time sewing, it’s very time consuming."

The houses and lamps feature ceramic teeth, which Wing also made and her "animals", including a pink "foetus" — which squeaks — have ceramic clawed feet. 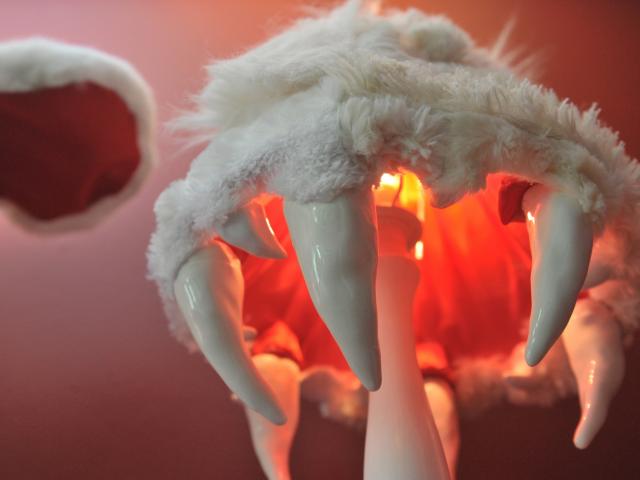 Tess Wing created hundreds of ceramic teeth for her creations.

Her work is divided into two scenes one referencing how vultures abandon their young during food shortages if they cannot feed them, hence the creation of the "foetus".

"It’s about how people focus on themselves more than others."

Wing’s interest in animals and birds came from father, who is a marine biologist.

"Animals have been a big thing for me my entire life."

She sees animal traits in how human’s behave.

"At the end of the day, we are all very primal. So this focuses on two key aspects of survival — fight and flight."

The lamps, with their ceramic teeth, represent the fight aspect, the "eat or be eaten".

"They’re a gesture towards trophy hunting and incorporating domestic objects."

Her other "scene" includes a figure swathed with a long, heavy, red-lined coat made from the "fur" of stuffed animals. She made a version of the coat last year, but made a bigger version for this year.

"It’s a transitional ‘animal’ just like we transition to adulthood."

A long-held wish to create a storybook has come true for Dunedin student Pippi Miller.

Miller has loved drawing and art since intermediate, but it was her love of acting she pursued at university.

"I had different dreams then."

When she discovered it was not her thing, she changed direction and studied English.

However, in the back of her mind she always wanted to make a storybook. 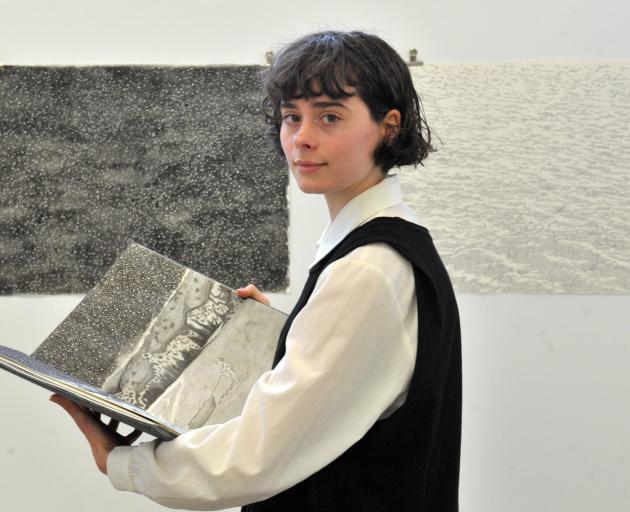 Pippi Miller loved having a year to create a storybook.

"I’ve always liked art and books, so I wanted to combine them both. I really like picture books and illustration."

When she finished her English degree, she decided to make her wish come true and enrolled in Dunedin Art School’s graduate diploma course.

"I’ve been thinking about it for five years."

Her aim was to create a one-off children’s storybook called Headland, featuring a boy’s journey through darkened landscapes — both physical and mental — as he searches for a fallen star, finds it and brings it home.

"I wanted to incorporate mental health, different states of dislocation and anxiety, but putting it in a child’s context." 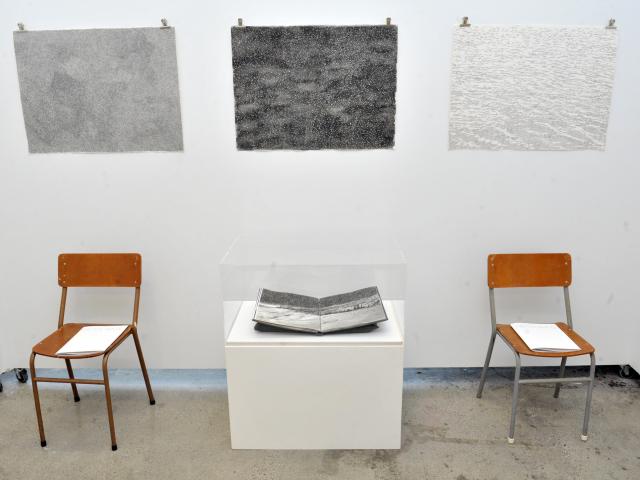 Pippi Miller’s exhibition of her graduate diploma work at SITE.

She created the detailed drawings on watercolour paper in the book using a dip pen and ink for the line drawing combined with watercolours for the coloured features.

It took four months to make the drawings themselves but longer when the planning and developing of the images is taken into consideration.

"The figure drawing took a long time as it’s harder."

Miller covered and bound the book herself in the traditional way, using found materials.

It is a process she really enjoys and hopes to do again.

"I learnt a lot and figured out a lot, so I’d like to take what I’ve learnt and apply it to a different book."

She also created three other larger works, using imagery from the book for the exhibition. One took four weeks, of drawing all day, to create.

"I wanted to experiment with creating art separate from the book."

"It was arduous. No-one saw me for a while."

The embroidery is one aspect of King’s work, which also includes detailed painted images and a soundtrack to "consider the uncertainty of the anthropogenic age and the complex systematic issues of dominant culture that deeply connect to climate change".

"It’s primarily concerned with environmental degradation. I feel that the words ‘climate change’ hide the fact that it’s the result of so many layers of systems of our dominant culture. "

She researched Medieval textiles and the Danse Macabre (Dance of Death) wall friezes of the 14th-16th centuries in designing the three panels on the large work.

"I’ve used that red embroidery as a theme in my work to show the power of the dominant culture. I’m also anthropomorphising the elements in the work: the skeletons, the sound it’s a way for me to deal with climate change in my work. It’s my way of understanding it.

"It’s such a mournful topic. Environmental grief is something at some level everyone feels at some stage as we are so interconnected with the planet."

King painted the draft images first before translating the ideas into embroidery and painting on the satin.

"I had a detailed plan in my head and for four months I worked nearly every day for long hours. I was a bit sore, but I’ve come right."

Then she looked to bring her background as an electronic musician into play, translating the images and conceptual work into sound.

Whenever she went out she took a dictaphone with her to record anything that took her interest.

She spent numerous hours recording and then added field recordings of wild fire and natural disasters to create an 8-minute loop, which features 25 layers.

"It’s dramatic, it heightens its impact. I’ve probably got an album worth of songs from this project. This is the one that felt right for the work."

She is presenting the tapestry in a fully black room with the music loop playing in the background.

"Everything floating in this big expanse, ruminating on these big ideas of the future and uncertainty. It’s how I saw it in my head."

King has returned to art school after about 10 years to finish her degree, curious as to how she could combine her love of music and art and see how her practice has changed in that time.

"Music is a huge part of my life, but it is cool to finish my degree. I’ll continue to do my art."