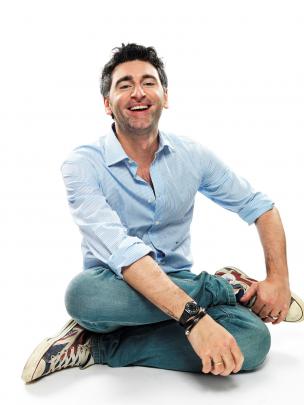 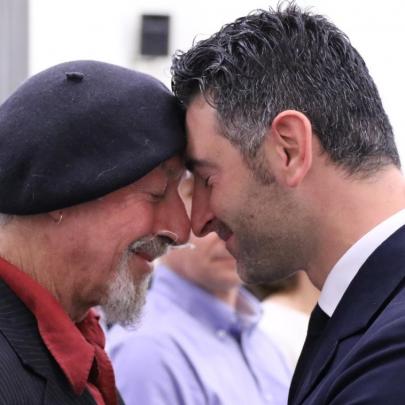 Francesco Ventriglia (right) is welcomed by Sir Jon Trimmer at a private powhiri the RNZB held to welcome its new artistic director in December last year. Photo by Evan Li.

When he was about 4, Francesco Ventriglia saw a ballet on television and started to dance in front of the set. ''I don't know why. Maybe when I arrived in the world my body knew I was made to dance,'' the new artistic director of the Royal New Zealand Ballet said in a phone interview from Wellington. He joined the company late last year.

''I started to ask 'I want to dance, I want to dance' but nobody answered me. Nobody knew a dance school. Nobody listened to me,'' he said.

He came from a large, traditional family in a small town in the south of Italy and there were no dance schools nearby. None of his family had been in a theatre until he invited them to see one of his shows. However, after he spent a month in hospital, his family were so pleased he recovered, they asked him what he would like for a present.

''My answer was 'I want to become a ballet dancer'. I don't know why, I was 8 years old. They said `OK, we can try, we are looking for a school', and from that moment my life was completely dedicated to dance,'' he said.

''I understood my life immediately. I have a big love and I have to follow this love even if it's very hard. Ballet work is very hard and to become a ballet dancer is very hard.''

At 11, he left his family in the south and went to Milan to the Ballet School of La Scala. Immediately after graduating he joined the La Scala ballet company and a year later he was dancing solo roles, he said.

He made his debut as a soloist in William Forsythe's In the Middle, Somewhat Elevated in 1998 and the following year was chosen by Natalia Makarova to dance the demanding role of the Bronze Idol in her La Bayadere.

He soon ventured into choreography as well, and has created works for the Bolshoi Ballet in Moscow and the Ballet du Grand Theatre in Geneva. At 32, he was appointed director of MaggioDanza in Florence.

That was when he stopped dancing because he believed his focus should be on the dancers and he needed to provide strong guidance for them.

He says he doesn't miss dancing because he discovered a new part of himself, another life and a completely different job that he loves too.

''Everything happened very early in my career but I felt ready. My life is for dance and my country is where I have a theatre to work. That is enough. I am very lucky. I have a beautiful life. I am a lucky man,'' he enthused.

He considers himself lucky to have been given the opportunity to come to New Zealand and without a partner or family to take into account, the decision was easy.

Like everyone in Europe, he knew the RNZB by reputation and when he came to New Zealand for an interview in June last year, he met the dancers and taught a class, he said.

''It was a very good moment because I saw in their eyes the passion, the hunger. This light I saw in their eyes in June I can now see on stage. The artists of the RNZB are very hungry. They want to push themselves. They are young and talented and for me that is very powerful to know.''

He likens it to driving a Ferrari: it's such a superb car it's easy to make it go fast.

''That's my feeling. I can go really fast with this company in my hands because there are a lot of high professionals, because I have strong dancers and at the same time I work with a very strong team working in marketing and media.''

When he arrived in November he was moved by a powhiri the company had arranged for his welcome.

''I will never forget it in my life. It was a deep emotional moment. I tell the dancers for me they are the supporters of beauty in the world and in this moment particularly, the world needs to have beauty because people fight and [there are] economic crises and war. It's a very hard moment for people.''

''That is our job. That is the reason why the theatre is necessary: to save the beauty and give beauty to the people.''