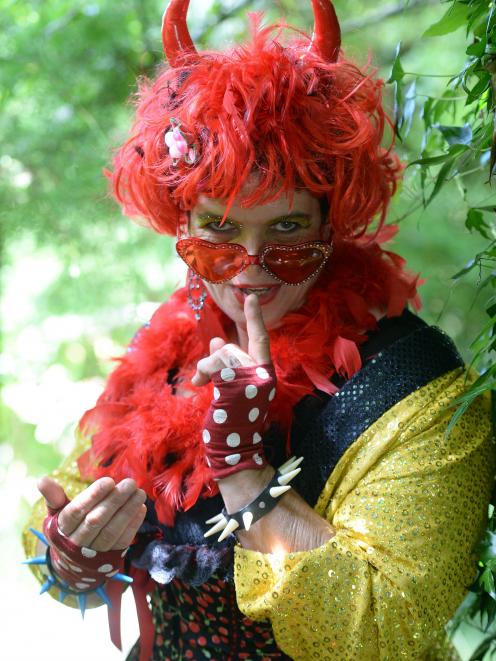 Mandy Mayhem, who is among the largely Waitati-based cast of Frankensplurta, says there are surprises aplenty in store for audiences. PHOTO: LINDA ROBERTSON
The Rocky Horror Show finally has a prequel, Frankensplurta, which premieres at the Dunedin Fringe Festival, writes Bruce Munro.

Lovers of the Rocky Horror Show, here's a time-warping invitation not to miss.

Forty-five years after New Zealander Richard O'Brien brought his gender-bending musical fantasy to life, the world premiere of a locally written prequel to the hit show and film will be staged in Dunedin next month.

Frankensplurta, the Rocky Horror back-story, has been written by English and media studies teacher Sandra Muller and is being produced by former Greens co-leader Metiria Turei, both of Waitati, north of the city.

They, along with a score of Waitati's acting and musical talent, plus a couple of imports, are inviting Fringe and Rocky fans to ``travel through the velvet darkness of the blackest night'' to uncover secrets about the lives of Janet, Brad, Frank, Magenta ... from before anyone had first noticed there was ``a light, over at the Frankenstein place''.

``It's in the spirit of Rocky Horror and ... it will be visually amazing,'' Muller says.

The idea was first mooted a few years ago.

``We were talking during some sort of progressive dinner party, and Metiria said how cool it would be to have a progressive performance.''

The notion was revisited regularly until last year when Turei suggested it happen in time for this year's Fringe Festival.

Muller, who has been involved in the Fringe for several years including two years as a judge, took on the job of writing the script.

``It's basically a prequel; our own take on it. So, people may find out something about how the characters came to be in the Rocky Horror Show.''

In 1981, a spin-off sequel film to the 1973 stage show and the 1975 film the Rocky Horror Picture Show was produced. Titled Shock Treatment it was as badly received by critics as its progenitor, but failed to reach the original's later cult status.

As far as Muller knows, a prequel has never been attempted.

Writing took several months. At times it was challenging despite her love of the craft.

``It's quite hard, when the story is so familiar, to find something else to say to make the characters different and have some sort of development.''

But she is pleased with the result.

``People will be shocked. It could even change their whole understanding of the folklore surrounding the show.''

Taking care of the melodic side of things is Turei, who is acting as musical director as well as a member of Kill Martha, the Waitati-based, five-piece band that is performing live during the show.

Final details are still being nailed down, Turei says.

``These kinds of projects are constantly evolving.

``People can expect an eclectic mix of musical forms and songs. The performance is of course a mystery for our audience to discover. What they can be assured of, is that they will have a wild and exhilarating experience full of music, laughter, fishnets and feasting.''

Muller does not want to divulge too much, except to say that those coming to the performances should be dressed warmly and comfortably. She hints that, like the progressive dinner at which Frankensplurta was born, the show may be spread over more than one location.

Attendees are encouraged to dress up in Rocky Horror-esque costume.

The show, aimed at a mature audience, will be interactive but not compulsorily so, she says.

The Waitati community has played a big part in the production, including the name of the show itself.

``We came up with Frankensplurta by doing a poetic jam session to find a suitable name.

``It's nice living in a community where people just come together. We have random people turning up and saying things like `I've got an old corset you can use'.

``It's a really nice event in terms of lifting the community spirit and drawing on it. There are so many creative people out here and everyone is so generous with their time and support.''

Frankensplurta has seven main characters and a supporting cast of 10, plus the band.

Frankensplurta will be performed three times during the Fringe, on the evenings of Thursday, Friday and Saturday, March 15 to 17.

Given that only 30 people can attend each performance, the show's own publicity material almost guarantees Frankensplurta will sell out quicker than you can tuck your knees in tight.

``With gay abandon,'' it states, ``become a player in a horror love story of aliens, betrayal and death. And hot groins. There's gotta be hot groins.''

The show
•Frankensplurta plays in Waitati as part of the Dunedin Fringe Festival, Thursday, Friday and Saturday, March 15 to 17.