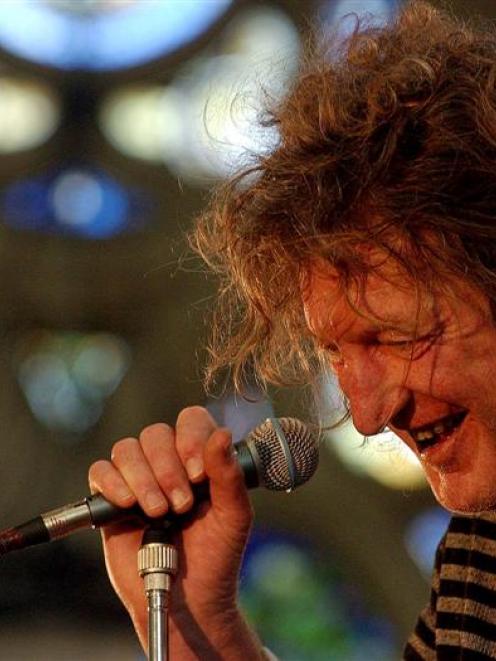 Sam Hunt reads poetry in St Paul's Cathedral on a previous visit. Photo by Craig Baxter.
He's the poet laureate of the proletariat who has been described as the "Kiwi Jack Kerouac". Nigel Benson meets Sam Hunt.

You've got to love a poet who calls his work "songs for the tone deaf".

But then, Sam Hunt is no ordinary poet. And he's no ordinary man, even if he has carved out a career portraying one.

Hunt has probably done more than anyone to popularise poetry in New Zealand.

"Do you want a couple of poems?" he asks while we're chatting. "I'll send you some."

Anyone who gives away poems like home baking is OK by me. That's the thing about Hunt - he's made poetry accessible and cool.

Every poem benefits from being read aloud by its author.

But when Hunt reads a poem, it becomes a flame-tongued beast roaring from a cave entrance on a craggy mountain top.

The 61-year-old returns to Dunedin next month to perform at St Paul's Cathedral in the Otago Festival of the Arts.

"I'm really looking forward to doing the show in that church again, with all those wonderful old stained-glass windows," he says.

Hunt has long ties with Dunedin. He lived in a crib on Otago Peninsula, near the Harwood turn-off, when he was the 1975 University of Otago Burns Fellow.

A painting of him leaning against the Portobello Hotel in 1978, by Robin White, is in the Dunedin Public Art Gallery permanent collection.

For the past six years, Hunt has lived at Kaipara Harbour, near Paparoa.

"To live five gunshots from humanity suits me well," he says.

He was last here for the OpenArts "People and Places of the Peninsula" exhibition last October.

"I stayed at the Kaimata Retreat at Cape Saunders. It was beautiful down there.

"One day I was there I saw a big shark coming up the [Papanui Inlet] canal. It was huge. I'm sure it was a white pointer."

People who have lived at Papanui Inlet for up to 30 years (who include my parents) say they have never seen a shark in the narrow canal.

But that's Sam Hunt - never let the facts get in the way of a good story. As he says, "Tell the story. Tell it true. Charm it crazy."

Hunt has just published his first collection of poetry in more than a decade, Doubtless.

"It's a collection of new and selected poems," he says.

"I got a computer a little while ago and it's been absolutely bloody marvellous.

"I was perfectly happy with my carrier pigeons and smoke screens, but I succumbed about four months ago and bought a brand-new laptop with a white screen. My 10-year-old's been helping me work it all out."

The title was inspired by the throwaway line "Doubtless a bay", uttered by Captain Cook when he was navigating the Karikari Peninsula in Northland in 1796.

"I've been writing a lot of new poems. A lot of runes. I'm bringing my son, Alf, down to Dunedin for a week and I've just recently written some runes for him for his 11th birthday.

Tom Hunt now works as a journalist at the Nelson Mail.

Hunt had verse in his veins from a young age. He was surrounded by performance and prose growing up in Castor Bay, Auckland, where his mother, father and grandfather all regularly recited poetry.

His father was a "somewhat eccentric barrister" who had come from a family of actors, troupers and musicians.

"When I was young and poems started happening for me, I always saw them as a gift. I never asked for them.

"I just made myself available to them," Hunt cackles his trademark laugh.

"You have times like that. But I don't panic.

"I've always loved what [late Kaka Point poet] Hone Tuwhare said to a kid at a school one day. The kid asked him how he did it.

"And Hone said 'it's like when you're in the playground and a birdshit lands on your shoulder. It's just like that'."

He has always been passionate about taking his poems to the people; performing in hotels, theatres, rock festivals, schools and prisons.

In 1985, he was awarded a QSM for his services to literature.

"I do shows and I make a very good living out of it. But I'm sure I'd struggle if I only wrote books of poetry.

"The performance is a big part of it for me."

While in Dunedin, Hunt will also be involved in his other great love, music, completing an album with musician David Kilgour and his band the Heavy Eights.

"I'll be spending time with DK and the Heavy Eights putting the finishing touches on the new album. I'm the Heavy Ninth," he cackles.

"We've already got a dozen songs in the can."

Hunt recently collaborated with Dunedin composer Anthony Ritchie on a commissioned work, Coming to It, with the Wellington Sinfonia and conductor Patrick Flynn.

Other recent projects have included appearing as a guest on the Warratahs' album One of Two Things and collaborating with composer Gareth Farr on Baxter, a selection of James K. Baxter's poems set to music.