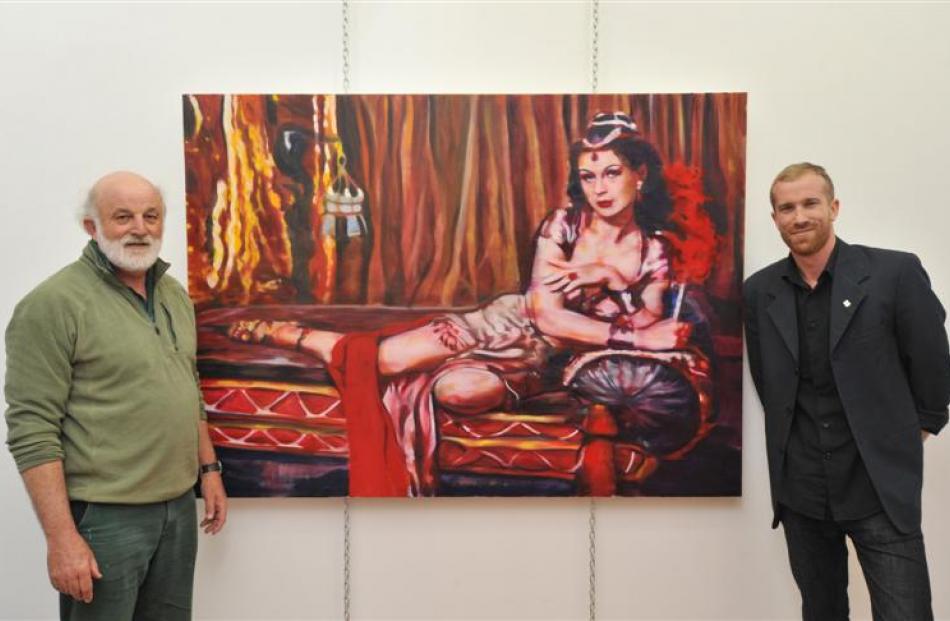 Scott Clarke (left) and Flynn Morris-Clarke with Flynn's The Mathematician, a portrait of Hedy Lamarr, an inventor and mathematician as well as an actress, in the film Samson and Delilah. 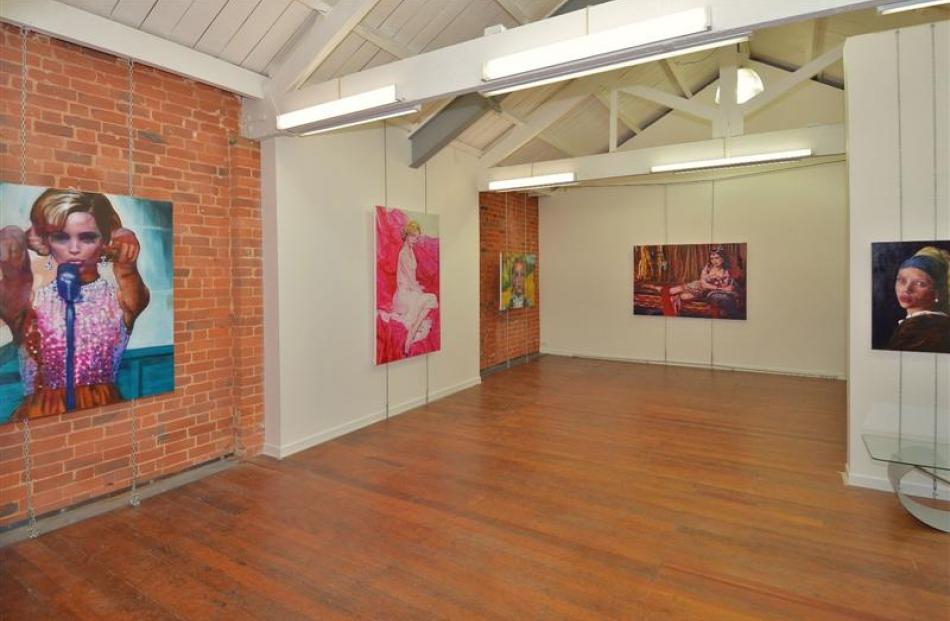 A new gallery, a collaboration between a father and son, has opened in Dowling St, Dunedin which is fast becoming an arts precinct. Charmian Smith reports.

For Scott Clarke, opening Brick Bros Gallery with a painting studio for his son Flynn Morris-Clarke, a photographic studio for himself, and a clean, white gallery space between, seems like a return to his roots.

''I have been far too long just an observer and I'm back putting myself in a position where I'm able to create,'' he said.

Clarke graduated from Otago Polytechnic School of Art in 1973 and spent several years in the UK as a commercial photographer before returning to Dunedin for family reasons in the early 1980s.

''They felt they could do it themselves and might I say that even today advertising in small businesses displays that, in many cases. The images are well short of the mark.''

However, he found an opportunity in the tourism industry and then became involved in ecotourism with Howard McGrouther, who had a farm on Otago Peninsula where yellow-eyed penguins nested.

''I was like the artist with weird, wacky ideas and he was prepared to humour me and cover me with a fantastic No 8 wire capability.

''Between us, we developed a unique attraction in the yellow-eyed penguin reserve at Penguin Place and had some wonderful times with that operation. We won a number of tourism awards, nationally and internationally over the years.''

Clarke describes the covered trenches and viewing hides he designed as a sculpture, but when the development phase was over he felt there wasn't much left of a challenge in it for him, so McGrouther bought out his share of the multimillion-dollar business about six or seven years ago. He retired but, despite doing some commercial photography and playing a lot of golf, became bored, he said.

His interest in art remained and his children, Flynn (now 28) and Greer grew up in a house full of artworks. He remembers taking Flynn, then aged 14, to the Guggenheim exhibition at the Dunedin Public Art Gallery.

''We started to talk about painting beyond just looking, discussing what the artist was doing and how they'd been painted and the techniques behind them and he just ate it up. I was quite amazed at how he was able to sustain the interest,'' he said.

Nevertheless, he didn't encourage his son to become an artist, so Flynn first studied art history and theory before going to art school, where he completed his master's a few years ago.

Making a living as an artist required sustained and focused discipline, and Scott Clarke believes his son demonstrated this when he was a middle-distance runner in his early teenage years, representing New Zealand several times.

It was one of his strengths when he was running seriously and he had taken that and moved it across to his painting, Clarke said.

Flynn points out, from across the studio where he is applying paint the colour of bruises to a large work inspired by a still from the film Child's Pose, that you have to spend a lot of time hanging out with yourself.

His work for the past few years has been portraiture, painting in oils from mass media images but putting his own stamp on them and using a technique that removes the sense of the brush stroke, he says.

He thinks his generation has a feeling of detachment, as though films and movies arouse more real and intense reactions than real life relationships.

''I look to display my subjects in a way that makes them seem like they've been burned by the situation they've been placed in, so they are not 100% comfortable with it.''

He wants the viewer of his work to speculate who his subjects might be and what might be going on behind the scenes. They are psychological pieces, he says.

Clarke and his wife Barbara Morris were planning to downsize their large house in Waverley, which meant Flynn wouldn't have use of the studio over the carport. Looking for a new studio, they found a large third-floor space among the cluster of galleries on Dowling St.

''I thought `this is way too big for Flynn's studio', so I thought maybe I could put in my own photographic studio and I could potter round and have space and help him pay the rent for a while.

''When we were stepping it out, how much space he would need and how much I would need, there was a significant space left over and I said if we put a nice little gallery here, it would probably be capable of paying the rent over time.''

They decided the gallery should be capable of showing artists' work in a professional way, and that it would be available for hire at a modest rent, so artists could sell their own work.

Flynn said: ''Dunedin has a lot of good painters working in lofts and warehouses but they don't have galleries and their work is not necessarily getting exposure to the Dunedin market. I've got friends I would like to show.

''There are other artists who are emerging, kids coming out of art school that have lots of potential and I felt this would provide the community with something that was definitely missing. There is no clean space to show when you are an emerging artist.''

Clarke said his photographic studio, with lights and other equipment would also be available for hire to artists with their own cameras.

Besides showing emerging artists, he also plans to show other artists' work just for the sake of showing it. He has friends and contacts in the art world going back to the 1970s and a large collection of art, he said.

''Who knows where this is going to take us? I've gained a lot of marketing experience over the years and I intend to put that to good use with respect to Flynn and any other young artist that I personally decide is worth me putting some serious effort into.''

Not only has the establishment of the studios and gallery changed the father-son relationship, Clarke enjoys interacting with other young people and looks forward to more of that.

''It's causing our relationship to mature - me learning to give Flynn real good space and to treat him as an intellectual equal - where the father is probably giving up the last vestiges of the reins, so to speak. I never stop worrying of course, but this project has helped that process dramatically.''

He also finds it stimulating to return to thinking about art.

''I don't comment too much on Flynn's paintings until asked, but he knows that when he does ask, I'm going to say exactly what I think.

''There are going to be no holds barred. Sometimes we get pretty stimulating discussions going on as you can imagine. What I enjoy now is when we do start these discussions I'm really having to think, but it's gone far beyond me delivering a lecture or advice, in that sense.''

Some people think he overindulges his children, he says. Besides helping his son with a studio and promoting his career, he helped his daughter Greer Morris-Clarke who had a degree in theatre studies from Otago but was keen to study in a school overseas.

''I thought that will be bloody impossible to get into, so I flippantly said 'if you can get into a school I'll match you dollar for dollar', thinking nothing more would come of this.

''But she's a persistent lass and some time later she said, 'Dad, I've got a scholarship to the American Musical and Dramatic Academy in New York', so I had to stump up and it turned out to be a very expensive exercise. She's working to establish herself as a performing artist and good luck to her. Again, it's a very difficult career.''

Flynn suggests a combination of a strategic father and an emotionally creative mother has enabled them to choose careers they wanted instead of falling into a job.

Although Flynn does not want to be involved in marketing and selling his work, his father forced him to look at what was needed to make it as a working painter.

''The reality is, for an artist to sell their work through traditional commercial avenues, to make a basic living wage which is about $18.50 an hour at the moment, they need to sell $100,000 worth of paintings a year.

They averaged out how long it took to make a painting, factoring time spent on those that didn't work, the cost of materials (about $900-$1000 per painting), transport and other overheads.

''If an artist is having to produce more than around 20 works a year, they are probably overexposing themselves to the market. An artist can't afford to overexpose their work. If they are really good, it should be hard to come by.''

''It's a sobering thought for many artists, but in my opinion, most of them sell their work far too cheap.''