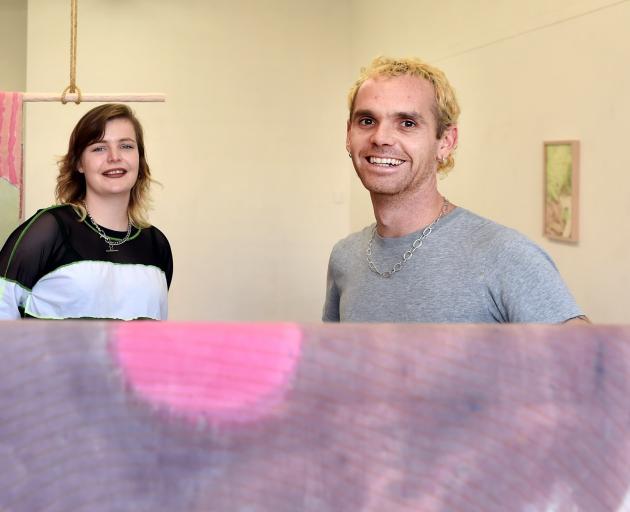 Artist Owen Connors gestures to the works hanging in a grid form behind him, saying they are "quite paired back" this time.

"My last show was quite bonkers," Connors says.

"SISSYMANCY" at Playstation Gallery in Wellington showcased quilts but much larger and brighter in colours than his latest works in "DUIRVIAS".

Based on the Exquisite Corpse game where each collaborator adds to a composition in sequence, but are allowed to see only the last lines of what the previous person created, Connors asked friends and artists to take part. They sent him their work and he quilted them together.

"It used quite crazy techniques. This one is more interesting in a standard way."

The works in "DUIRVIAS", based on Medieval tapestry, have been inspired by "transmissions received in the presence" of two memorials in Auckland dedicated to those who died of Aids-related illnesses: Memorial Tree and The Circle of Friends.

"I play with mystical traditions and the receiving of visions."

The Memorial Tree, located on Constitution Hill, is a pedunculate oak planted in May 1991 by Auckland Community Aids Services. It is accompanied by a plaque that reads "Remember those who have died of Aids."

The Circle of Friends, located in Western Springs Park, is a stone memorial engraved with the names of some of those who have died from Aids in New Zealand, along with others who are living with HIV/Aids, as well as partners, families and friends of those infected. 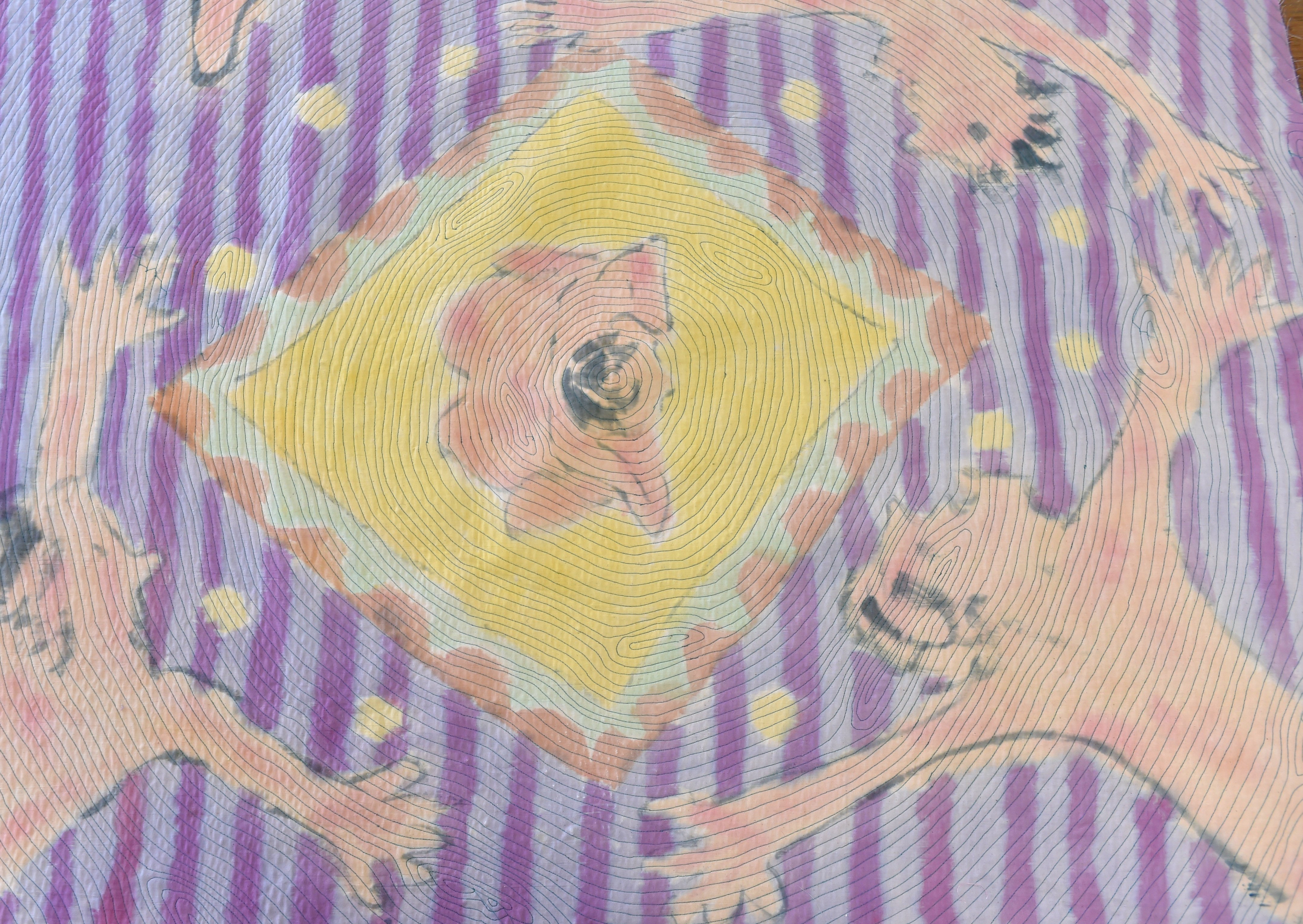 Detail of the cotton Duir Cycle quilts. PHOTO: PETER MCINTOSH
Connors, who has been Auckland-based for the past 10 years, researched the project while he was in Dunedin earlier this year as an artist in residence at the Caselberg Trust House and Charles Brasch Studio in Broad Bay.

"It was a different mode of work to being in the city ...

"It was a real privilege. It is the first time I’ve experienced being able to work that way. I could flourish and expand my practice without severe limits on my time. There is usually no time for experimentation."

While there he continued his research into The New Zealand Aids Quilts — nearly 1m by1.8m panels which are joined together in groups of eight to form 3.6m by 3.6m blocks created by friends and family to remember those who have died from Aids-related illnesses — and queer traditions of projective poetics.

"I got interested in it as part of a queer collective way of thinking."

The Aids Quilts inspired Connors, who grew up in Nelson and studied at Elam School of Fine Arts, Auckland University, to create his own large-scale works.

"I started doing the quilts a couple years ago. I’ve always done art. I’m a writer as well."

He quilts on a standard sewing machine, each one taking about two weeks.

Connors was drawn to the quilt because of its collectivity, its use of politics and ability to be used as an educational resource to teach people and children about HIV and intolerance. 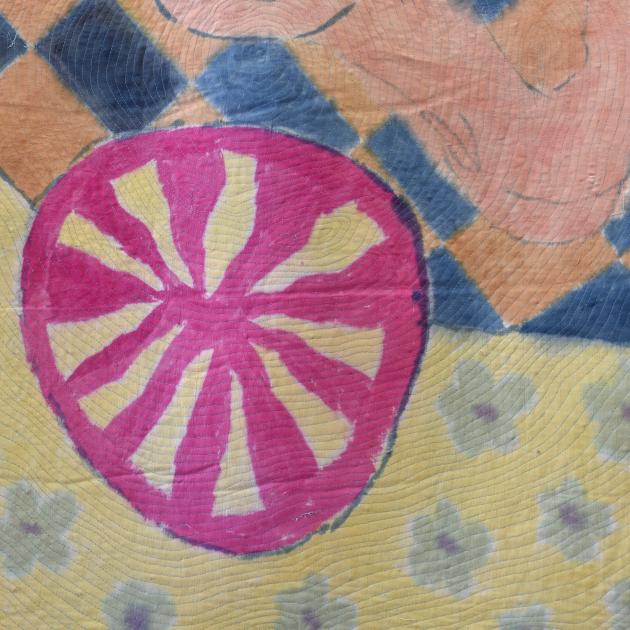 Detail of the cotton Duir Cycle quilts. PHOTO: PETER MCINTOSH
"It really drew me to the medium. I believe art has a role more than just as a commodity; that it performs a task in society.

"My work is explicitly in queer identity and community."

While there are five quilts being showcased at Blue Oyster Project Art Space during the next few weeks, he admits there are a lot of rejected ones.

"They’re hidden away back in Auckland."

Also on show are a series of drawings which Connors completed during the Covid-19 lockdown — being in an apartment with eight others and no outdoor space was not ideal, but he found it a strangely creative time.

"It was testing, at times."

As he was not able to work on his quilts and without access to art materials, he reverted to drawing, using colour pencil to create images based on a style he would work in to design a tapestry — working horizontally across a notebook page.

"It’s a translation across mediums. They’re talking about identity."

Whatever Connors tries his hand at — he started out writing poetry — collaboration is at its heart. 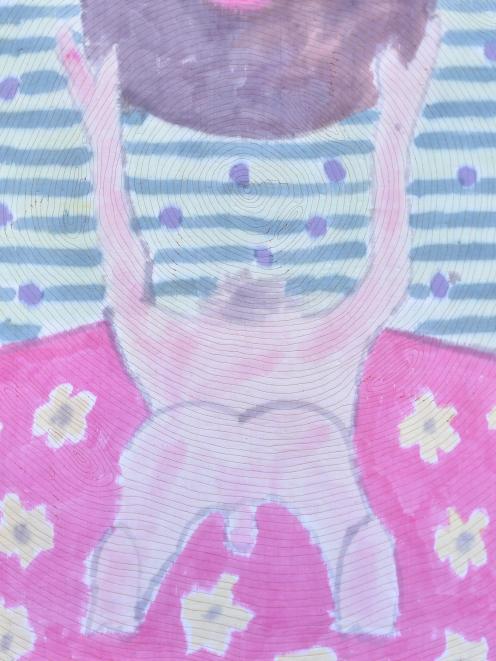 Detail of the cotton Duir Cycle quilts. PHOTO: PETER MCINTOSH
In "DUIRVIAS", he has collaborated with Laura Duffy, a video artist and curator from Wellington who he met a few years ago at an artist-run initiative.

"We’ve worked together in the art world quite a bit; not as collaboratively as this."

When Connors gave a performance in Wellington last year, Duffy came along to film it and the work drawn from that, The Warm Illumination of a Horizon, is shown alongside his work at Blue Oyster.

Accompanying both are words by Dunedin-based poet Frances Duncan.