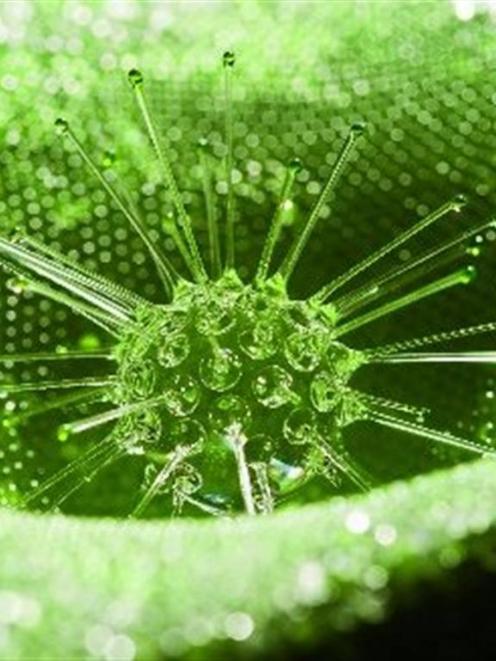 Another Green World, by Elizabeth Thomson. Photo supplied.
Some of the most spectacular glass art made in New Zealand over the past year is to be shown at an exhibition opening in Dunedin next week.

Milford Gallery director Steve Higginson, who has curated the 2009 "Glass Invitational New Zealand", has a personal penchant for glass.

"I love glass art because it's essentially in the fourth dimension. You can see inside it; you get the inside space," Higginson says. "It's almost the ultimate sculpture material, really."

The glass invitational was established three years ago as a survey exhibition of contemporary art glass made in New Zealand or by New Zealanders living overseas.

"First and foremost, because the quality of the work demanded it. New Zealand glass has become recognised as an international phenomenon," Higginson says.

"Our glass has a completely different look to other glass. European glass has had to conform to tradition. We don't have that problem.

"We've been able to sit back at the end of the world and develop a style uniquely our own. There's also been the influence of our Maori and Pacific culture," he says.

"The quality of work done in New Zealand is recognised worldwide as extraordinary."

Australia and New Zealand's premiere glass award, the Ranamok Prize for Contemporary Glass, has been won by New Zealand artists for most of its 15-year history.

The glass invitational acts as a window into contemporary practice by giving glass artists the opportunity to present experimental work.

Historically, glass art has been dominated by cast and hot (or studio) glass.

Glass art became established in New Zealand in the mid-1960s, with the opening of the Sunbeam Studio in Auckland by Ann Robinson, Gary Nash and John Croucher.

The hot-glass studio mainly made glass trinkets and bowls.

All three would go on to become pioneers in the fledgling glass art industry. Robinson later left the studio to experiment with sculptural techniques.

"She is now acknowledged worldwide as among the greatest glass artists in the world," Higginson says.

The American Glass Society presented Robinson with a lifetime achievement award two years ago. "That's a bit like winning an Oscar," Higginson enthuses.

"The story of New Zealand glass art really began with the Sunbeam Studio," Higginson says. "Part of the reason they were so influential, was they were always willing to share their knowledge."

Where Robinson explored cast-glass techniques, Nash threw himself into the hot-glass medium.

Just as significantly, he became a father. His son, Luke Jacomb (31), is now regarded as New Zealand's premier glass artist.

Jacomb was the first New Zealand artist in any medium to have a solo public art gallery exhibition in the United States.

His exhibition, "Seeking the Light: Studio Glass by Luke Jacomb", showed at the New Orleans Museum of Modern Art, in Louisiana and the Decorative Arts Museum, in Milwaukee, last year.

"Luke possesses a wider array of skills than ever before seen in New Zealand," Higginson says. "He has developed a coherent body of work directly informed by the New Zealand he grew up in."

The 2009 "Glass Invitational New Zealand" opens at Milford Gallery, in Dunedin, on February 27, and runs until April 15.

Talks focusing on the featured glass artists and their methods, and a guided tour of the exhibition, will be held at 2pm on February 28, March 14 and March 21.

The exhibition features works by these leading glass artists:

Ruth Allen (Melbourne)
Allen uses traditional hot-glass techniques to build abstract forms. She then sculpts glass and uses light, shadow and refraction as a core component of her wall installations.

Jim Dennison and Leanne Williams (Wairarapa)
The pair merge areas of industry, design, art and iconography. In their Sophora Chandelier works, the unopened flowers of the kowhai await light. In Plume, eight tiers of a budgie's wing look like a Maori cloak.

Lyndsay Patterson (Wanganui)
Combines the murrine technique of hot-glass blowing with the surface intervention of carving, grinding and engraving. He is also known for his use of colour and repetitive pattern to reflect the Pacific.

Elizabeth Thomson (Wellington)
The 1998 James Wallace Art Award winner uses glass in unconventional ways. In her Another Green World series, she has used luminous green acrylic applied to a fibreglass mould to create a microbiological landscape of deadly seduction and dangerous beauty.

Galia Amsel (Auckland)
Amsel triangulates open circular forms through processes of sand-blasting, resist-masking and polishing. The works play tricks with light, colour and line of sight, creating a sense of movement and motion.

Stephen Bradbourne (Auckland)
In this new body of work Bradbourne has explored the bottle shape through a process of deliberate restriction. The murrine-derived patterns established are elongated, yet understated.

Evelyn Dunstan (Auckland)
The 2007 Ranamok Prize for Contemporary Glass winner is known for her narrative works created with lost-wax casting. In Crowning Glory she deconstructs the vase form, while Conundrum #2 depicts convolvulus strangling the forest.

John Edgar (Auckland)
Edgar has been using glass with stone in his sculptures since 1980. His works often feature a window of glass, which allows one to see into the heart of stone and the light emerging from the stone's density.

Sue Hawker (Kerikeri)
Hawker combines the art historical classicism of the portrait bust and notions of beauty with the political and social debates of identity in New Zealand. Hawker recently showed her "I Am . . . Pakeha" exhibition in Dunedin.

Elizabeth McClure (Auckland)
The hot-glass artist plays with form and function to examine how science is invading our homes and lives and our unquestioning trust of this.

Emily Siddell (Auckland)
Siddell melds figurative concerns, environmental narratives and the tonal neutrality of float glass, combined with Polynesian motifs. In Jardin de Fleurs she has created both a garden environment and an installation.