Karley Parker’s paper trees have played an important part in her journey to accepting her low vision. PHOTO: GREGOR RICHARDSON
Most students at some time have had the urge to tear up their study notes and texts but Karley Parker actually did it — in the name of art, of course. She tells Rebecca Fox about creating accessible art.

Surrounded by ripped up paper and glue, her favourite music playing, eyes closed, Karley Parker is in her element.

She works happily for hours creating "tree-like" sculptures starting with cardboard and wire and covering it using papier mache and other random things she has around the house, creating various textured finishes.

"I have this image in my head of how I want it to feel but not how the end product will look like. I’ll get this snippet in my head of what an element of it is going to be."

That is because she likes to go with the flow when creating and also because she invites her flatmates to put the finishing touches on them by painting them.

"I took over the whole house at some points with bits of paper and glue everywhere. We’d all sit there and chat about how we’d like them to look. My flatmates are the artists as well, helping create the trees.

"It’s a collaboration piece. In all honesty I wouldn’t be able to complete them without them." 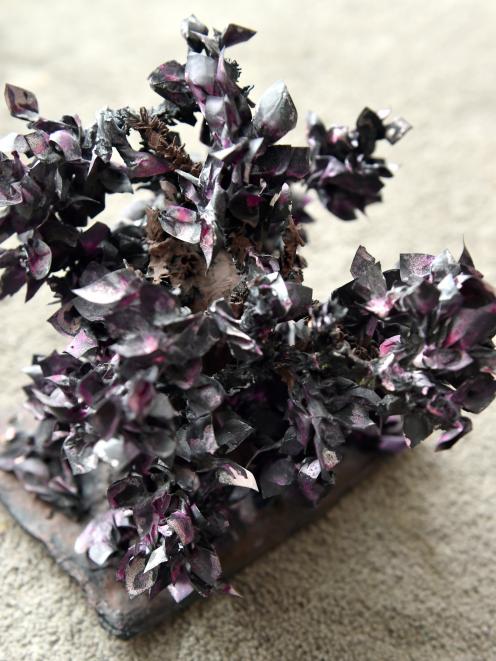 One of Karley Parker’s trees. PHOTO: GREGOR RICHARDSON
Parker cannot paint them herself as she has low-vision.

The endeavour started two years ago as Parker, who had been struggling with the restrictions her low vision placed on her, was coming to terms with it.

"I was transitioning into a more authentic version of myself, where I was starting to accept my impairment and low vision."

She had just finished her degree and was listening to an audio book by Richard Powers.

"I started to realise I couldn’t really read all my study notes and just decided to rip them all up and create something and out came the trees, pretty much."

It was a satisfying experience, she says.

"It was such a sighted world aspect of my life to be able to write neatly and fit into the world and then ripping it all up and making something out of it and learning to write and read in a different way has been pretty awesome."

A lot of her life she has struggled with walking on uneven surfaces, making walks in gardens, parks and forests something she avoided.

"I wasn’t really able to engage in nature in that way. By accepting my own way of living I have embraced that and don’t feel that fear anymore.

"Creating these tactile trees and linking with nature is the best way I’ve learnt to engage in my own world."

"What I love about them is that they are tactile. [At] a lot of art exhibitions and galleries, it’s look don’t touch. That doesn’t do much for me."

So she wanted to create art that was accessible and tactile.

"For some reason, it’s all just become trees."

Parker makes her own glue the old-fashioned way with water, flour and salt in big bowls.

"I just rip up bits of paper and stick it on."

The works have developed as she now also uses bits and pieces she finds in the creations, from pipe cleaners to flax leaves.

"It gives different elements to it."

Each work takes various amounts of time as she fits it around her other projects.

They have been key to her journey to accepting her place in the world instead of fighting it all the time. She has always had 10% vision and made it through school by determination, often struggling with feeling burnt out.

"I don’t see myself as having a disability per se, I just access the world in a different way. It’s something I have learnt to accept and enjoy about myself."

So Parker has started to use a cane and learn braille.

"Owning my identity and using my cane — I didn’t want it to be a standard cane. I wanted it to be painted, for it to be mine."

Now that feeling of being perpetually burnt out has lifted and she is enjoying new endeavours.

She is part of a campaign which is trying to get a continuation of the free fares people with accessibility issues got during the Covid-19 lockdown.

"We want to promote the wellbeing needs of people with access issues so they can live in the community the way everyone else does."

One of Parker’s degrees is in social services specialising in disability support and she has also just finished a leadership programme with BLAB focusing on what it meant to be a leader for people with accessibility needs.

"It’s about being courageous, to step up and promote change. Working with people who accepted who they were really helped me along my way."

She hoped to continue with her art. The trees are often given to people who have walked alongside her on her journey.

"As long as when I get the picture in my head of what the tree feels or looks like in a certain way I know who they are meant for and why. It’s really important to me to give them as gifts — it’s that appreciation and respect for those people who give their time and energy into working with me."

Parker is quite nervous about putting the works on show but one of her goals was for them to be tactile and interactive so people with low vision can interact with art.

"I want them to enjoy it the same way people do who can look at it."

Branching Out - A Tactile Exhibition of Book Art