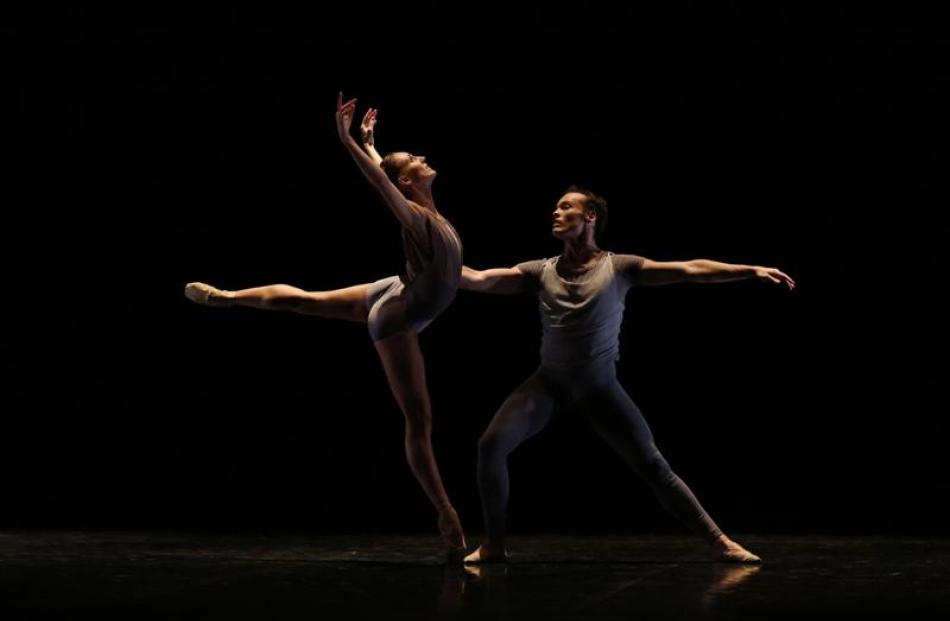 Of Days. Photos by Evan Li. 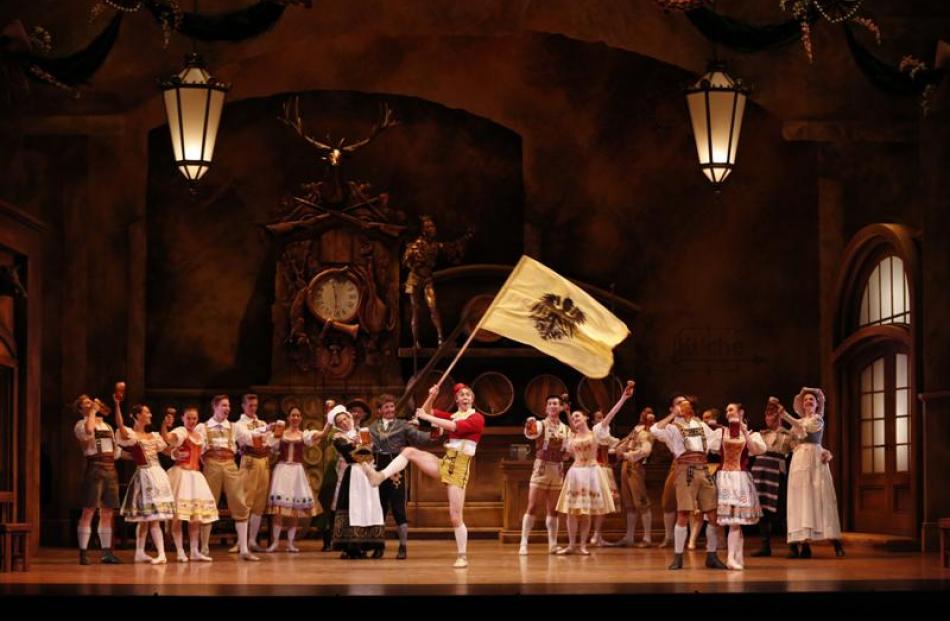 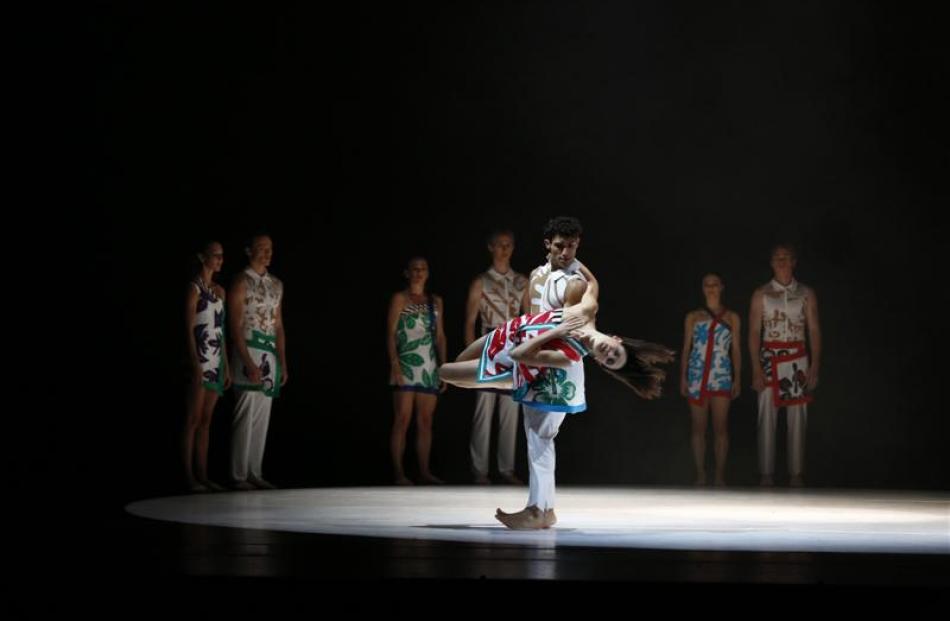 The Anatomy of a Passing Cloud.

Three very different world premieres in one night is an invigorating start to the Royal New Zealand Ballet's 60th anniversary celebrations. Charmian Smith talks to the choreographers of Made to Move.

An energetic modern dance, a moving contemporary ballet and a storybook ballet full of good-humoured fun make up the programme for the Royal New Zealand Ballet's Made to Move performance.

Company artistic director Ethan Stiefel says it shows their versatility. The production, which opened in Wellington recently, is touring the country and comes to Dunedin next Wednesday.

Stiefel has choreographed the last of the trio, a humorous romp called Bier Halle, set in a pub somewhere between Austria, Bavaria and Germany and danced to waltzes and polkas by Johann and Josef Strauss. Despite its lighthearted nature with studs and flirts, a bird and a nerd, a beer maiden and her hunter paramour, and a quarrelling butcher and baker, he says it has some challenging virtuosic ballet technique at its heart.

''It builds off the ballets of the past but presents it with the technique of here and now and some things within the sequences reflect the adeptness of the dancers' technique in 2013,'' he says.

The evening opens with Javier de Frutos' The Anatomy of a Passing Cloud, inspired by the rhythms and colours of the Pacific. It is the third ballet the London-based choreographer has created for the company.

He started with Pacific music ranging from Cook Island drumming, ancestral Pacific songs and Hawaiian barbershop quartets to the Yandall sisters and the beginning of Genesis read in Maori. Because the rhythms of the language and the music are different, the dancers move differently, he explains.

''I was most certainly not going to use Polynesian dance vocabulary, because it was not an ethnic or an anthropological work. It was a celebration of music that was much nearer to the company than it is to Europe. Because it is a ballet company, why should the only music allowed be European when you have this amazing array of sounds and colours? I thought I would celebrate it.''

The costumes were inspired by the patterns and colours of Cook Island tivaevae. Having grown up in Venezuela, a former Spanish colony, de Frutos knew the European colonisers and Christian missionaries eradicated a lot of customs and religious beliefs and created interesting hybrids of cultures. The locals turned their backs on their own cultures thinking the bigger, better cultures came from Europe, he says.

''Sometimes I think it's amusing to see and sometimes I get angry. Those elements are in the work. I felt it was important. It's not hammered - it just gives a different layer that you can immerse yourself in and I think for performers and audience that's important, the humanity of it,'' de Frutos says.

''I'm not very good at doing happy pieces. Halfway through, I said it wouldn't be a real celebration by me if it didn't have some of the elements I love in theatre. When it comes down to sexuality and violence I'm fairly graphic. I don't like stylisation and I felt I didn't want to portray my Pacific influences as a tourist board attraction. I wanted to show there was complexity, that there was testosterone, strong women - I like my women strong.''

The work was created by the dancers using trial and error before the steps were fixed.

''There's a lot of talking, a lot of directing the motivation for movements, a lot of extreme situations and speed just to trigger responses which means I get to know the dancers better. It's like workshopping it for weeks,'' de Frutos says.

''It means that every single piece of movement that happens on stage should have the feeling that it has just erupted at that minute rather than that it has been rehearsed for eight weeks. It has been rehearsed for eight weeks but it should still have the element of surprise of something that has just emerged in front of you and makes the audience feel they are the first and the last people who will ever see that movement, even though it's repeated every night.''

In contrast to the bright energy of Anatomy of a Passing Cloud, Andrew Simmons' Of Days is slower, with mesmerising moves, dancers in subtle shades of grey and lighting that is an integral part of the beauty and mystery of the piece.

Christchurch born and raised, Simmons, a former dancer with the RNZB, is now based in Germany where he teaches ballet and is developing a career as a choreographer. This is the sixth work he has created for the company. Although only 27, he has given up dancing in favour of choreography because he felt a greater connection with making dance than actually dancing, he says.

''I felt as a choreographer I could better convey on other people what I felt about what dance should be and my idea of ballet and beauty, as opposed to doing it myself. Other people are far more gifted dancers than I ever was and that's a good mix to have.''

Exploring movement and the way dancers transition in and out of a space are important to him, rather than a theme for the work. If you tell people what they need to feel about a work it hinders them from making their own emotional connections and interpretation, he says.

Music is the first thing Simmons finds when planning work. Not keen on big orchestral numbers, he looks for something calmer, but rich and full. With Of Days he feels the music is so integral to the work, it is almost like another dancer.

Getting to know the music he had chosen - recordings by Olafur Arnalds, Dustin O'Halloran and Ludovico Einaudi - planning the lighting, costumes, stage design and the overall look of the work, took about a year, he says.

Then in New Zealand he had six weeks with the dancers to create the steps. Having worked with many of them before, he was able to reconnect quickly.

''You can pick it up where you left off from last time. They know what I would like and what I wouldn't like so the process of creating is a lot more fluent.''

See it
The Royal New Zealand Ballet's production of Made to Move is touring the country and will be playing in Dunedin at the Regent Theatre on March 20 and in Ashburton on March 23 and 24.