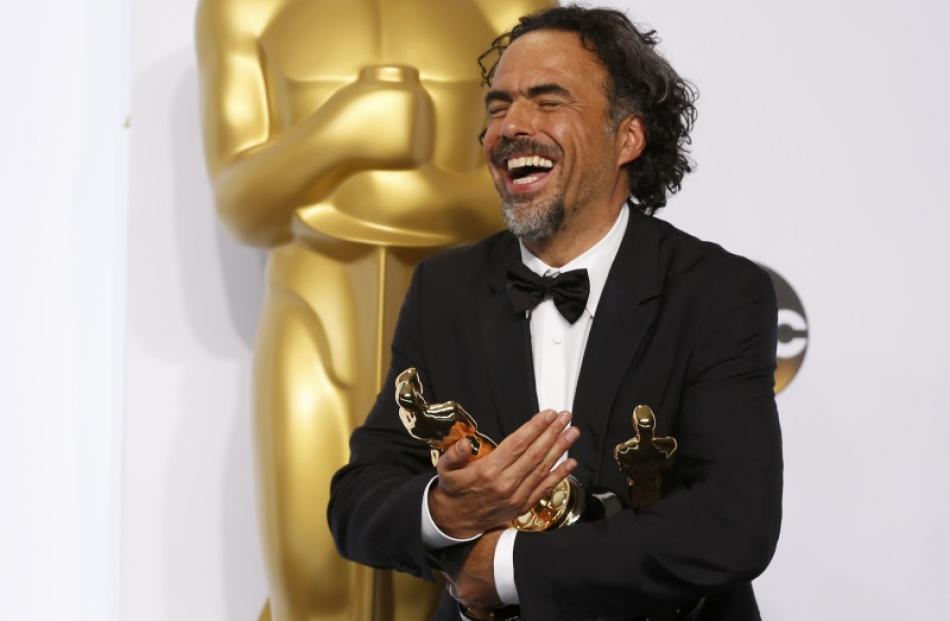 The dark comedy "Birdman" held up a mirror to Hollywood and its struggling actors and in return received the film industry's highest recognition, the Academy Award for best picture.

Director Alejandro G. Inarritu's story of a washed-up, former superhero actor attempting an improbable comeback on Broadway won four Oscars in its nine nominations, including best director, the second consecutive win in that category for a Mexican filmmaker.

Acclaimed for looking like one continuous shot through a Broadway theater and mixing reality with fantasy, the movie, Inarritu said, came from learning to be fearless in filmmaking.

"Fear is the condom of life. It doesn't allow you to enjoy things," Inarritu said backstage at the 87th Academy Awards.

The reward for the Fox Searchlight satire hews to an Academy tradition of awarding films that honor the entertainment industry, such as "Argo" and "The Artist" in recent years.

Britain's Eddie Redmayne won best actor with his painstaking portrayal of physicist Stephen Hawking in "The Theory of Everything", robbing "Birdman" lead and former superhero actor Michael Keaton of a big comeback moment.

Each of the eight best picture nominees went home with at least one award, but it was a disappointing night for "Boyhood," Richard Linklater's unprecedented 12-year endeavor to depict the simple story of a boy growing up, using the same actors. It won one Oscar out of its six nods.

Wes Anderson's colorful caper, "The Grand Budapest Hotel" proved popular among the 6,100 members of the Academy of Motion Picture Arts and Sciences who vote for the Oscars, winning four awards on its nine nominations.

The only box office blockbuster among the eight, the Iraq war drama "American Sniper" from director Clint Eastwood, also fell short with one win.

It was a night in which the controversy over the lack of diversity among this year's nominees was front and center. First-time host Neil Patrick Harris opened the telecast with a quip: "Tonight we honor Hollywood's best and whitest, sorry brightest."

But the race theme resonated in a more serious way too, when Common and John Legend got a standing ovation and made many in the audience cry with their performance of "Glory" from the 1960s civil rights drama "Selma."

It won best song, delivering the sole victory to "Selma," the film at the center of the diversity debate sparked by the exclusion of actors of color from the four acting categories. The nominations prompted a backlash on Twitter with the hashtag "#OscarsSoWhite.

"'Selma' is now, because the struggle for justice is right now," said Legend in the aftermath of recent racially charged protests in America.

Redmayne, who won critical acclaim for his depiction of the various stages of disability endured by Hawking, who suffers from the motor neuron disease known as ALS.

"I am fully aware that I am a lucky, lucky man," Redmayne said. "This Oscar belongs to all of those people around the world battling ALS."

Five-time nominee Julianne Moore won best actress, also for her portrayal of an illness, as a middle-aged woman suffering Alzheimer's in "Still Alice."

"I read an article that said that winning an Oscar could lead to living five years longer," said the 54-year-old Moore. "If that's true, I'd really like to thank the Academy because my husband is younger than me."

Patricia Arquette won best supporting actress for her role as a struggling single mother in "Boyhood" and made an appeal for equal pay and rights for women in America in her acceptance speech.

J.K. Simmons, after decades as a character actor, won the best supporting actor as a monstrous music teacher in "Whiplash".

For the biggest televised event outside the sports world, the Academy aimed to attract young viewers who may not care much about the films but who could tune in for the musical acts.

A bridge between the young and old, pop diva Lady Gaga received a standing ovation for her medley of tunes from "The Sound of Music" before introducing that film's star, Julie Andrews.

Harris got laughs with his brave appearance in white underwear, a spoof of Keaton's opening scene in "Birdman." But some of his jokes fell flat and his debut got mixed reviews.

Ratings for the ABC telecast might also suffer because the show ran past midnight on the U.S. East Coast.

Poland's "Ida" clinched best foreign-language film, and director Pawel Pawlikowski pushed the 45-second acceptance speech boundary to thank "my Polish friends who are in front of the TV, the crew who were in the trenches with us and who are totally drunk now, and you were fantastic."

"The subject of 'Citizenfour,' Edward Snowden, could not be here for some treason," joked Harris.