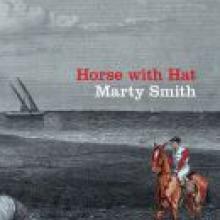 HORSE WITH HAT<br><b>Marty Smith</b><br><i>Victoria University Press</i><br>
Gorgeous, evocative collages by Brendan O'Brien can be found on the cover and throughout this debut collection by Marty Smith.

my grandmother lived mon her half of the farm.

No chance meetings, not even a skyline sighting.

She lay in wait in town watched from the haberdashery as he walked up the street.

She came out as if by accident.

Hand frail, and clasping the front of her coat,

she gave a coy look from the bags of her bloodhoundeyes -

The whole air stopped he raised his hat, went past.

Smith's father did not speak to her grandmother for 18 years, then he died first.

Family is the focus of this little collection.

Smith grew up on a remote and wild hill-country farm in north Wairarapa.

Her great-grandfather cleared the native bush in the 1800s.

Smith's poems are not fluffy and nice.

They are full of jagged adventures.

The reader is caught up in the violence, the threat of violence, grease and oil, bad tempers and men at war.