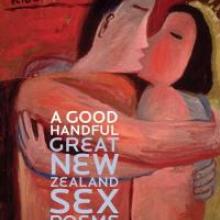 Sophocles is reputed to have said about sex when he was old: ‘‘. . . most gladly indeed am I rid of it all, as though I had escaped from a mad and savage master''.

Stu Bagby, editor of the poetry anthology A Good Handful: Great New Zealand Sex Poems, does not share Sophocles' sentiments, which may go some way to explaining why he enjoyed pulling together works from a wide range of New Zealand poets.

‘‘When I began my research I was looking for poems which were accessible, were humorous and which dealt with the topic without being crude or pornographic. The more I read the more the variety and depth of the material I found convinced me the book should be more complex than the light-hearted flirtation I had intended.''

Released today by Auckland University Press, A Good Handful features entries from 63 poets, who talk frankly about sex from all angles: there is the amusing (Karl Stead's ‘‘tree in my trousers''), the disturbing (Rachel McAlpine's ‘‘frightened poem about my breasts''), the ordinary (‘‘The sex life of the sheep/is at best perfunctory'', Anne French explains) and extraordinary (‘‘Ah, fantastica!'' Lauris Edmond exclaims).

Yet by the end of the collection, some poets have had enough: ‘‘Altogether we've come to the conclusion that sex is a drag/Just give us a fag'', writes Fleur Adcock.

‘‘When I started looking around, there seemed to be plenty of material. As I put it together, the book took shape,'' Bagby explained, adding that although he did not attempt to tick the various boxes of sexual experience, he believed he had covered ‘‘most scenarios''.

‘‘I'm sure I've missed a few. Of course, it is a personal anthology, not an official authorised overview sort of thing. Given that, I felt I could perhaps choose more poems by poets I liked than others.''

The anthology was also an attempt to deal with a topic that, in other hands, could have been rendered merely bawdy.

‘‘The whole idea of the book was not to be a limerick, nudge-nudge, wink-wink, behind-the-bike-sheds thing. Yet, at the same time, you can't have a book about sex and be too coy. One or two of the poems are direct, but . . . there was no attempt to make a sensational, crude book.

‘‘I've laid it out, more or less, from childhood innocence to reflective old age . . . I've tried to cover most things in between, but I wasn't too scrupulous. I think there is quite a range of attitudes.''

Born in Te Koporu in 1947, Bagby lives in Albany, Auckland. The winner of the 2000 New Zealand Poetry Society's International Poetry Competition, he has published many individual poems in journals and magazines over the years, although his first collection was not published until he was 55 years old.

His work includes a solo collection, As It Was in the Beginning, and he has edited several anthologies.