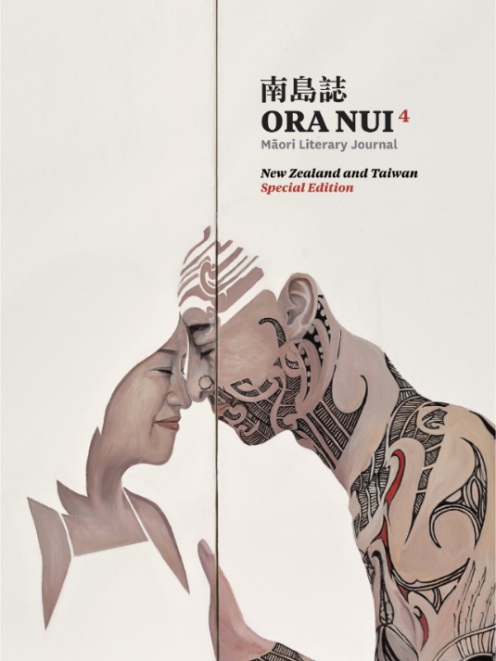 The fourth issue of the Ora Nui Maori Literary Journal is dedicated to Maori and Taiwanese connections, with the starting reference of Austronesian migration.

As outlined in the introduction, a popular theory of a shared history of origins is that Maori descend from the outward wave of indigenous peoples from Taiwan. This migration moved south, spreading throughout the Pacific. According to this, people in Polynesia, Southeast Asia, West New Guinea, and Madagascar would share genealogical, linguistic, and cultural links to the East Asian country. This issue focuses mainly on indigenous traditions, beliefs, and creativity of these two broad groups of peoples, and, as a collaborative venture, it has both New Zealand and Taiwanese editors (Kiri Piahana-Wong and Shin Su). It includes both written and visual contributions, with intriguing insight into indigenous Taiwanese arts and crafts.

Written contributions include poetry, short fiction, essays, and non-fiction. A recurrent focus is the loss of heritage, traditions, language, and knowledge; another is death and its rituals. Some pieces look to the future, with innovative style and content, such as Gina Cole's ‘‘Sunset on Mars’’, while others draw on legends and nature as intertwined with daily life.

Hinemoa Jones outlines a day on a marae from the perspective of a busy mother, contrasting this with another piece where White Man has told children to wipe their mother's words from their lips. The legacy of colonialism is ever present; it is, likewise, for the indigenous people of Taiwan who have been colonised many times over. Gerry Te Kapa Coates makes this link between the two countries explicit in his poem ‘‘Walking in Your Shoes - We the Colonised Unit’’.

Many pieces include conflict and unease, as in Amber Esau's poem ‘‘Manaakitanga’’: Aotearoa: land of the long white halls/ carved with seats made of tears,/ lit in the half-light of debt. Others, like Arihia Latham, make fresh images of nature: the pingao hugs the dunes, a gold scouring pad working/ the night-matched iron sand into a shine.

In Faisu Mukunana's story, she, who has lived through two regimes, writes to her dead grandfather, apologising for the lack of a tombstone. Her story looks at her tribe's rituals which are under threat, and how the Tsou cultural heritage, as an oral language only, is in danger of being lost. Writing systems had to be borrowed from other tribes.

There are contributions from a families of craftspeople, known as pulima, fusing the tribal and urban. There is the unique art technique known as ‘‘Trace Layer Carve Paint’’. Other art work from both cultures includes blown glass symbolising rebirth and planting ceremonies, those that reflect raranga Maori weaving traditions, double-tubed nose flutes, and the female hand tattooing of the Rukai and Paiwan people.

This is an extensive and wide-ranging collection, with generous visuals breaking up the mass of verbal content. Following the bulk of contributions, the section entitled Austronesian Studies has non-fiction material, with focuses including those anthropological, filmic, and linguistic.

Anahera Gildea sums up the welcoming tone of the collection in her poem ‘‘a tsunami of movement - mihi to the peoples of the Pacific’’ in the words: We were born into movement/ flung through a spiritual corridor/ between worlds; a tunnel/ of generations floating/ on the thousand tongues/ of moana-nui-a-kiwa. Here we are privy to all kinds of legacies and insights from such a movement of people, as cultural traditions and creative minds flourish in vibrant, startling ways.