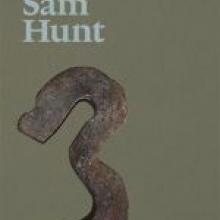 CHORDS & OTHER POEMS <br><b>Sam Hunt</b><br><i>Craig Potton</i>
The cover of Sam Hunt's new collection of poems Chords & Other Poems features a photograph of a bent old iron New Zealand Railways de-stresser. The de-stresser sits on Hunt's log-burner in the lounge of his Kaipara home. Hunt might need a de-stresser as he has been busy lately.

Doubtless (Craig Potton, 2008) was released featuring new and selected poems along with a semi-autobiography Backroads: Charting a Poet's Life (Craig Potton, 2009). He also recorded a CD with David Kilgour, and the documentary Sam Hunt: Purple Balloon and Other Stories has been in cinemas lately. All this activity from the man who has helped shape New Zealand poetry and culture over the past 40 years.

With Chords, Hunt described the pages of a book as "like being handed a sheet of music without hearing the song first. A poem is an active composition and you should have the chance of hearing it speak to you." He has a familiar sing-song voice, that off-the-cuff, breathless style, distinctive drawl and slice-of-life word play. All of this comes to life in this new collection.

At 64, Hunt says writing poems is intuitive. "It sort of hits you like seagull s... from out of the sky." Fortunately, the inspiration of Chords does not come in the form of bird droppings. He pens chords literally on growing old, being home, what resonates in the heart and death. Hunt has been advised not to perform after 8pm or go on another national tour, but he is still producing a lot of poetry.

Hunt still writes poems about faith: "24":
Was I one of the twelve
who sat with you at the table?
the one still counting his beads
while the rest got stuck in.
When Judas kissed you
I thought he was on your side
Could be I got it wrong.
Which is, it
seems, quite likely;
likely, too,
the man they nailed up
was never you.

This brand-new collection may not serve up a "Brother Lynch", "Maintrunk Country Road Song" or his recent stunner "Lines for a New Year", but do read it out loud. By the end you may even sound like Sam Hunt, stress-free and enjoying a glass of wine. 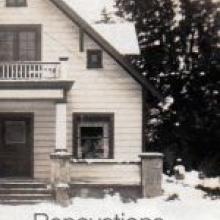 RENOVATIONS <br><b>Marion Jones</b><br><i>Steele Roberts</i>
• A little older than Sam Hunt, Marion Jones has just released her debut collection of poems, Renovations. Jones arrived in New Zealand from California in 1964 and lives in Brighton, near Dunedin, and has had help from Diane Brown, Lawrence Jones and Michael Harlow.

Jones' poems seek to resolve darkness and light, sometimes with a tossed-off charm. Each poem builds up a mood of seething tension, yet they are full of beauty and strength. "From a father's letter":
You're the only one, who left
never to return. My winter
solstice
draws me back to the shepherd's
hut,
to the double-hung sash we slept
beneath. To the pool where we
sat
lost for words; to the river where
we walked on opposite sides;to the lake, the distance too great
to shout across. Again darkness
comes. On the far shore, a fire.
Is that you, daughter, over
there?

Ordinary things have a dark, edgy feel. Angels and ghosts drift into some of these poems. The centre of the collection finds Jones reflecting on seven paintings by Andrew Wyeth.

Often the settings are on the Taieri Plain, in Central Otago or even Arthur Barnett's. Jones has seen a lot and brings this out in pared-down poems - more than 50 in 70 pages. Renovations is crisp, genuine and intense. There is an irresistible sense of pathos.

These poems make you sit up and think.

• Anna Jackson's fifth collection is Thicket. She made her debut in AUP New Poets 1 (AUP, 1999). Jackson teaches in the English department at Victoria University, and has also lectured at Otago, Auckland and Oxford universities.

Her last collection, The Gas Leak (AUP, 2006) was an ambitious long narrative poem.

Catullus for Children (AUP, 2003) and The Pastoral Kitchen (AUP, 2001), Thicket returns to domestic poems with overlapping wit, humour, borrowings and lyricism. Jackson plunders the old folk tale The fish and I for a poem and uses Virgil's Aeneid and the story of Little Red Riding Hood for others. But she does it so well. She pays homage to her source material, as in "Imogen", the heroine of Shakespeare's Cymbeline:
Innocence built her open
inside,
anger,
a glorious spray,
hunger,
a shore that love rode in to.
We were all watching
Imogen.
Even you had to admit
he was good for her,
the calm coming to seem
like home.

I loved the poems when she was playing badminton with her child or bathing her daughter.

Jackson's penultimate verse in this collection reads: "This is a thicket, / not a casket, / and one day we'll walk out; ..." In the meantime we can walk in and buy this little collection. It is stunning stuff, as infectious as always, with a lyrical warmth and emotional rawness few poets combine as convincingly.

Duck Weather (Poets Group, 2005). It slipped under the radar and I hope this follow-up collection, The Corrosion Zone, boosts her profile.

Strang writes poems that are amazingly controlled and unflinchingly raw. She dwells on the push-and-pull of relationships and the solace of solitude. The Corrosion Zone is poignant and gorgeous.

As Sam Hunt says in the Cobb & Co advertisement on TV, all these new collections are "My oh my"!