Putting the treaty in context of its time 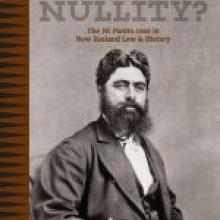 Some years ago, during an interview with David Lange, our conversation drifted on to the constitutional standing of the Treaty of Waitangi. After explaining his government's application of treaty principles to policies, he then emphasised that he'd read enough history to know that the modern view of the Treaty was unhistorical.

He really didn't believe that Queen Victoria had signed a treaty of equality and partnership with "500 thumbprints", as he put it.

Lange called the Treaty a myth, but a necessary one. David Williams agrees, labelling the central role given to the Treaty "an invention of the 1980s. A good invention - but an invention nevertheless".

To explore the dissonance between history and modern consensus-building, Professor Williams scrutinises the Wi Parata case in great detail.

If New Zealanders know anything about this case, it's that just about every modern writer denounces Chief Justice James Prendergast for asserting in 1877 that the treaty was "a simple nullity".

But did he? And was the judgement so wrong?

The case was a suit against the Bishop of Wellington. Parata brought it for the return of land at Whitireia, near Porirua, given by two young Christian converts, Katu Tamihana Te Rauparaha and Henare Matene Te Whiwhi-o-te-rangi for religious instruction purposes.

Parata claimed restitution or compensation on the grounds that the terms of the gift had not been honoured. Sounds simple? Well, not really.

In a detailed argument, Williams explores Maori and European notions of land ownership and gift-giving.

He makes the point that Selwyn's colleges were for both Maori and settler children - they were never intended solely for the benefit of Maori as Parata claimed.

He then goes on to explore the appreciation of the Treaty down through the decades, as well as the concept of native title. Along the way, he also makes a convincing case for fellow judge William Richmond being the author of the judgement, with Prendergast merely delivering it, that being usual practice for when two or more judges sat in banco (jointly).

While the topic involves some explanation of legal terminology (in banco, obiter dicta etc) and a burrow down into historiography, Williams explains it clearly and sometimes puts his personal experience as a claims submitter and occasional activist in first-person terms.

Williams concludes by arguing that Parata "is a convenient [his emphasis] decision for contemporary Treaty of Waitangi and aboriginal title jurisprudence. It enables us to lambast the awful 19th-century past, and implicitly praise our current more enlightened views."

A Simple Nullity?, like Michael Belgrave's Historical Frictions (2004), therefore, is a welcome re-examination of colonial race relations and a reminder that we should always try to see historical figures in the context of their times.

As the novelist L. P. Hartley once warned, "The past is a foreign country: they do things differently there".