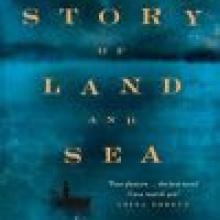 THE STORY OF LAND AND SEA<br><b>Katy Simpson Smith</b><br><i>Borough Press</i>
There's a line that crops up in many religious sermons, ''in the midst of life we are in death'', and just when the reader might be warming to the characters in The Story of Land and Sea, whoops, the author removes them to the afterlife; and since it's the 1770s-80s, most of the characters believe there is one.

Set in a small town on the coast of North Carolina when Americans were fighting to throw off British rule and slavery was still embedded, Katy Simpson Smith examines the lives and times of a slave-owning family and the ructions that follow when Helen, the only child of widower Asa, the slave owner, runs away to sea with John, an older man who's been a soldier and privateer.

Helen is a young woman who knows her own mind and whose best friend, Moll, a household slave, is black.

Even so, there are social lines she won't cross, and she doesn't intercede when Asa arranges a marriage for Moll with a fellow slave.

If all this sounds like a plotline for a light literary piece devised for female readers, with Gone With The Wind histrionics, be prepared for disappointment.

It will awaken awareness of mortality, but that's everyone's reality.

• Ian Williams is a Dunedin writer and composer.