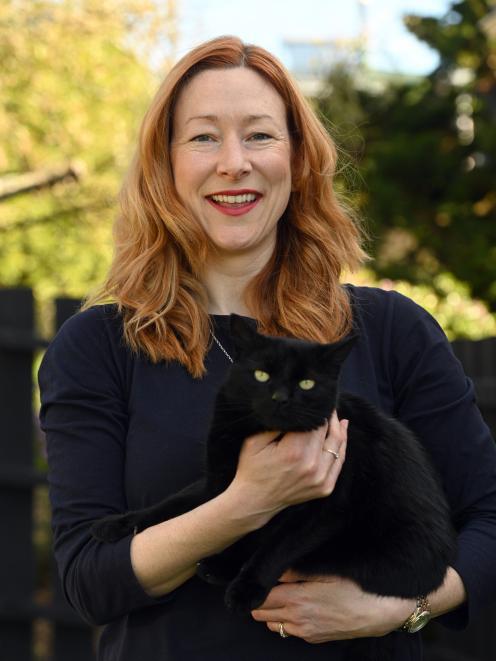 Kathryn van Beek, pictured with Bruce the orphan cat who features in two of her books, says writers can be entertaining and still inspire change. PHOTO: LINDA ROBERTSON
Whether rescuing an abandoned kitten, writing and illustrating dark, engaging stories, or lobbying parliament about miscarriage, Kathryn van Beek’s life is one of sowing good seed —  a real-time exploration of reciprocity and reproduction, writes Bruce Munro.

The seed of a successful story was there from the start.

To sprout, it only required one simple, selfless act.

It was November, 2015. Kathryn van Beek was walking near her home in central Auckland after a heavy downpour when she spotted something the size of a mouse crawling along the footpath.

It was an abandoned, day-old kitten.

Van Beek stooped, picked up the almost-lifeless waif, took it home and began feeding it with a tiny syringe.

She and her husband snapped photos of their grey "fur baby" as it lay cupped in one hand and when it opened its big blue eyes for the first time.

Posted online, the photos and the story of the orphan kitten, updated daily, went viral.

"For a few weeks there was a lot of drama about whether he would live or die," van Beek recalls.

The kitten was given a fitting name, Bruce, after Batman’s alter-ego Bruce Wayne, also an orphan. And then, surprisingly, Bruce the kitten began growing into his name; not only revealing an adventurous, capped avenger temperament but exchanging his grey suit for a glossy black one.

"He had a condition, fever coat. If the mother cat is unwell, the kittens can be born without any pigment in their coats. But then he transformed into a black cat."

Van Beek had given Bruce life. He had a gift to give in return.

Bruce’s success online — more than 40,000 social media fans across a handful of platforms — gave van Beek, an aspiring fiction writer and illustrator who had since relocated to Dunedin, the confidence that a children’s book about her kitten could be a winner.

The size of a mouse and wearing his fever coat, Bruce the orphan kitten sleeps in Kathryn van Beek's hand. PHOTO: SUPPLIED
Bruce Finds a Home was published in 2018 and became an instant bestseller. This month, the sequel, Bruce Goes Outside, and van Beek’s first collection of short stories for adults, Pet, have both been published to strongly positive reviews.

Reciprocity. Reproduction. Twin themes that can be traced in van Beek’s life and work. Even in the most difficult of times.

The year after Bruce entered their lives, the couple shifted to Dunedin and van Beek got pregnant.

Then, around the 12 week mark, she miscarried. It was the first of three miscarriages.

"But it was the first one that really knocked me," she says.

"We had been and had the scan and seen it on the screen, so it had become really real.

"I was really surprised by the grief I felt."

Nearly all miscarriages (99%) occur in the first 12 to 14 weeks of pregnancy.

Van Beek’s workplace, Otago Polytechnic, where she is an internal communications adviser, was supportive. But in looking at the Holidays Act, she noticed it was not clear whether miscarriage was covered under bereavement leave provisions.

So, she wrote to then-local MP Clare Curran and later followed up with evidence of many others who supported her call for a clarifying amendment to the Act. Curran handed the issue to up-and-coming Wellington MP Ginny Andersen who drafted and lodged a Private Member’s Bill seeking that change.

The Holidays (Bereavement Leave for Miscarriage) Amendment Bill, if it became law, would make it clear that the unplanned end of a pregnancy by miscarriage or still-birth was grounds for bereavement leave for the mother and her partner or spouse.

Private Member’s Bills go into a lottery. So, van Beek and Andersen were delighted when it was drawn out of "the biscuit tin".

The Bill has been through two of three readings in Parliament, with strong cross-party support.

"Both times it has been before Parliament, people from across the House have stood up and told their own stories, which is really amazing," van Beek says.

In the meantime, van Beek had written about her own experience of miscarriage, but under a pseudonym.

"It’s a topic that can feel strangely shameful."

She has also taken writing and front-of-camera roles in Misconceptions, a documentary web series on miscarriage.

There was no compelling personal reason for van Beek to lobby politicians for the law change. Her workplace had done well by her. But she still went ahead, on behalf of others.

Miscarriage affects one in every four women.

"Things only change if someone tries to change them.

"The law, as is, means you have to go and have a conversation with your employer to argue the case for bereavement leave.

"Hopefully the amendment will help people at a very, very lonely time to feel a bit more supported."

It is expected the Bill will have its third reading and then become law either before Christmas or in the first couple of months after Parliament resumes in February.

Sometimes, however, van Beek prods at assumptions about the mutually beneficial nature of relationships. Sometimes, with quite a sharp stick. 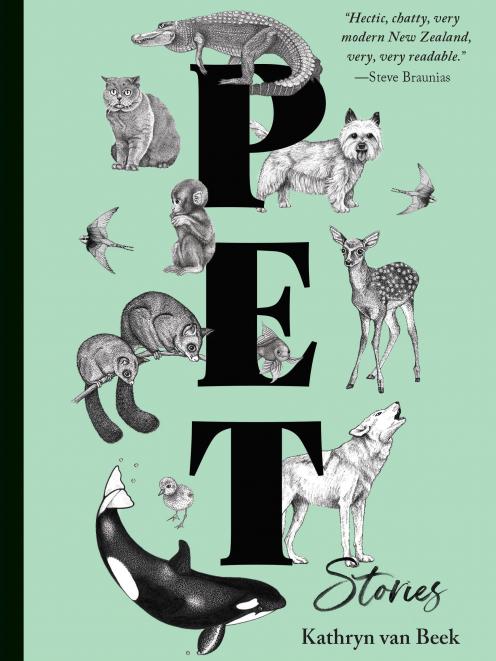 Pet, by Kathryn van Beek, published by Mary Egan Publishing
Pet, a collection of 18 short stories written and again illustrated by van Beek, is the fruit of her then-job being restructured more than seven years ago.

Van Beek had gained a master’s degree in creative writing from the University of Victoria, Wellington, before starting as a playwright who got into band- and then event-management and communications. She returned to writing when the restructuring employer sent discombobulated staff on a resilience training course.

"But it was amazing. It actually really changed my life. It got me thinking, it’s in my hands whether I want to do writing or not. I started getting up early, before work, and working on short stories; really committing myself to doing it."

The opening story, Emotional Support Animal, is a first-person piece about a woman who boards a plane without disclosing the beloved but drugged animal lodged beneath a sweater in her handbag. It is a humorous twilight tale that does not end well for all.

"I don’t have any answers ... I’m just exploring ideas," van Beek explains. "Animals do provide a lot of emotional support, that’s a big part of why people love their pets. But I think it is interesting the way we press animals into our service. Does the animal enjoy being an emotional support animal?"

The pentultimate story in the collection is Nor’wester, which was highly commended in the 2019 Sargeson Prize short story competition.

Nor’wester tells a truly dark tale of three school-aged siblings, the offspring of a too-busy working mother and a simmering timebomb father. Time and place are masterfully created and the tension palpable as the story builds to a shocking conclusion that begs crucial questions about the duty parents owe to those they bring into the world.

Not all the stories in Pet are dark and not all the male characters are unwholesome, van Beek protests.

"There are a couple of nice ones. To cleanse your palette, I can recommend The Lucky Numbers."

But some of the lighter story options, she admits, did get cut in the editorial selection process.

"I think people found the nice ones a bit more boring."

Her stories also tended to be of a grimmer nature because she was writing about things that worried her. Whether that will be as helpful for readers as it was for her, remains to be seen, van Beek says.

The value of her writing to her readers is something she thinks about a lot. It is, in fact, the subject of her doctoral thesis.

"Using writing to empower others to make a better world."

It is an intriguing idea and a lofty goal; a notion that ties together various strands of van Beek’s life.

The act of writing is a type of birth, a reproductive act. Writing to motivate others to act for the benefit of the world in which writer and reader exist is reciprocity on a potentially grand scale.

"Not all of Pet was written with that in mind. Because I’m only one year into the doctorate. But that is something I’ve come to over time.

"What can I do to make my own small difference? Well, writing is the tool I’ve got."

How best to achieve that is something she is exploring in real time. She is concerned about how we treat the environment, how we treat animals and how we treat each other.

"I guess that’s why Pet ended up darker, because it’s a way of helping me process things I’m worried about. But what I’m not sure about is whether that’s a helpful way to write about dark issues."

Some of her research suggests "people who read dismal stuff all the time" can end up feeling hopeless. Whereas, writing that offers a positive way to respond to challenges might help people feel hopeful and energised.

"That might change how I write in the future, based on how people respond to Pet.

"You don’t want to be didactic or annoying with your writing, you want to be entertaining.

"Some of the most beautiful books you read do change you or inspire you to think about things differently."

Bruce is now almost 5. He continues to give van Beek plenty of fuel for fiction, reproducing his sometimes naughty adventures in pictures and rhyming prose that subtly communicate the value of kindness to creatures.

"You can take the cat off the street, but you can’t take the street out of the cat."

Not that Bruce always acts as though he fully appreciates the reciprocity at play in his pampered Port Chalmers life.

"He has to be locked in at night, but he’s mastered the pitiful miaow, ‘You’re ruining my life!’."