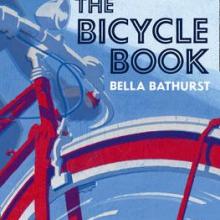 THE BICYCLE BOOK<br><b>Bella Bathurst</b><br><i>Harper Press</i>
When Bella Bathurst wanted a new bike, she took a course and built her own frame.

Her book starts with an account of this process and unfortunately she lost me for a time, as it really was a case of too much information. I suppose she wanted to establish her ''bike cred'' from the outset.

When I finally picked up the book again, I found it's actually a good read for a bike nut. It won't tell you how to pull your disc brakes to bits or how to join a broken chain - it's a collection of interviews with people who ride for business or pleasure and attempts to capture the joy of cycling.

Bathurst grilled a London barrister who rode a Tour de France Etape, a stage opened up to amateurs (not on the day the pros come through). The lawyer and 200 other women battled over the mountainous 190km stage trying to stay over the 19kmh minimum speed limit (transgressors are ordered off the course and into the ''broom wagon'').

The women had along for company on their 12-hour ride no fewer than 8300 testosterone-charged blokes. In my experience as a recreational cycling events organiser, most women don't like to race but a large number do like to ride. Bathurst flits from place to place looking at cycling in such places as India (she found the traffic was ''crazy'' as she tried pedalling a rickshaw in Calcutta) and the Netherlands (''nirvana'' for cyclists).

She investigates why women had to cycle in their underwear (bloomers) initially because corsets and cycling didn't mix, explores what bike seats are doing to certain parts of the male anatomy and includes a brilliant description of what makes a great racing cyclist (no mention of EPO here).

She looks at the use of bikes in war - including how some German riders were killed by their own bike pumps - delves into the minds of London bike couriers and contends that mountain-biking wasn't invented in California in the 1970s as widely believed but in the Welsh high country about 1890 when tough riders chose to ride their new bikes over mountains in snowstorms.

Sounds like a Dunedin ride in winter, although we have a few more gears to get up the hills. This book is an interesting assortment of cycling stories bound to entertain and inform - just the ticket for those long winter nights when you just can't face heading out for a ''lights on'' ride.

- John Fridd is a Dunedin journalist and keen mountain-biker.