Why Frame spared the 'verbal DDT' 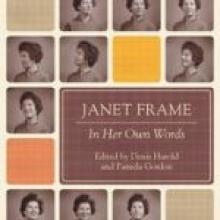 This elegant little book, in hardcover but the size of a traditional Penguin paperback, collects a wide range of Janet Frame's non-fictional prose, some of it not previously published, that should appeal to readers of her fiction, poetry and autobiography.

The first half of the book is made up of all her published essays and excerpts from newspaper and magazine interviews and interview-based profiles, including some of her unpublished notes in preparation for interviews and some remarks about them in letters.

The second half includes more miscellaneous material: letters to the editors of magazines; speeches and reports written for book launches, awards, fellowships, etc; a brief selection from her unpublished correspondence concerning her books and reviews of them; some previously unpublished notes and essays ; and a handful of unpublished poems and stories dealing with writing.

All told, there are over 100 items in 260 pages, all "in her own words" and all dealing with writing and the writing life. In the preface "Frame Unframed", Pamela Gordon emphasises the texts "will challenge the many inaccuracies about Janet Frame that are disseminated even by apparently reliable sources", while Denis Harold in his introduction states that "As well as being a de facto manifesto of her practice, this volume may be read as a handbook on the discipline of writing".

In her writing and speaking about writing, as in the 1983 radio interview with Elizabeth Alley, Frame said that "The whole of writing is expressing an emerging pattern and shape" and that "the real joy" comes when "as one is writing a pattern grows and everything seems to fall into place", and that "the seeing it and seeing it's there ... is the motivation to write it."

The reader of this volume can find a kind of secondary experience of that joy in seeing the patterns that emerge from the book, patterns that are the expression of the unique sensibility from which "her own words" came.

One of those patterns has to do with metaphor. Writing to Charles Brasch in 1964 about Owen Leeming's comment in a Landfall review of Scented Gardens for the Blind she had "a weakness for metaphor", she protested "but isn't the need to compare, to perceive relationships the source of all art?", and confessed "I'm afraid I breathe metaphors, mostly bad or indifferent, it is the obsession with images which prompts me to write".

She went on to use an elaborate metaphor about the way the "path to good prose" possibly can be more beautiful if "the wayside is bare ... with no images blossoming in the hedgerows" but said she lacked "the verbal DDT" to do that, which perhaps made her "a bad novelist", but then she was most of the time "not taking the narrative path".

The metaphor about metaphors may not be entirely consistent, but it suggestively points to the way her novels are not patterned so much by plot as by recurring images and motifs, and the non-fictional prose similarly gets its structure and its best moments often from images, as when she ends her essay on her relation to the world of literature with the metaphorical statement that the writer must repeatedly visit the land of literature but not "set up house" there, even though it may offer "a lifetime of spectator pleasure" with its view of the world, but rather must "go alone through the gateway entered or arrived at, out into the other 'world', with no luggage but memory and a pocketful of words, some of which may be like shells crumbled to sand before the incoming waves, while others may be jewels - turquoises - that time has shown to be the teeth of dead mastodons".

There are many other patterns to be discerned - the pattern of Frame's idiosyncratic sense of humour and her sharp satirical eye, evident in her letter to the Listener about the criticism of Owls Do Cry or in her wonderful parody of a New York author interview; or there is the thematic pattern of her complex and evolving feelings about her native country, ranging from her powerfully blunt statement in the unpublished "Notes for Interviews" that she could not be "completely at home" in a country in which she had been "in danger of being destroyed by people who decided it was their right to try to make [her] become what they wanted [her] to become", to her statement in the unpublished note, "The new book", that a "moment of birth" has come "quietly without ceremony in New Zealand", a time of "spiritual force" in which people feel "this strength of the country's being itself, and recognising it to be so".

Many other patterns are there to be discovered and savoured. The editors have assembled an essential book to accompany and cast light on the rich literary heritage Janet Frame left us.